For muster in and out dates, see individual batteries below.

The following is taken from New York in the War of the Rebellion, 1st ed. Frederick Phisterer. Albany: J. B. Lyon Company, 1912.

This regiment was organized at Elmira to serve three years; it received its numerical designation October 16, 1861. Eight companies, commanded by Col. Guilford D. Bailey, left the State October 31, 1861, Companies I, K, L and M November 21, 1861. At the expiration of its term of service, those entitled thereto were discharged, and the regiment continued in service. Its service was as light artillery and by batteries in the Armies of the Potomac, Virginia, the Cumberland and Georgia. The field and staff were mustered in the service of the United States at Elmira, October 17, 1861, and honorably discharged and mustered out under Col. Charles S. Wainwright at Elmira, June 21, 1865.

First Artillery.—Cols., Guilford D. Bailey, Charles S. Wainwright; Lieut. -Cols., Henry E. Turner, Charles S. Wainwright, Edward R. Warner; Majs., Charles S. Wainwright, J. Watts De Peyster, Jr., Robert Fitzhugh, Luther Kieffer, John A. Reynolds, David H. Van Valkenburgh, Thomas W. Osborne. This regiment of light artillery was organized at Elmira in the fall of 1861 and was composed of companies recruited in the counties of Oswego, Oneida, Onondaga, Chemung, Steuben, Monroe, Wayne, Erie, Niagara, Jefferson, St. Lawrence, Lewis and Herkimer. It was mustered into the U. S. service from Aug. 30 to Nov. 20, 1861, for three years. Eight companies, under command of Col. Bailey, left the state on Oct. 31, and 1, K, L and M on Nov. 21. Its service was by batteries in the Armies of the Potomac, Virginia, the Cumberland and Georgia. At the expiration of the term of service, the original members, except veterans, were mustered out and the organization composed of veterans and recruits remained in service. Both Col. Bailey and Maj. Van Valkenburgh were killed in action at Fair Oaks, Va., May 31, 1862.

For histories of batteries see individual batteries below. 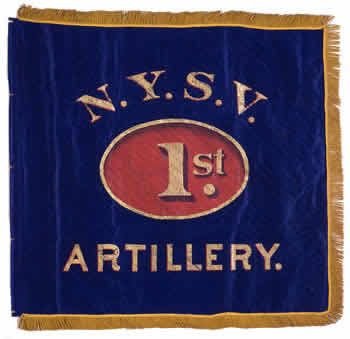 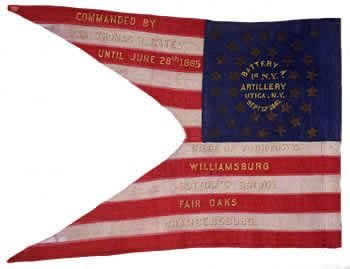 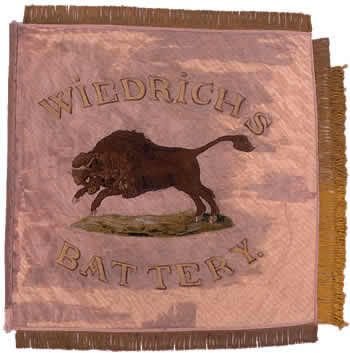 In March 1864, Battery I received this silk, two-sided flag from “friends of the Company.” Exposure to harmful light rays caused the flag’s color to… 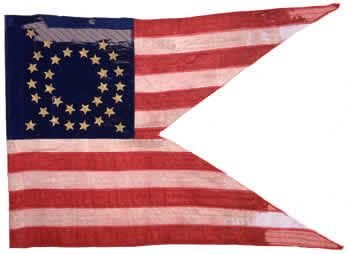 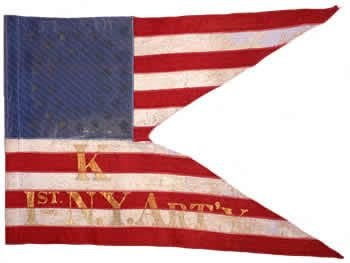 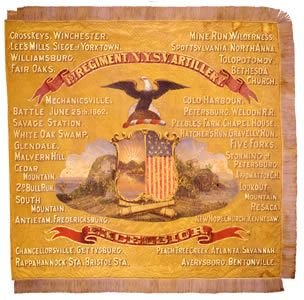 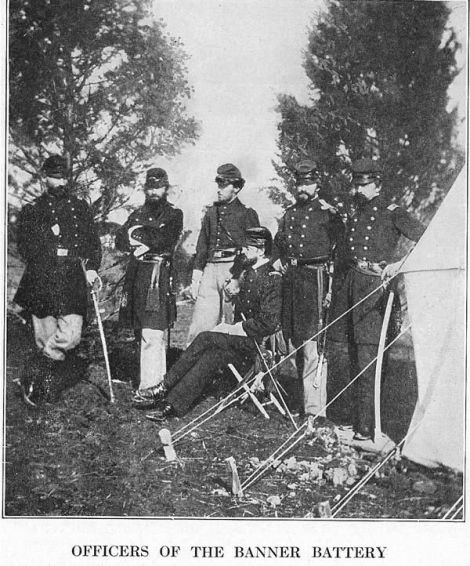 1st Artillery Regiment (Light) Civil War Officers of the Banner Battery I, 1st New York Light Artillery
Not long after this picture was taken, the names of most of these men were mentioned in despatches [sic]. Against Major D. H. Van Valkenburgh, the gallant soldier leaning on his saber, his arm thrust into his coat, was written, "killed in action at Fair Oaks." Taken from Photographic History of the Civil War Volume I The Opening Battles, Francis Trevelyan Miller, editor-in-chief. New York: the Trow Press, 1911, page 295. 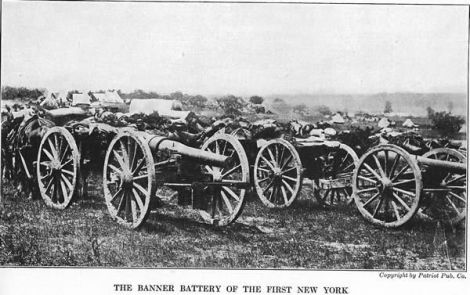 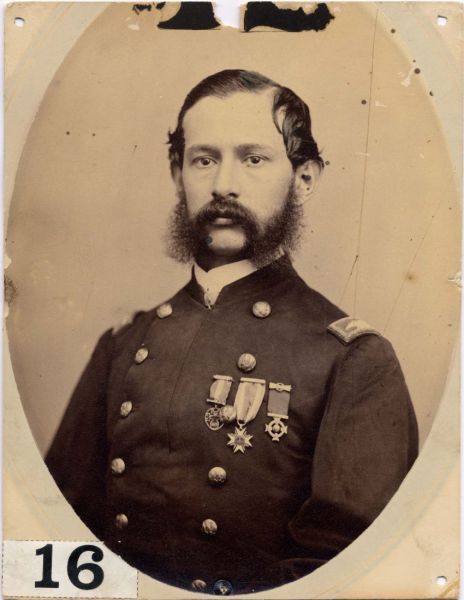 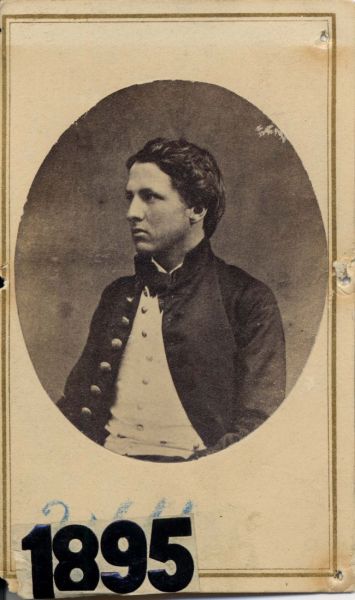 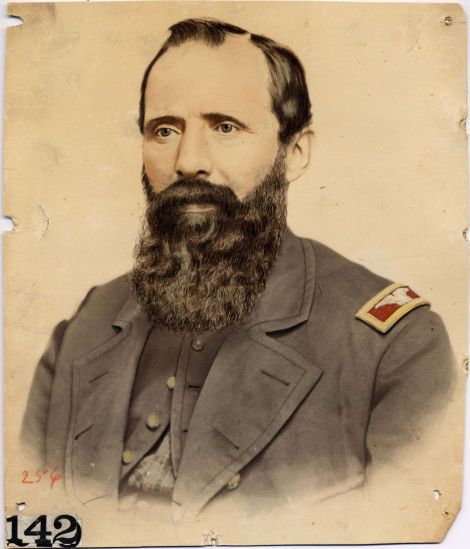 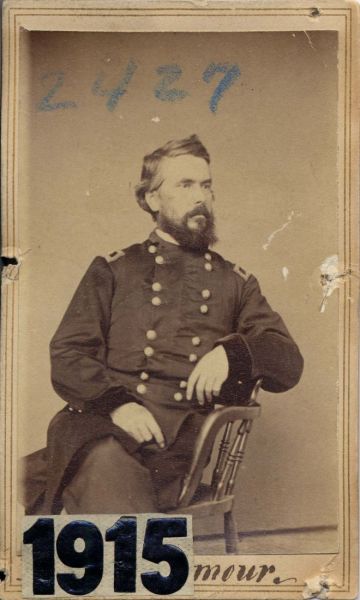 Shelton, William Henry. Letter, 13 May 1865.
4 pages.
Letter, 13 May 1865, from William Henry Shelton, 1st New York Light Artillery, near Alexandria, Virginia. Topics include troop movements through Alexandria, Fairfax, Fredericksburg, and Richmond, Virginia. He describes destruction in Richmond, ladies in Bowling Green and their views of the “Yankees,” and historical sites he saw in Virginia.
Accession 43353. Located at the Library of Virginia in Richmond, Virginia.
Thank you to Ed Worman for pointing out this resource.

Shelton, William Henry. Letter, 10 June 1863.
8 pages.
Letter, 10 June 1863, from William Henry Shelton (1840-1932?), 1st New York Light Artillery, near White Oak Church, Virginia, to an unidentified female recipient. Shelton apologizes for not writing sooner, gives his opinion of General John Charles Fremont (1813-1890), writes about his unit being under orders to march at any moment, comments on her recent visits with friends, and he asks her to send her photograph.
Accession 43657. Located at the Library of Virginia in Richmond, Virginia.
Thank you to Ed Worman for pointing out this resource.