In 1912 the New York State National Guard was organized into a Divisional format, which meant that groups of its regiments would be placed together under a larger organized unit, in a manner similar to that of the regular army. This new Division would eventually become the 27th Infantry Division. On June 16th, 1916 the New York State National Guard Division was mobilized and moved to the Mexican border to participate in Brigadier General John Pershing’s sortie into Mexico. The Division, known initially as the New York Division and then as the 6th Division remained in Mexico until March of 1917 when it was recalled to New York in preparation for possible service in Europe. In late April of 1918, the Division was transported to Europe where it fought gallantly for the remainder of World War I.

The 27th Infantry Division was federalized for service on October 15th, 1940 and initially commanded by Major General William Haskell. At this time it still retained its WWI organization of two brigades and four regiments. The 53rd Brigade consisted of the 105th and 106th Infantry regiments while the 54th Brigade contained the 108th and 165th Infantry regiments. Following a lengthy period of maneuvers and training, the 27th was ordered to California in December following the Japanese bombing of Pearl Harbor. While in California the 27th awaited orders to ship out and concentrated on bringing itself up to the authorized field strength of 1,012 officers and 21,314 enlisted men. The Division’s strength had been reduced by discharges to around 14,000 men. The first elements of the Division boarded ships bound for Hawaii on February 27th 1942, the first Infantry Division to leave the states following Pearl Harbor.

The Division remained on Hawaii for a number of months, during which time it was triangularized, with the 108th Infantry regiment being reassigned to the 40th Division. A Division that has been triangularized has been given three infantry regiments instead of the four of a square Division. This final reorganization dismantled the brigade structure and again dropped the Division’s strength to 14,000 men. Following the reorganization, the 27th Division was shifted to Oahu, where it would relieve the 25th Infantry Division, which was slated to join the U.S forces fighting in Guadalcanal. For most of its time in Hawaii, the 27th was under the command of Brigadier General Ralph Pennel.

On November 20th 1943, the 27th Infantry Division embarked on its first combat assignment, the capture of the coral atoll of Makin. The 27th also had a new Division commander, Major General Ralph Smith. Units from the 27th Division also occupied the Majuro atoll on February 1st 1944 and successfully assaulted Eniwetok Island on February 19th of the same year. In June 1944, the Division landed on Saipan, where its regiments fought together for the first time as a full Division. Following Saipan the Division was rested and reinforced at Espirto Santo for seven months before any further operations. During this time the 27th received its final Division commander, Major General George Griner Jr * . On April 9h, 1945 the Division landed on Okinawa, where it would remain until September when it was sent to Japan briefly for garrison duty. The Division was mustered out in late December of the same year. Since its arrival in the Pacific, the 27th Infantry Division had suffered 1,512 killed in action, 4,980 wounded in action and 332 who later succumbed to their wounds.

General Smith had been removed from command following a dispute with the aggressive and eccentric Marine commander, General Holland “Howling Mad” Smith who had been in overall command of the Saipan invasion. Holland Smith claimed that Ralph Smith had disregarded orders and mishandled the 27th Division, prompting the relief order. Later court of inquiry showed that the charges were for the most part unsubstantiated and General Ralph Smith was quickly given a new command.

Men who were federalized in 1940

The National Guard In War:  An Historical Analysis Of The 27Th Infantry Division (New York National Guard) In World War II, By Charles S. Kaune, MAJ, USA.
A thesis presented to the Faculty of the U.S. Army Command and General Staff College 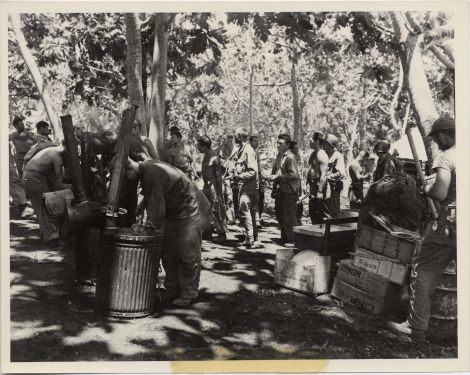 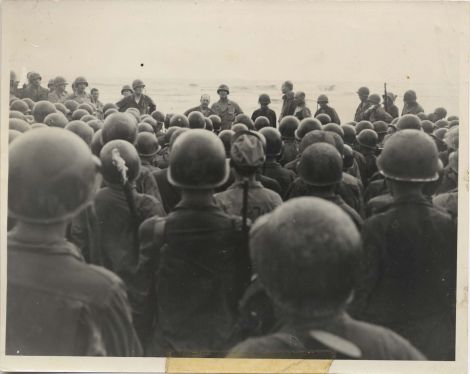 Lt. Gen. Robt. C. Richardson speaks to the troops of the 27th Div. during his tour of inspection. 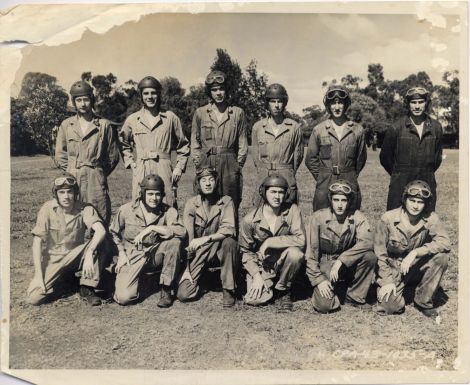 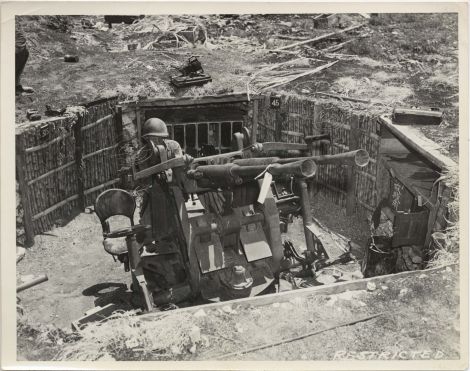 For a full listing of resources please search our online catalog.