Under authority of the President, dated May 18, 1861, Mr. Daniel E. Sickles recruited and completed this brigade in the summer of 1861 at considerable personal expense, notwithstanding many obstacles were in his way.

These regiments were turned over to the State as part of its volunteer force, and, in accordance with the orders of the Secretary of War of December 5, 1861, were numbered by the State authorities, December 11, 1861; they served together while in service as the Excelsior or Sickles' Brigade in the 3d and 2d Corps, and Col. Daniel E. Sickles was successively appointed Brigadier and Major-General, U. S. Volunteers, and disabled (loss of right leg) at the battle of Gettysburg, Pa.

There were, also, recruited for the brigade two batteries, the 1st and 2d Excelsior Batteries; a third battery, not completed, was consolidated with the 2d; these two batteries received the State designation, 5th and 10th Independent Batteries, respectively.

The above is taken from New York in the War of the Rebellion, 3rd ed. Frederick Phisterer. Albany: J. B. Lyon Company, 1912. 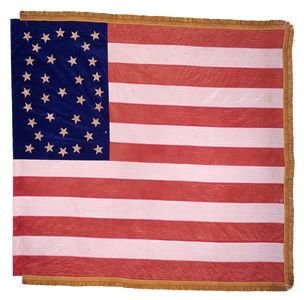 The national color seen here, carried by the Excelsior Brigade during the 1862 Virginia campaigns and reportedly made by Evans & Hassall in…

To Bleed for a Higher Cause: The Excelsior Brigade and the Civil War, by Francis Butler