This regiment was organized at Camp Decker, Staten. Island, under the special authority granted by the War Department to Gen. Daniel E. Sickles, and July 25, 1861, to Col. William R. Brewster by the consolidation of men recruited by Col. James Fairman, under authority from the War Department, dated August 19, 1861, for the Fourth Excelsior Regiment, and the men recruited for the Second Fire Zouaves by Col. John Baulch, succeeded by Colonel Brewster. It received its State numerical designation December 11, 1861, in accordance with the orders of the Secretary of War of December 5, 1861. The regiment was recruited principally in New York City and of members of the fire department, and it was mustered in the service of the United States for three years at Camp Decker, between July 8 and October 8, 1861. In the fall of 1862, a new company joined the regiment and took the letter C; January 20, 1863, Company G was transferred to E, and the members of the 163d Infantry, six companies, 375 men, received by consolidation as follows: the men of Company C, 163d Regiment, went to Companies A and B, 73d Regiment, those of D to A, F and I; of F to C, D and K; of A to D and G; of B to G; of E to F and I. At the expiration of its term of service the men entitled thereto were discharged, and the remainder consolidated into seven companies, A, B, E, F, G, H and I, and retained in service. June 1, 1865, it received by transfer the enlisted men of the 120th Infantry, not mustered out with their regiment.
The regiment left the State October 8, 1861; served in Sickles' Brigade, Hooker's Division, Army of the Potomac, from October, 1861; in same, 2d, Brigade, 2d Division, 3d Corps, Army of the Potomac, from March, 1862; in 2d Brigade, 4th Division, 2d Corps, Army of the Potomac, from April, 1864; in 4th Brigade, 3d Division, 2d Corps, Army of the Potomac, from May 13, 1864; in 1st Brigade, 3d Division, 2d Corps, Army of the Potomac, from July, 1864; and it was honorably discharged and mustered out, under Col. Michael W. Burns, June 29, 1865, near Washington, D. C.
During its service the regiment lost by death, killed in action, 12 officers, 107 enlisted men; of wounds received in action, 5 officers, 29 enlisted men; of disease and other causes, 2 officers, 74 enlisted men; total, 19 officers, 260 enlisted men; aggregate, 229; of whom 15 enlisted men died in the hands of the enemy.

Seventy-third Infantry.—Cols., William R. Brewster, Michael W. Burns, James Fairman; Lieut.-Cols., William McCanley, Michael W. Burns, James McKenna, Lewis Benedict, Jr.; Majs., Michael W. Burns, John P. Lawrence, Lawrence H. Thompson, John D. Moriarty. The 73d, the 4th regiment of the Excelsior brigade, was sometimes known. as the 2nd Fire Zouaves, having for its nucleus, the New York fire department. It was recruited principally in, New York city and mustered into the U. S. service at Staten island, July 8 to Oct. 8, 1861. It left New York for Washington Oct. 8; was assigned to Sickles' brigade, Hooker's division, which became-in March, 1862, the 2nd brigade, 2nd division, 3d corps of the Army of the Potomac, and served during the first winter at Good Hope, Md. It moved to the Peninsula with McClellan's army in April, 1862; participated in the siege of Yorktown and the battle of Will-iamsburg, meeting with its first severe loss in the latter engagement, where 104 of the regiment were killed, wounded or reported: missing and the troops displayed great courage and steadiness. At Fair Oaks and during the Seven Days' battles the 73d was constantly in action and was much in need of rest by the time it reached the camp at Harrison's landing. On its way from the Peninsula to join Pope's forces the brigade had a sharp engagement at Bris-toe Station, in which the regiment lost 46 killed or wounded. It was active at the second Bull Run, was then withdrawn to the defenses of Washington with the Excelsior brigade to recuperate, and left for Falmouth in November. In the autumn of 1862 a new company joined the regiment and in Jan., 1863, it received the members of the 163d N. Y. infantry into its ranks. The 73d was active at Fredericksburg; returned to its quarters at Falmouth; engaged at Chancellorsville in May, 1863, but met its greatest losses at Gettysburg on the second day of the battle, where 51 were killed, 103 wounded and 8 missing out of 324 engaged, or 50 per cent. The loss of the regiment at Gettysburg included 4 officers killed and I wounded, and during its term of service it lost 18 officers killed or mortally wounded, a loss only exceeded by four other regiments in the army. It was engaged at Wapping heights, Catlett's station, Brandy Station, at Kelly's ford and Locust Grove, and went into winter quarters at Brandy Station. During the winter of 1863-64 a sufficient number of men reenlisted to secure the continuance of the regiment in the field as a veteran organization and in April, 1864, camp was broken for the Wilderness campaign, in which the regiment served with the 2nd brigade, 4th division, 2nd corps until May 13, when it was assigned to the 4th brigade, 3d division, 2nd corps. It lost 66 in the first two days' fighting in the Wilderness, 30 at Spottsylvania, and continued in service during the battles leading up to Petersburg. At the expiration of their term of service the original members not reenlisted were mustered out and the veterans and recruits consolidated into seven companies, which served from July in the 1st brigade of the same division before Petersburg, where the regiment participated in the various engagements of the brigade, the final assault and pursuit to Appomattox. The 73d was mustered out at Washington, June 29, 1865, having received on June 1, the veterans and recruits of the 120th N. Y. infantry. The total enrollment of the regiment was 1,326, of whom 153 died from wounds and 76 died from accident, imprisonment or disease. The regiment sustained its part nobly in a brigade which became famous for its fighting qualities and well deserves its reputation as a crack fighting regiment. 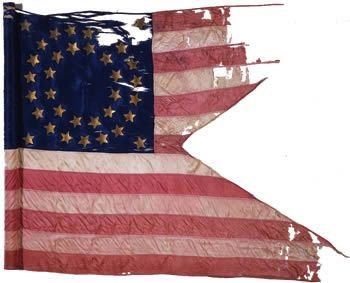 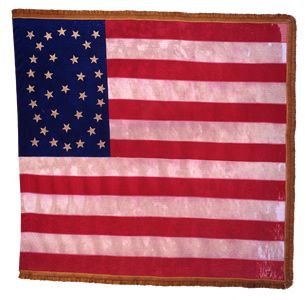 This flag carried by the 73rd New York Volunteers, or “Fourth Excelsior,” includes 34 gold-painted stars in a pattern typically found on national… 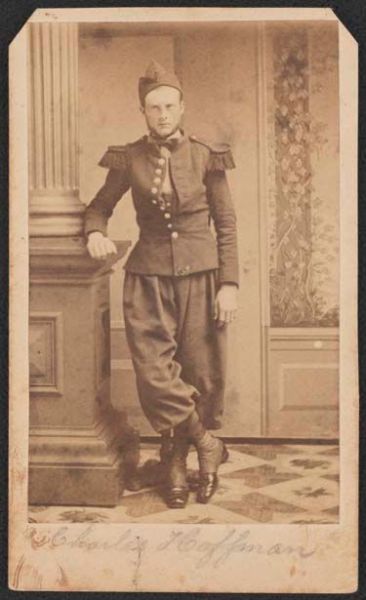 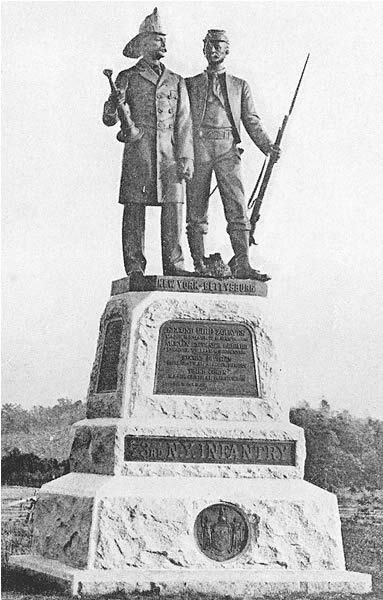 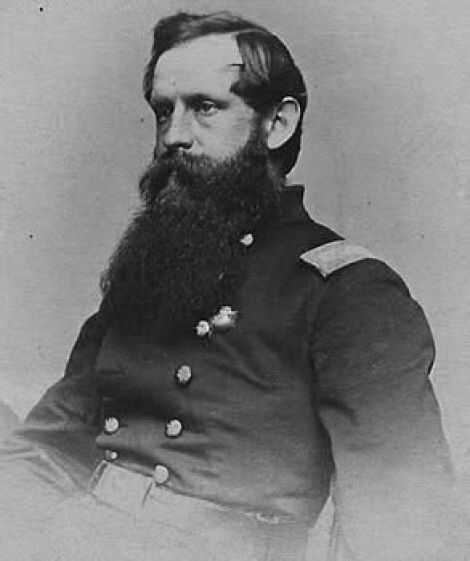 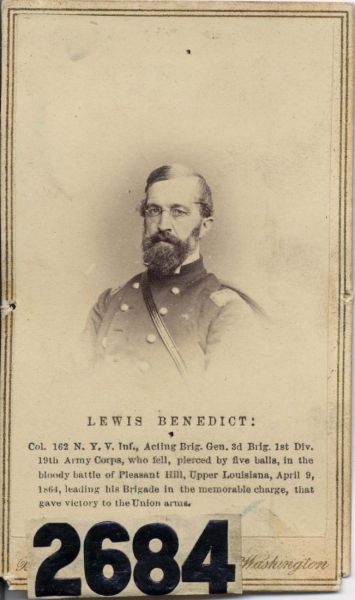 Benedict, Lewis. Papers,1858-1868.
Description: 1 box.
Abstract: The collection contains a limited amount of genealogical and historical material on the Benedict family, two scrapbooks containing military papers and some of Lewis Benedict's personal papers. The collection also contains several items of military memorabelia including colonel's epaulets, a pair of spurs, printing blocks of Benedicts tomb, and an 1856 map of Mississippi.
Note(s): Lewis Benedict was a Lieutenant Colonel of the 73rd New York volunteers and was Colonel of the 162nd New York volunteers during the U.S. Civil War. He was killed in action in 1864 during the Red River Campaign in Louisiana. He was postumously promoted to Brevet Brigadier General.
General Info: Preferred citation: Lewis Benedict Papers, 1858-1868./ Unpublished guide available in repository.
Located at the New York State Library Manuscripts and Special Collections.

Davis Family. Davis family papers (collected by Mrs. E.E. Davis),
1771 and 1864-1965.
Description: 1 folder.
Abstract: Family letters and documents, collected in part by Mrs E. E. Davis; include indenture, 1771; also Civil War letters of John McIsaac of the 5th Michigan Infantry, and of New York family members, Patrick Moran and Frank Moran, an officer with the 73rd New York Regiment who wrote one letter as a prisoner of war from Libby Prison.
Located at the Bentley Historical Library, University of Michigan.

Ellsworth, Elmer Ephraim. Papers,[184-]-1935 (bulk 1859-1861).
Description: 9 folders (97 items)
Abstract: The collection includes a few papers relating to Ellsworth's early life: his first composition, letters of recommendation for clerical jobs, and letters to and from family and friends. The largest portion of the papers are products of his military career and include letters to and from various government officials and militia officers around the country about the Cadets and organization of other zouave units; papers relating to Cadet business, social activities, and tour; papers relating to the 73rd New York Infantry (Fire Zouaves); lists of officers and men; manuals of arms and notes and diagrams relating to military drill; lists of equipment and uniforms; illustrations of zouave uniforms; newspaper clippings about Ellsworth and the Cadets; addresses to his troops; a few letters on temperance; papers concerning the proposed national militia bureau; and a photograph of Ellsworth in uniform. There is also a quantity of material relating to his death: newspaper clippings; letters from his fiancée, Carrie M. Spafford, to his family; letters and resolutions of sympathy from individuals and military and fire companies; postcards depicting his death and related scenes; and a typescript essay, "A hero of '61", by E.E. Jones (final pages missing).
Note(s): Bio/History: Generally considered to be the first man killed in the Civil War.
Located at the Rosenbach Museum & Library, Philadelphia, PA.

Moran, Frank E. Bastiles of the Confederacy, a reply to Jefferson Davis, being a narrative of the treatment of Union prisoners in the military prisons of the South during the War of the rebellion. Baltimore: [1890].