The following is taken from The Union army: a history of military affairs in the loyal states, 1861-65 -- records of the regiments in the Union army -- cyclopedia of battles -- memoirs of commanders and soldiers. Madison, WI: Federal Pub. Co., 1908. volume II.
Seventy-fourth Infantry.—Cols., Charles K. Graham, Charles H. Burtis, Thomas Holt, William H. Lounsberry; Lieut.-Cols., Charles H. Burtis, John P. Glass, William H. Lounsberry; Majs., William B. Olmsted, Edward L. Price, George H. Quaterman, Henry M. Allis, Lovell Purdy, Jr. The 74th, the 5th regiment of the Excelsior brigade, which contained many members of the l5th militia, was recruited at Pittsburg, New York city, Cambridgeport, Mass., Tidioute, Pa., and Long island and mustered into the U. S. service at Camp Scott, L. I., June 30 to Oct. 6, 1861, for a three years' term. It left New York Aug. 20, for Washington; was attached to Sickles' Excelsior brigade and stationed along the Lower Potomac in Maryland during the first winter; embarked in April, 1862, for the Peninsula with the brigade, as part of the 2nd division, 3d corps; shared in the siege operations before Yorktown; took a prominent part in the battle of Williamsburg, for which the brigade won the highest praises, the loss of the regiment in this bat-tle being 143 killed, wounded or missing, and in the ensuing engagements of Fair Oaks and the Seven Days' battles it was constantly in action. Upon its withdrawal from the Peninsula in August, the regiment was sent to the support of Gen. Pope at Manas-sas, after which it retired to the defenses of Washington. In November it marched to Falmouth; participated in the battle of Fredericksburg; returned to its camp at Falmouth for the winter; was engaged at Chancellorsville in May, 1863; returned again to camp at Falmouth; marched in June to Gettysburg and there experienced the hard fighting of the second day on the Emmitsburg road, with a loss of 89 killed, wounded and missing. On the southward march it encountered the enemy at Wapping heights and Kelly's Ford; fought at Locust Grove during the Mine Run campaign, and went into winter quarters with the brigade. In April, 1864, the Excelsior brigade became the 2nd brigade, 4th division, 2nd corps and in May the 4th brigade, 3d division, 2nd corps. With it the 74th fought through the Wilderness campaign and was mustered out before Petersburg, from June 19 to Aug. 3, 1864. . The reenlisted men and recruits were transferred to the 40th N. Y. infantry. The regiment lost during its term of service 124 by death from wounds and 70 from other causes. It was noted for its courage and steadiness and is numbered among the "three hundred fighting regiments." 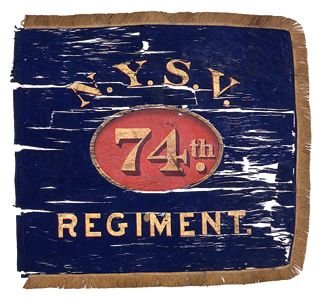 This blue silk presentation flank marker includes gold-colored painted inscriptions, shadowed in red, along the top and bottom and a red painted oval…

Dennis, William.
Description: 1 box (.25 cu. ft.).
Abstract: Group of letters sent to Dennis's brother regarding the Peninsular Campaign and the Seven Days Battle. These letters also offer an interesting perspective on the attitudes and morale of Irish-American soldiers.
Located at the New York State Library Manuscripts and Special Collections.