The following is taken from New York in the War of the Rebellion, 3rd ed. Frederick Phisterer. Albany: J. B. Lyon Company, 1912.
This regiment, raised under special authority from the War Department, granted to Gen. D. E. Sickles, May 18, 1861, was organized, under Col. Nelson Taylor, at Camp Scott, Staten Island, and there mustered in the service of the United States for three years in June, July, August, October and November, 1861. One company of the 68th Militia (Dunkirk) formed part of this regiment. Pursuant to the order of the Secretary of War, dated December 5, 1861, it received its State numerical designation December 11, 1861. Company L was transferred to Companies A, I and K February 25, 1862. The men not entitled to be mustered out with the regiment were formed into a detachment which, from June 20, 1864, served with the 120th Infantry, to which the remaining men were, in November, 1864, finally transferred.
The companies were recruited principally: A and K in New York city; B at Jamestown; C in Vermont; D and E at Dunkirk; F at Newark, N. J.; G at Westfield; H at Dunkirk and New York city, and I at Delhi. Company L was recruited principally in New Jersey, Massachusetts, Delhi, Sinclairsville and Plattsburg.
The regiment, except Companies H and L, which joined October 25, 1861, left the State July 24, 1861; served at and near Washington, D. C, in a provisional brigade, from July, 1861; in Sickles' Brigade, Hooker's Division, Army of the Potomac, from October 15, 1861; in same, 2d, Brigade, 2d Division, 3d Corps, Army of the Potomac, from March, 1862 in 2d Brigade, 4th Division, 2d Corps, Army of the Potomac, from April, 1864; in 4th Brigade 3D Division, 2d Corps, Army of the Potomac, from May 13, 1864; the companies remaining attached to the 120th N. Y. Volunteers, in the 3d Brigade, 3d Division 2d Corps Army of the Potomac, from July, 1864. Companies A, B, D, E, F, I and K, under command of Lieut Col. John Leonard, were honorably discharged and mustered out June 19 and 20, 1864, before Petersburg, Va.; Companies G, C and H, remaining, were mustered out July 2 and 20 and October 31, 1864, respectively.
During its service the regiment lost by death, killed in action, 7 officers, 111 enlisted men of wounds received in action, 5 officers, 51 enlisted men; of disease .and other causes, 1 officer, 95 enlisted men; total, 13 officers, 257 enlisted men; aggregate, 270; of whom 10 enlisted men died in the hands of the enemy.

The following is taken from The Union army: a history of military affairs in the loyal states, 1861-65 -- records of the regiments in the Union army -- cyclopedia of battles -- memoirs of commanders and soldiers. Madison, WI: Federal Pub. Co., 1908. volume II.
Seventy-second Infantry.—Cols., Nelson Taylor, William O. Stevens, John S. Austin; Lieut.-Cols., Israel Moses, John S. Austin, John Leonard; Majs., William O. Stevens, John Leonard, Casper K. Abell. The 72nd, the 3d regiment of the Excelsior brigade, was composed mainly of members from New York city and Chau-tauqua county, and was mustered into the U. S. service at Camp Scott, Staten island, from June to Oct., 1861, for three years. It left there on July 24, 1861, for Washington, where it was joined by two of its companies late in October. After serving for a few months in the vicinity of Washington the regiment was assigned to Sickles' Excelsior brigade, Hooker's division, served along the Potomac in Maryland, near Stafford Court House, Va., and proceeded to the Peninsula in April, 1862, with the 2nd brigade, 2nd division, 3d corps. It suffered its first severe loss at Williamsburg, where the Excelsior brigade bore the heaviest burden of the battle, the loss of the 72nd being 195 killed, wounded or missing, 77 of whom were killed or mortally wounded. At Fair Oaks and in the Seven Days' battles the regiment was active and was then withdrawn from the Peninsula to join in the campaign under Gen. Pope in Virginia, during which it lost 37 men. It was withdrawn with the brigade to the vicinity of Washington for much needed rest and reinforcement, and remained there through the Maryland campaign, leaving for Falmouth in November. It participated in the battle of Fredericksburg; went into winter quarters at Falmouth; broke camp late in April, 1863, for the Chancellorsville movement; took a prominent part in that battle, Col. Stevens and 4 other officers being killed, the total loss of the regiment being 101. At Gettysburg the regiment, which had by this time become noted for its fighting qualities, occupied an advanced position on the Emmitsburg road, which was valiantly defended by the brigade, although finally forced to yield it. The loss of the 72nd: here was 114, and the ranks, which later fought at Kelly's ford, Bristoe Station and in the Mine Run campaign, were sadly thinned. The winter camp was established at Brandy Station and in April, 1864, the regiment was assigned to the 2nd brigade, 4th division, 2nd corps, with which it served in the Wilderness campaign until May 13, when it was transferred to the 4th brigade, 3d division. It was active in the campaign until June 19, when seven companies were mustered out before Petersburg. The remaining three com-panies were mustered out July 2 and 20 and Oct. 31, 1864, the veterans and recruits being transferred to the 120th N. Y. infantry. During its term of service the regiment lost 184 by death from wounds and 96 by death from other causes. It is ranked by Col. Fox as one of the "three hundred fighting regiments." 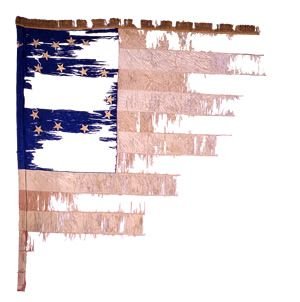 Less than 50% remains of this faded, silk national color carried by the 72nd Regiment New York Volunteer Infantry, or “Third Excelsior.” Organized by…

Miller, J. Michael. "The Battles of Bristoe Station." Blue & Gray magazine  XXLI:2 (2009).
Thank you to H. T. Schafer for pointing out this resource.

Taylor, Nelson. Letter.
Located at the Manansas Nationa Battlefield Library.
Thank you to H. T. Schafer for pointing out this resource.