This regiment was accepted by the State May 9, 1861, and designated the 15th Regiment of Infantry. It was organized in New York city, and there mustered in the service of the United States for two years June 17, 1861. The regiment was intended and recruited for an engineer regiment, and was converted to that arm of the service by the War Department October 25, 1861. In January, 1862, Company I was reorganized of three years' recruits. June 18, 1863, the three years' men in the regiment were transferred to Companies A, B and C, and June 25, 1863, the two years' men of these three companies and all the other companies, their term of service having expired, were, commanded by Col. Clinton G. Colgate, honorably discharged and mustered out at New York city. To the battalion left in the field, there was assigned as Company D the company enlisted for the 2d Volunteer Engineers, on the 9th of October, 1863, and in March, 1864, another company recruited for the regiment joined it as Company E. In November, 1864, the reorganization of the regiment was completed by the addition of seven companies as F, G, H, I, K, L and M; Companies H, I and K were formed of recruits originally enlisted for the 50th Engineers; Company M was originally organized for the 175th Infantry, and Company L had originally been organized as a company of the 189th Infantry. The new companies were mustered in the United States service, D and E for three years; F and L for one and three years, and G, H, I, K and M for one year. 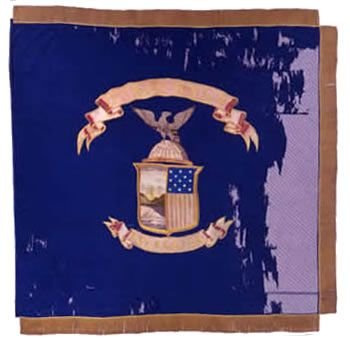 Mrs. S.D. Bradford presented this embroidered silk regimental color featuring the Arms of the State of New York to the 15th Regiment in June 1861.… 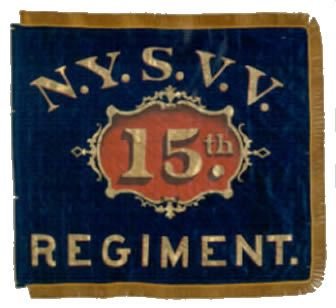 Organized in New York City, the 15th Regiment originally mustered in for two-year service as infantry and served as such until converted to engineers…

An appeal to the President, as the constitutional Commander in chief of the Army of the United States, by the recruits who volunteered to fill up the old 15 regiment of N.Y. volunteer engineers to be discharged according to their contract of enlistment, and according to General Order no. 108 of April 28, 1862. Washington: McGill & Witherow, printers, 1864. 59 p.

Reminisco, Don Pedro Quaerendo, pseud. Life in the Union army; or, notings and reminiscences of a two year volunteer. A rhythmical history of the Fifteenth N.Y. volunteer engineers, Colonel John McLeod Murphy, during its recent two years' campaign in and about Washington, and in the State of Virginia, by Don Pedro Quaerendo Reminisco, a private in the ranks. [New York]: H. Dexter, Hamilton & co., [1863]. 147 p.

Reminisco, Don Pedro Quaerendo, pseud. Life in the Union army; or, notings and reminiscences of a two year volunteer. A rhythmical history of the Fifteenth N.Y. volunteer engineers, Colonel John McLeod Murphy, during its recent two years' campaign in and about Washington, and in the State of Virginia, by Don Pedro Quaerendo Reminisco, a private in the ranks. New York: Sinclair Tousey, 1864. 147 p.

Roster of the 50th and 15th regiments, New York state volunteer engineers, Army of the Potomac. Compliments of the Secretary, Sam B. Williams. Rochester: Union and Advertising Press, 1894. 39 p.