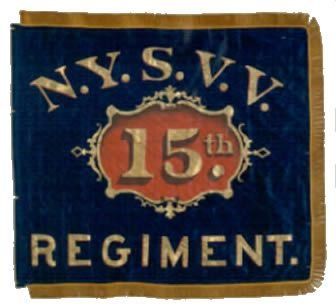 Organized in New York City, the 15th Regiment originally mustered in for two-year service as infantry and served as such until converted to engineers in October 1861. When their two year term expired, those entitled were discharged and the regiment continued in service as “Veteran Volunteers,” as indicated by the “N.Y.S.V.V.” along the top of this blue silk flank marker.