This regiment, Col. E. Elmer Ellsworth, was recruited and organized in New York city, accepted by the State April 20, 1861, and mustered in the service of the United States, at Washington, D. C, for two years, May 7, 1861. It was composed of members of the fire department of New York city, and left the State April 29, 1861. It served at Washington, D. C., from May 2, 1861; at and near Alexandria, Va., and in General Willcox's Brigade, from May 23, 1861; in the 2d Brigade, 2d Division, Army of Northeastern Virginia, from July 16, 1861; in New York harbor and Westchester county, from September, 1861; at Newport News, Va., from October, 1861; at New York city from May 7, 1862, where commanded by Lieut.-Col. Joseph E. MacFarland, it was honorably discharged and mustered out June 2, 1862.
The regiment (1st organization) lost by death, killed in action, 1 officer, 33 enlisted men; died of wounds received in action; 1 officer, 2 enlisted men; died of disease and other causes, 4 officers, 8 enlisted men; total, 6 officers, 43 enlisted men; aggregate, 49; of whom 3 enlisted men died in the hands of the enemy.

Colonel James C. Burke received authority, May 18, 1863, to reorganize the original 11th Infantry, as a three years' regiment. June 27, 1863, Col. Henry O'Brian succeeded Colonel Burke. In the draft riots in New York city in July 1863, col. Augustus B. Sage was appointed in his place. The efforts to recruit the regiment met with no success, and October 1, 1863, the reorganization was discontinued and the men, then enlisted, transferred to the 17th Veteran Infantry.

The regiment or rather parts of it took place in suppressing the draft riot in New York city, July, 1863, where 1 officer was killed.

The following is taken from The Union army: a history of military affairs in the loyal states, 1861-65 -- records of the regiments in the Union army -- cyclopedia of battles -- memoirs of commanders and soldiers. Madison, WI: Federal Pub. Co., 1908. volume II

Eleventh Infantry.—Cols., E. Elmer Ellsworth, Noah L. Farn-ham, Charles McK. Loeser; Lieut.-Cols., Noah L. Farnham, John A. Cregier, Spencer H. Stafford, Joseph E. McFarland; Majs., John A. Cregier, Charles McK. Loeser, Alexander McC. Stetson. This regiment, the 1st Fire Zouaves, was recruited in New York city and left for Washington, 1,200 strong, April 29, 1861. At Washington it was mustered into the U. S. service on May 7, for a two years' term and was quartered at the capitol until May 9, when it was sent to Camp Lincoln. On May 24, it was ordered to Camp Ellsworth, Alexandria, Va., where it became a part of Gen. Willcox's brigade. At the battle of Bull Run, July 21, it was with the 2nd brigade, 2nd division, Army of Northeastern Virginia, and engaged with severe loss. In September, it returned to New York for the purpose of reorganization; performed guard duty at Bedloe's island and returned to Fortress Monroe the same month, going into camp at Newport News. Efforts to reorganize the regiment proved futile and it returned to New York May 7, 1862, and was there mustered put on June 2. Other succeeding attempts to reorganize were likewise un-successful and the men enlisted for that purpose were assigned to the I7th N. Y. During its term of service the regiment suffered the loss of 51 members by death from wounds and 15 from accident or disease. 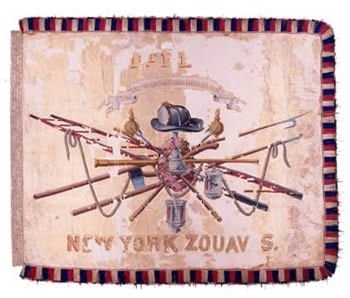 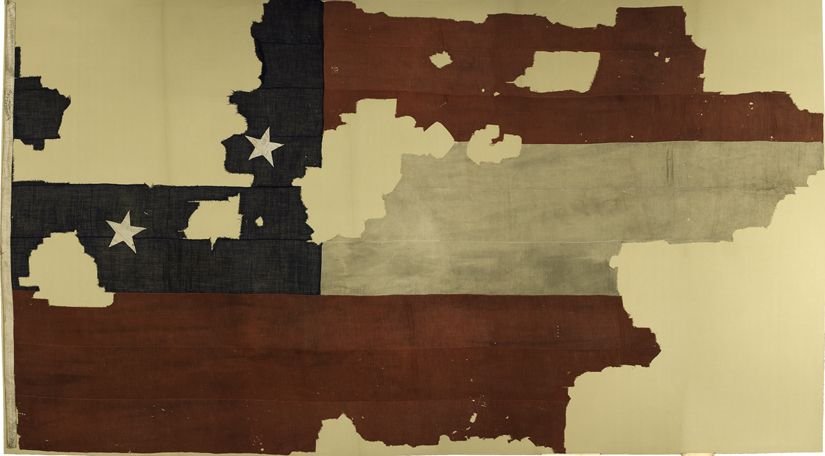 The Recruiting of Ellsworth Regiment 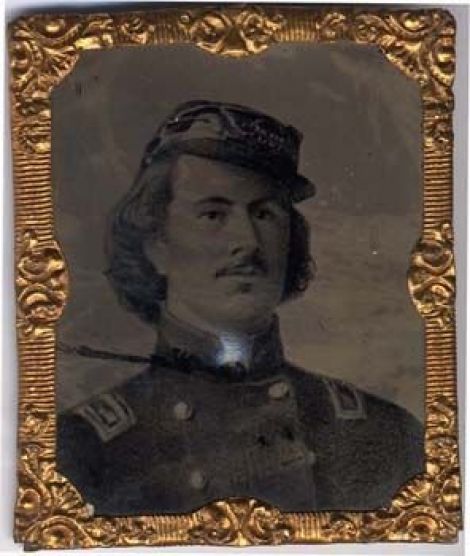 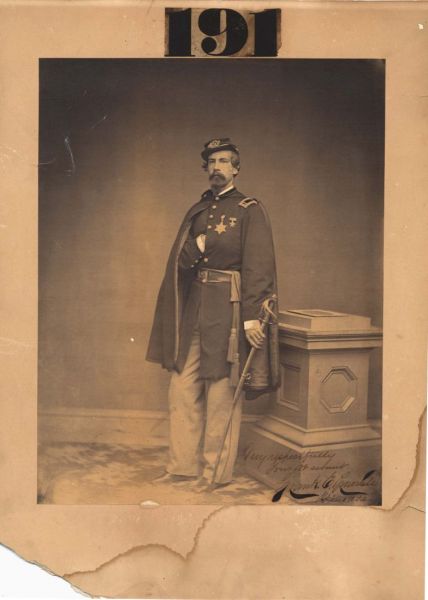 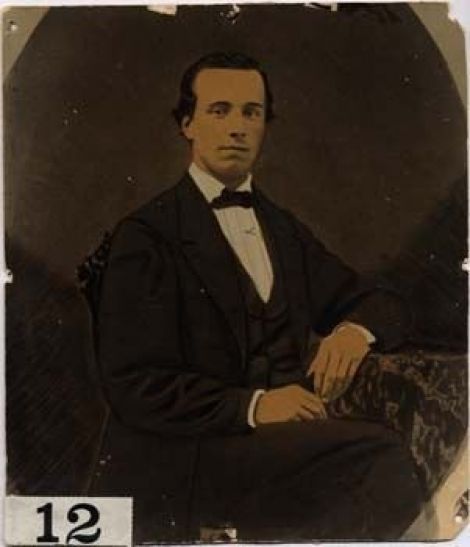 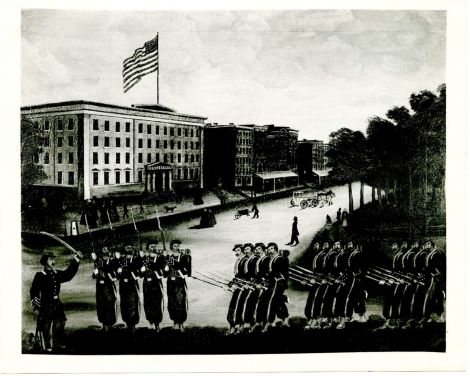 Belden, Mary J. Scrapbook, 1803-1861.
Abstract: Clippings of poems and articles, including description of the Fire Zouaves, quotation of their battle song and biographical statement on Elmer Ellsworth.
Note(s): Holograph; printed material./ The volume had previously been used as an account book in Saybrook, Conn.
Located at the Connecticut Historical Society.

De Marsan, Henry. In memory of Col. Ellsworth, of N.Y. Fire Zouaves, assassinated, May 24th, 1861.[New York?: H. De Marsan?, 1861.
Note(s): 4 stanzas; first line: Fall'n when his course had just begun./ Within illustrated border./ Cut of sword, books, and tablet at head of text./ N-YHS copy mounted, with other ballads, on a sheet from the William P. Wright scrapbooks./ N-YHS copy imperfect: closely trimmed to 15 x 8 cm., with loss of border and imprint.
Other Titles: Fall'n when his course had just begun
Located at the New York Historical Society.

Ellsworth, E E. Civil War Officer Images. 1861.
Artificial image collection for Elmer E. Ellsworth, a colonel with the 11th New York Infantry Regiment who became the first well-known casualty of the Civil War. The collection includes an enlarged copy print of a carte-de-visite and five copy photographs of two daguerreotypes. The oversized image shows Ellsworth posing in uniform and was taken from a cartes-de-visite released to honor him after his death. The copy photographs are of two daguerreotypes of Ellsworth posing in uniform and wearing a corps badge. The daguerreotypes were stolen in 1978 from the Wisconsin Veterans Museum while still residing in the Wisconsin State Capitol building. At some point, the images were also misidentified as being Edward A. Russell. Russell served as a private for five months in 1865 and would not have been wearing the officer's uniform and medals seen in the images. Museum records also show that Ellsworth had donated the images of Russell, indicating that the names had been accidentally transposed.
Located at Wisconsin Veterans Museum Library, Madison, WI

Ellsworth, E E, and Ephraim D. Ellsworth. Elmer Ephraim Ellsworth Collection. 1858. Archival material.
Collection of letters and documents related to Colonel Elmer Ephraim Ellsworth and his family of Mechanicville, New York. This collection also includes two letters of Ephraim D. Ellsworth, the father of Elmer Ellsworth dated, June 3, 1861 and December 15, 1884. Both of the letters indicate that he has received numerous requests from friends and others seeking to obtain an autograph signature of his son
Located at the New York State Library

Ellsworth Monument Association. Exercises connected with the unveiling of the Ellsworth monument at Mechanicville, May 27, 1874. Albany, N.Y. : J. Munsell, 1875.

Ellsworth's body lies moulding in the grave. Philadelphia: Johnson Song Publisher, 1861.
Note(s): Tune--"Brothers, will you meet me?"/ Cut of eagle with flags and bugle.
Responsibility: as sung by the Philadelphia Fire Zouaves.
Located at the Library of Virginia.

Ingraham, Charles Anson. Elmer E. Ellsworth and the Zouaves of '61. Chicago: Published for the Chicago Historical Society by the University of Chicago Press, 1925.

Life of James W. Jackson, the Alexandria hero, the slayer of Ellsworth, the first martyr in the cause of Southern independence, containing a full account of the circumstances of his heroic death, and the many remarkable incidents in his eventful life, constituting a true history more like romance than reality. Richmond, West & Johnston, 1862. 48 p.

Partridge, Horace. My Love He Is a Zou-Zu: Only 19 Years Old. Boston, Mass.: Sold at wholesale by Horace Partridge, importer, wholesale and retail dealer in fancy goods, toys, watches, jewelry, Yankee notions, &c. 27 Hanover Street, -- Boston, 1861.
Song in four stanzas with chorus; first line: My love he is a zou-zu, so gallant and bold./ Lyrics only./ Publisher's number at upper right: No. 768./ Imprint date suggested by textual reference to Lt. Col. Noah Lane Farnham of 7th and 11th New York Infantry Regiments, fatally wounded at the battle of Bull Run, 1861.

Portrait of the "southern Gentleman" Who Objected to Ellsworth's Zouaves Coming into Virginia, Because They Didn't Belong to the "first Families.". Philadelphia: S.C. Upham 310 Chestnut St, 1861.

Sage, Augustus B. 170th New York Infantry, Co. B.Papers (1844-1889).
These papers include personal letters and service records relating to Sage's military service during the Civil War. The letters concern routine matters such as camp life, drill, marching, and picket duty.
Sage served in the 11th, 170th and 178th regiments of New York State volunteers. He was an attorney and acted as an agent for several states in New York.
1 box (.25 cu. ft.).
Located at the New York State Library Manuscripts and Special Collections.

Sherman, Thomas W. Letters, May 24, 1861.
Description: 2 items.
Abstract: Letters, both to Captain Dahlgren at the Navy Yard and dated May 24, 1861, refer to care of the body of Col. Ellsworth and its removal to "the president's mansion." Ellsworth a native of New York had gone to Springfield, Ill. to study law and became involved in Lincoln's presidential campaign. When the war started, he returned to New York and helped form the New York Fire Zouaves. He was one of the first Union soldiers killed in the war.
Note(s): Bio/History: Graduate of the U.S. Military Academy in 1836 and appointed Brigadier General May 1861.
General Info: Preferred citation: Thomas W. Sherman Letters, Illinois State Historical Library.

*Items in the museum collection are in bold.