The following is taken from New York in the War of the Rebellion, 3rd ed. Frederick Phisterer. Albany: J. B. Lyon Company, 1912.
Colonel Elias Peissner received authority, June 26, 1862, to recruit this regiment; it was organized in New York City, and there mustered in the service of the United States for three years September 4 and 5, 1862. The companies were recruited principally: A; Halleck Guard, B, Q, D; Sigel Life Guard, Siegel Sharpshooters; E, F, G, I and K in New York City, and H at Hempstead. The men not mustered out with the regiment were transferred to the load Infantry June 7, 1865.
The regiment left the State September 6, 1862; served in the defenses of Washington, from September, 1862; in the 2d Brigade, 3d Division, 11th Corps, Army of the Potomac, from October, 1862; in the 2A Brigade, 2d Division, 20th Corps, Army of the Cumberland, from April, 1864; and was honorably discharged and mustered out, under Col. John T. Lockman, June 7, 1865, near Bladensburg, Md.
During its service the regiment lost by death, killed in action, 4 officers, 48 enlisted men; of wounds received in action, 2 officers, 23 enlisted men; of disease and other causes, 2 officers, 92 enlisted men; total, 8 officers, 163 enlisted men; aggregate, 171; of whom 14 enlisted men died in the hands of the enemy.

The following is taken from The Union army: a history of military affairs in the loyal states, 1861-65 -- records of the regiments in the Union army -- cyclopedia of battles -- memoirs of commanders and soldiers. Madison, WI: Federal Pub. Co., 1908. volume II.
One Hundred and! Nineteenth Infantry.—Cols., Elias Peissner, John T. Lockman; Lieut-Cols., John T. Lockman, Edward F. Lloyd, Isaac P. Lockman; Majs., Harvey Baldwin, Jr., Benjamin A. Willis, Isaac P. Lockman, Charles F. Lewis, Chester H. Southworth. This regiment was recruited and organized at New York city in the summer of 1862, and was mustered into the U. S. service on Sept. 4-5, for three years. On the 6th the regiment left for Washington, where it was attached to the 2nd brigade, 3d (Schurz') division, nth corps (Howard), and went into winter quarters at Stafford, Va. At the battle of Chancellorsville, Howard's corps was surprised and suffered severely, the 119th losing 21 killed, 67-wounded and 32 missing, Col. Peissner being killed while rallying his men. The regiment was commanded at Gettysburg by Col. Lockman, and was heavily engaged on the first two days of the battle, losing 140 in killed, wounded and missing. After returning-with the army to Virginia, it was ordered with its corps on Sept. 24, to Tennessee. It was present but not active at the midnight battle of Wauhatchie, fought valiantly at Missionary ridge, and was then ordered with the corps to the relief of Knoxville, en-during severe hardships and privations during the campaign. In April, 1864, when the 11th corps was broken up, the regiment was assigned to the 2nd brigade, 2nd division, of the newly formed 20th corps, commanded by Gen. Hooker, the veteran Gen. Geary being in command of the division. It moved on the Atlanta campaign and took part in numerous battles in the next four months, including Rocky Face ridge, Resaca, where the brave Lieut.-Col. Lloyd was killed, New Hope Church, Kennesaw mountain, Peachtree-creek, and the siege of Atlanta. After the fall of Atlanta, it remained with the corps to hold the city, while the rest of the army went in pursuit of Hood. On Nov. 15, the regiment moved with Sherman's army on the grand march through Georgia to the sea and took part in the siege of Savannah, Geary's division being the first to enter the city upon Hardee's evacuation. Early in the year 1865, it moved on the campaign of the Carolinas, fighting at Averasboro, Bentonville, Raleigh and Bennett's house, but sustaining a loss of only 4 missing. After Gen. Johnston's surrender, it marched on to Washington with the 20th corps, where it participated in the grand review, and was mustered out at Bladenburg, Md., June 7, 1865, commanded by Col. Lockman. The total enrollment of the regiment was 69 officers, 981 men. It lost by death during service, 6 officers and 71 men, killed and mortally wounded; 2 officers and 92 men by disease and other causes, a total of 171. 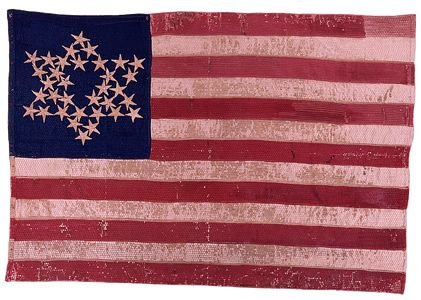 Made by women from Hempstead, Long Island and reportedly received by Company H in the fall of 1862 while on duty near Washington, D.C., this silk… 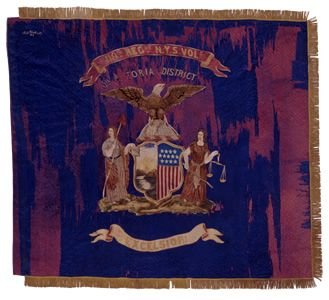 Hart, Larry. Through the darkest hour : a romantic story of a Union College man's adventures and tribulations during the Civil War, 1862-1865. Scotia, NY: Old Dorp Books, 1990.