The following is taken from New York in the War of the Rebellion, 3rd ed. Frederick Phisterer. Albany: J. B. Lyon Company, 1912.
Colonel Thomas B. Van Buren was authorized November 1, 1861, to recruit a regiment of infantry, known then as the Van Buren Light Infantry. The Von Beck Rifles, Col. R. H. Shannon, and part of the McClellan Infantry, Col. S. Levy, were, January 27, 1862, consolidated with the Van Buren Light Infantry, and the organization of the regiment was completed March 5, 1862, by the assignment of three additional companies, one of which was Captain Avery's Company A, late of the 12th Militia, but at this time unattached; the 78th Cameron Rifle Highlanders were consolidated into two companies and formed the other two companies, namely 1, K, of this regiment, April 3, 1862. The regiment received its numerical designation March 5, 1862, and the men were mustered in the service of the United States for three years between September 9, 1861, and April 5, 1862. July 12, 1864, the officers and enlisted men of the 78th Volunteers were transferred to it, company to corresponding company. At the expiration of its term of enlistment the men entitled thereto were discharged, and the regiment continued in service. June 1, 1865, it received by transfer the men of the 119th and 154th, June 3d those of the 137th and 149th, and June 5, 1865, those of the I34th and 184th Infantry, not mustered out with their respective regiments.
The companies were recruited principally: A, Company A, 12th Militia, Avery Rifles, Independence Guard, in New York city; B, Von Beck Rifles, at Rondout; C at Cold Spring Harbor and New York city; D at Lima, Avoca and New York city; E, Calcium Light Sharpshooters, at New York city; F, "McClellan Light Infantry, at Brooklyn and New York city; G. Von Beck Rifles, at Rondout; H, Von Beck Rifles, at New York city; 1, 78th Cameron Rifle Highlanders, at Sharon Springs, and K, Cameron Rifle Highlanders, at New York city, Ogdensburg and Jersey City.
The regiment, eight companies, left the State March 10, 1862; Companies I and K left April 7, 1862; it served at and near Washington, D. C., in Doubleday's Brigade, Wadsworth's Division, 1st Corps, Army of the Potomac, from March, 1862; in the 1st, Cooper's, Brigade, Sigel's Division, Department Shenandoah, from May, 1862; in 2d Brigade, 2d Division, 2d Corps, Army of Virginia, from June 26, 1862; in same brigade and division, I2th Corps, Army of the Potomac, from September 12, 1862; in 3d Brigade, same division and corps from October 27. 1862: in same brigade and division, 20th Corps, Army of the Cumberland, from April, 1864; in 1st Brigade, Bartlett's Division, 22d Corps, from June, 1865; and it was honorably discharged and mustered out, under Col. Harvey S. Chatfield, July 21, 1865, at Alexandria, Va.
During its service the regiment lost by death, killed in action, 6 officers, 45 enlisted men; of wounds received in action, 1 officer, 22 enlisted men; of disease and other causes, 1 officer, 82 enlisted men; total, 8 officers, 149 enlisted men; aggregate, 157; of whom 4 enlisted men died in the hands of the enemy.

The following is taken from The Union army: a history of military affairs in the loyal states, 1861-65 -- records of the regiments in the Union army -- cyclopedia of battles -- memoirs of commanders and soldiers. Madison, WI: Federal Pub. Co., 1908. volume II.
One Hundred and Second Infantry.—Cols., Thomas B. Van Buren, James C. Lane, Herbert Hammerstien, Harvey S. Chatfield; Lieut-Cols., William B. Hayward, James C. Lane, Harvey S. Chat-field, Oscar J. Spaulding; Majs., James C. Lane, F. Eugene Trotter, Gilbert M. Elliott, Lewis R.. Stegman, Oscar J. Spaulding, Reuben H. Wilber. This regiment, known as the Van Buren light in-fantry, was principally recruited at New York city, and was formed by the consolidation of the Von Beck rifles under Col. R. H. Shannon, and part of the McClellan infantry under Col. S. Levy, with Col. Van Buren's command. The organization was completed later by the addition of two companies from the 78th Cameron Highlanders and Co. A, 12th militia, and was mustered into the U, S. service from Nov., 1861, to April, 1862. In July, 1864, its ranks were filled by the transfer of the officers and men of the 78th N. Y. infantry. On the expiration of its term of service the original members (except veterans) were mustered out, and the regiment, composed of veterans and recruits continued in service. Early in June, 1865, it received by transfer the remaining men of the 119th, 154th, 137th, 149th, 134th, and 184th N. Y. Vols. The regiment, eight companies, left the state on March 10, 1862, followed by Cos. I and K on April 7. Assigned to the 2nd brigade, 2nd division, 2nd corps, Army of Virginia, it fought its first severe engagement at Cedar mountain, where its loss was 115 killed, wounded and missing. The regiment then moved with its corps to the support of Pope, fought at the second battle of Bull Run, and went into position at Chantilly, but was not engaged. In the same brigade and division, 12th corps, it was actively engaged at Antietam, losing 37 killed, wounded and missing, and. was then successively engaged in the minor actions at Lovettsville, Ripon, Hillsboro, Winchester, Wolf Run shoal, and Fairfax Station, going into winter quarters at Stafford Court House. At the battle of Chancellors-ville the l02nd, which fought in Geary's division of the 12th corps, lost 90 killed, wounded and missing. It was heavily engaged with the "White Star" division at Gettysburg, where its total loss was 29. It followed with its corps in pursuit of Lee's fleeing army, being engaged at Ellis' ford and Stevensburg, and in the latter part of September moved with the corps to Tennessee to reinforce Gen. Rosecrans. It engaged in the midnight battle of Wauhatchie; then started on the Chattanooga and Rossville campaign, fighting the famous "Battle above the clouds" on Lookout mountain, where the division led the advance; then fought at Missionary ridge and Ring-gold gap, its loss in the campaign being 14 killed, wounded and missing. In the same brigade and division, 20th corps, the 102nd was with Gen. Sherman all through his Atlanta campaign, fighting at. Villariow, Mill Creek gap, Resaca,. Calhoun, Cassville, Dallas, Acworth, Kennesaw mountain, Chattahoochee river, Peachtree creek, where its losses amounted to 53 in killed, wounded and missing, and at Bald hill It moved in November with Sherman's army on the march to the sea, shared in the siege of Savannah, its active service closing with the campaign in the Carolinas, during which it was engaged at. Wadesboro, Averasboro, Bentonville, Goldsboro, Raleigh; and Bennett's house, losing 18 killed, wounded and missing during this final campaign. It was mustered out under Col. Chatfield, July 21, 1865, at Alexandria, Va. During its long and honorable service the 102nd buried its dead in seven states, and participated in over 40 battles and minor engagements. It participated in many a famous charge, one of the most gallant being at Lookout mountain, where the regiment, as part of. Ireland's brigade, struck the enemy on the flank and drove him in confusion from the field. It belonged to the gallant White Star division, commanded by Gen. Geary, who complimented the regiment as follows: < "It may safely be asserted that no organization in the army has a prouder record, or has passed through more arduous, varied and bloody campaigns." The loss of the regiment during service was 7 officers and 67 men killed and mortally wounded; 82 men died of disease, accident, etc., a total of 7 officers and 149 enlisted men. The gallant Maj. Elliott was killed in action at Lookout mountain. 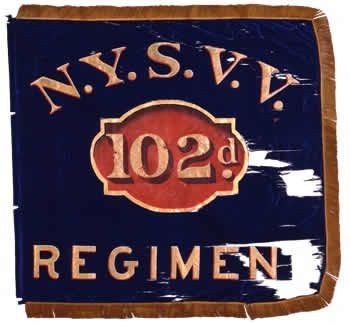 The 102nd Regiment NY Volunteer Infantry mustered into service for three years between September 1861 and April 1862. When their three year term…

Benedict, Lewis A.  Papers (1859-1868).
1 box.
Collection comprised of official correspondence and documents related mostly to the Battle of Williamsburg, 1862. Also includes convoy orders of General Nathanial Banks river expedition and a map of the Battle of Pleasant Hill, 1862.
Located at the Library of Congress.

Bown family.  Bown family record book, ca. 1831.-1955.
1 v. (ca. 250 p.) ; 38 cm.
Volume containing manuscript business accounts kept by William T. Bown in England, ca. Jan-Jul, 1832; holograph copies of letters written by William T. Bown while living in Pittsburgh, most to family members, ca. 1831-1839; a holograph account written by Charles T. Bown, describing his service in the Civil War, written or copied in 1869; newspaper clippings, pasted over several pages of William T. Bown's accounts and laid in, most concerning American and European history, collected by Charles T. Bown, 1867-ca. 1881; and a few newspaper clippings collected by C. Elmer Bown, with a few holograph notes written by him, 1955. Letters written by William T. Bown describe his passage to the United States on the ship Cosmo, illness on board ship and the deaths of two of his children; his impressions of Pittsburgh, its economy, and business prospects for emigrants; his bakery business; and family news. Laid in the volume are a sheet of accounts and a sheet showing an inscription for a tombstone for his wife, Ann Alizabeth Bown. Charles T. Bown's account of his Civil War service is dated at Pittsburgh, 1869. He describes in detail his enlistment in the Pennsylvania Reserve Corps; experiences during the Peninsular Campaign, his wounding at Gaines Mill during the Seven Days Battles, and his convalescence; experiences with the 102nd New York Infantry in Tennessee; Sherman's Atlanta and Carolina campaign, the Battle of Resaca, and a second wound; and rejoining his Regiment in North Carolina and mustering out in July, 1865. Most of the account is in the form of diary entries; Bown also briefly summarizes his early life and his activities after the War, 1865-1868. Accompanied by a small amount of letters and manuscript notes relating to research by Robert E. Gallagher on Walter T. Bown, his letters contained in the volume, and circumstances of his emigration. Letters were received by Gallagher in response to his requests for information from archives and other sources, most relating to the Bown family and the ship Cosmo.
Located at Yale University.

Miscellaneous documents relating to the formation of the Calcium Light Regiment.
Located in the vertical files.