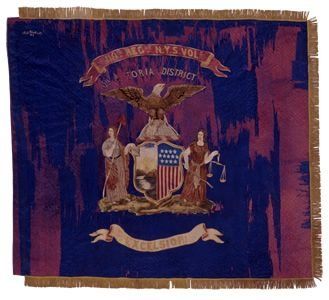 Late in the afternoon of September 5, 1862, the 119th New York Volunteers assembled outside regimental surgeon Dr. Charles Brueninghausen’s residence in New York City and received a stand of colors including the Regimental Color seen here. Made by Ball, Black & Company of New York City, the embroidered color features the State Arms and the inscription, “5th SENATORIAL DISTRIT,” for the unit’s political home territory. This flag accompanied the unit to Gettysburg, Pennsylvania, where, on July 1, 1863, the 119th New York Volunteers and other regiments from Brigadier General Wlademir Krzyzanowski’s brigade attempted to hold off the Confederate advance near Blocher’s Knoll. Outnumbered, the 119th New York Volunteers reportedly lost 100 men in 15 minutes, including two color bearers killed in action. The 13th Georgia Infantry captured the Regimental Color . The 13th Georgia retained the flag until the late 19th century when surviving Confederate veterans offered the flag to Benjamin Willis, a veteran who served with the 119th New York Volunteers at Gettysburg. Willis received the flag from the Georgia veterans, and in 1967, Willis’s daughter, Porta Willis Fitzgerald, turned the flag over to state authorities. Shortly after this flag joined the state’s collection, state officials sent the flag to Fort Montgomery, New York, for restoration. The restorer removed the fringe, machine-stitched the flag between two layers of nylon net, and then reattached the fringe. In addition, the restorer applied paint to the faded embroidered female figures in the Arms of the State of New York and added colored fabric behind the flag to mask the losses. The dye of this fabric was not color fast and shifted over time to a purple color. Much of the flag’s original blue silk remains and is easily discernible from the now-purple compensation fabric. Although not a recommended treatment by today’s standards because the stitching creates too many holes in the flag, the netting applied in 1967 did prevent additional losses. Also, the paint applied in 1967 to the female figures obscures the original embroidery yarns and is not an acceptable treatment today for dye loss. In early 2013, State Parks textile conservators gently vacuumed the flag with low suction to remove harmful particulate soils, and they humidified the flag with a controlled amount of humidity to reduce rippling. The conservators did not remove the netting treatment and the now-purple fabric bceause the many rows of stitching used to apply the net created additional breaks and weakened the original silk fabric.