July 26, 1861, Col. Spencer W. Cone received authority from the War Department to recruit a regiment of infantry. This regiment received its numerical designation and was organized by the State authorities October 25, 1861, at New York city, by the consolidation of the Astor Regiment or Rifles, Col. Charles Rosefield, with the Clinton Guards, Colonel Cone; Companies C, D, E, F, G, H, I, K and Captain Deming's Company of the Clinton Guards formed Companies A, B, C, D, E, F, G, H and I of the 61st Regiment; Company F of the Astor Regiment formed Company K, and Company C of the Astor Regiment was disbanded. The regiment was mustered in the service of the United States for three years in September, October and November, 1861, and Spencer W. Cone appointed its Colonel. In September, 1862, a new company joined, taking the place of Company I, consolidated with K, in July, 1862. At the expiration of its term of service the men entitled thereto were discharged and the regiment retained in service. December 4, 1864, Companies G and K were consolidated with the other companies, and December 20, 1864, the enlisted men of the 57th Infantry, not mustered out with their regiment, were transferred to this, forming new Companies G and K.
Company C was almost entirely composed of students from Madison University, Hamilton, the other companies were recruited principally in New York City; the second Company I was recruited at Albany and vicinity.
The regiment left the State November 9, 1861; served at Washington, D. C., from November 10, 1861; in Howard's Brigade, Sumner's Division, Army of the Potomac, from November 27 1861; in Howard's, 1st, Brigade, Richardson's, 1st, Division, 2d Corps, Army of the Potomac, from March 13, 1862-; in 3d Brigade, 1st Division, 2d Corps, from July, 1862- in 1st Brigade 1st Division, 2d Corps, from September, 1862; in 2d Brigade, 1st Division 2d Corps, from October, 1862; in 1st Brigade, 1st Division, 2d Corps, from November, 1862; and, commanded by Col. Geo. W. Scott, it was mustered out and honorably discharged July 14, 1865, at Alexandria, Va.
During its service the regiment lost by death, killed in action, 11 officers, 113 enlisted men of wounds received in action, 5 officers, 67 enlisted men; of disease and other causes, 2 officers 134 enlisted men; total, 18 officers, 314 enlisted men; aggregate, 332; of whom 46 enlisted men died in the hands of the enemy.

Sixty-first Infantry.—Cols., Spencer W. Cone, Francis C. Barlow, Nelson A. Miles, K. Oscar Broady, George W. Scott; Lieut.-Cols., Francis C. Barlow, William C. Massett, Nelson A. Miles, K-Oscar Broady, George W. Scott, Richard A. Brown; Majs., William C. Massett, Arthur. L. Brooks, Edward Z. Lawrence, William H. Spencer, George W. Scott, Henry B. Todd, Willard Keech, Richard A. Brown, George W. Schaffer. This regiment, known as the Clinton Guards, contained one company from Madison university, Ham-ilton, one company from the vicinity of Albany, and the remainder from New York city. It was mustered into the U. S. service at New York city during Sept., Oct. and Nov., 1861, for three years, and left for Washington on Nov. 9. It was stationed for a short time at Washington, but moved on Nov. 28, with Howard's brigade, Sumner's division, to Manassas and with the same brigade became a part of the 1st division, 2nd corps, Army of the Potomac, in March, 1862. It moved to the Peninsula early in the spring, took part in the operations of the siege of Yorktown and was first closely engaged in the battle of Fair Oaks, in which 106 were killed or wounded and 4 reported missing, out of 432 who went into action. There Lieut.-Col. Massett and many other gallant men lost their lives. The loss in the Seven Days' battles was still greater, and the ranks that gathered at Harrison's landing after the battle of Malvern hill were sadly depleted. In July, the regiment was assigned to the 3d brigade of its old division, in September to the 1st brigade of the same division, in October to the 2nd brigade, and in November again to the 1st brigade. In Sept., 1862, Co. I from Albany joined the regiment and took the place of a company con-solidated with the others. At Antietam the regiment was in the thick of the fight, and at Fredericksburg it served in Han-cock's division in the charge on Marye's heights and lost 36 in killed, wounded and missing. At Chancellorsville in May, 1863,. the troops under Col. Miles made a gallant defense which won them high praise, and at Gettysburg the loss was once more severe. There was little rest for the worn regiment during the autumn. At Auburn, Bristoe Station, Rappahannock Station and in the Mine Run campaign, it was active, and it was mid-winter when it finally established permanent quarters near Brandy Station. In December and January a large number of men reenlisted and received veteran furlough. The regiment was reunited in the spring of 1864 and served with honor through the severe fighting which led up to Cold Harbor and Petersburg, suffering most severely in the bloody angle at Spottsylvania. It joined in the first assault on Petersburg, June 15; was engaged at Deep Bottom, Strawberry Plains, Reams' station and Hatcher's run, and on Dec. 20, received the veterans and recruits of the 57th N. Y. infantry. It was present at the fall of Petersburg, joined in the pursuit to Appomattox, and was engaged at Sailor's creek and Farmville. On July 14, 1865,. the 61st was mustered out at Alexandria, having lost 193 by death from wounds and 123 from other causes, of whom 46 died in prison. The total enrollment of the command was 1,526 members. Its record is a long and glorious one and it bravely earned its right to rank among the most gallant organizations of the Union army. 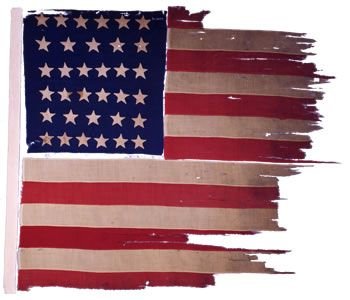 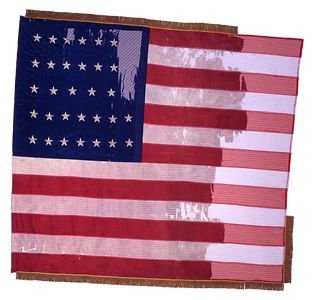 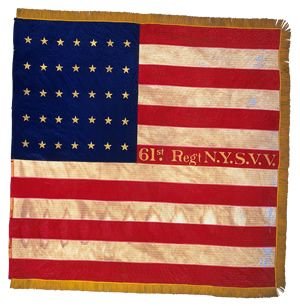 This national color, pieced together in red, white, and blue silk with 1/8-inch flat-felled seams and two rows of machine stitching, features 35… 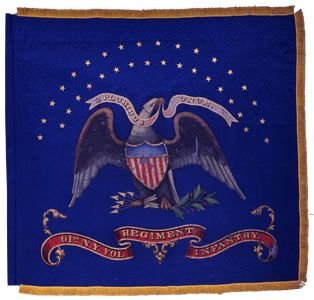 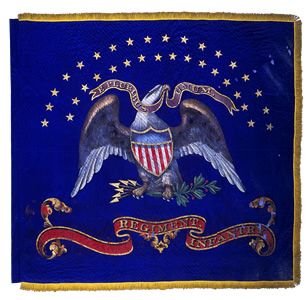 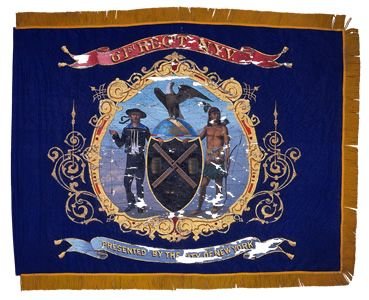 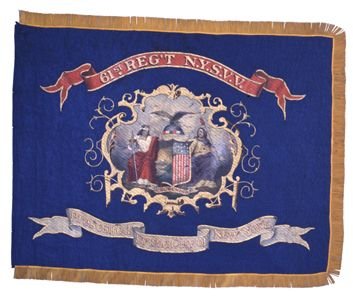 The 61st New York Volunteers mustered into service September-October 1861 for three years. When their three year term expired, those entitled were… 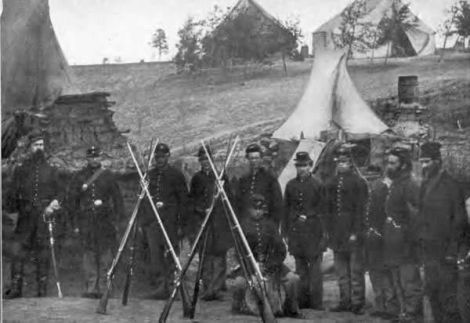 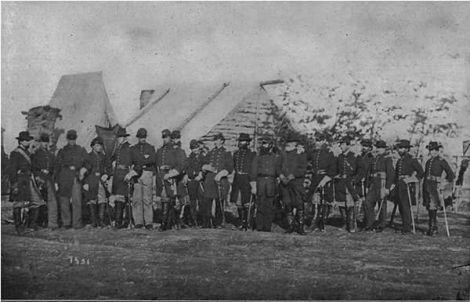 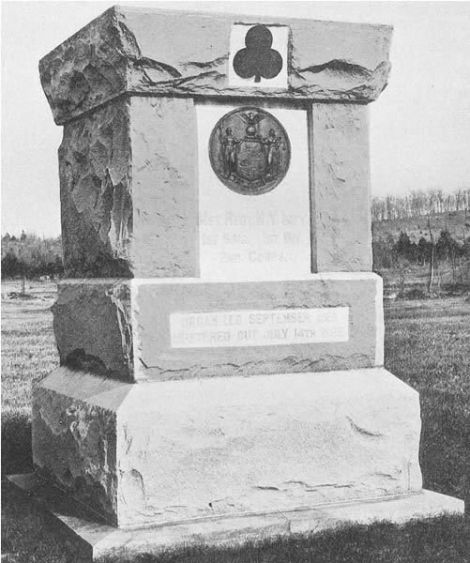 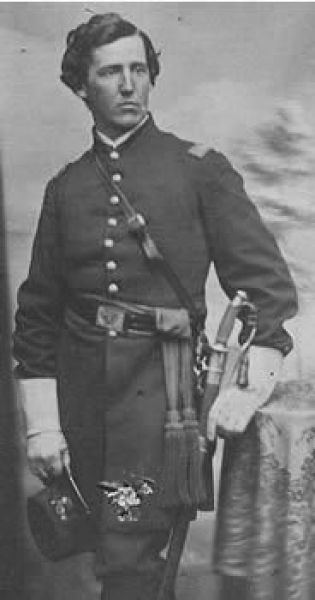 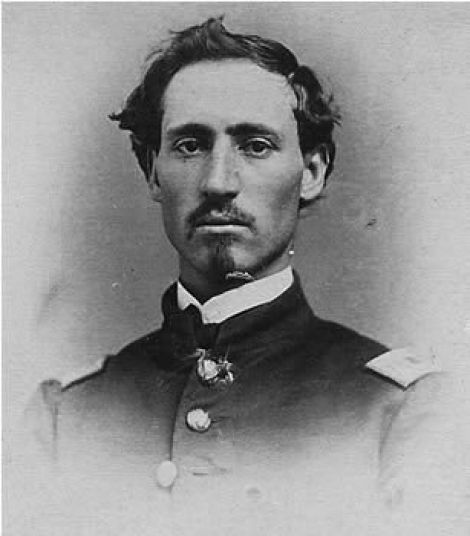 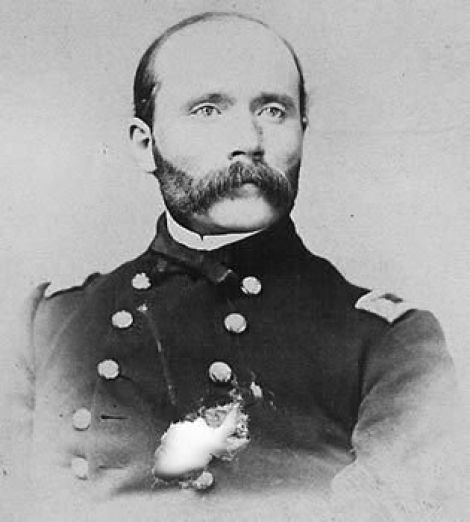 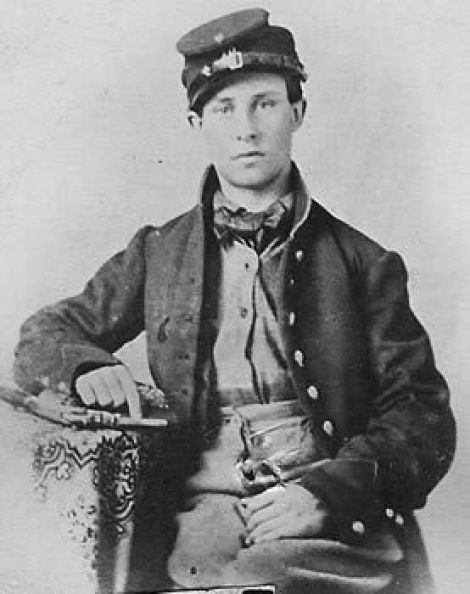 61st New York Infantry records, 1861-1864.
Description: 0.4 linear feet (1 box)
Abstract: Records, 1861-1864. They consist mainly of muster rolls, but include a few other miscellaneous papers: vouchers, certificates, receipts, a note of clothing issued to a patient in Chester U.S. Army General Hospital, and some correspondence, including one letter about a prisoner of war's pay.
Notes: Bio/History: New York Civil War regiment, also known as "Clinton Guard"; active mainly in Virginia, they also fought at Gettysburg.
General Info: Access: open to qualified researchers at the New-York Historical Society./ This collection is owned by the New-York Historical Society.

Barlow, Francis C. Francis C. Barlow letters, 1861-1865.
Description: 1 box.
Abstract: Letters sent by Francis C. Barlow to his mother Almira in Brookline, Mass. and brothers, 1861-64, while serving with the 12th New York State Militia and the 61st New York Volunteer Infantry. Barlow describes various campaigns including Antietam, Maryland, where he received a groin wound; Chancellorsville, Virginia; Gettysburg, Pennsylvania where he was left for dead on the battlefield; the siege of Petersburg, Virginia, and other campaigns; and warns his mother not to believe rumors of his death. Also includes letters received by Barlow from other army personnel regarding promotions and commands, 1865; and typewritten transcriptions of the letters.
Located at the Massachusetts Historical Society.

Bullock, Miles Wayne. Family papers, 1799,1911.
Description: .5 cubic ft. (in 1 box)
Abstract: Family papers, 1799-1911 and undated, include family correspondence relating to family and life in Sherburne (N.Y.) and Marion (Mich.). The Civil War correspondence of Bullock and his comrades of the New York Infantry 61st Regiment Company G note the feelings of soldiers and civilians about the war, superior officers, the armistice, and describe Fredericksburg (Va.), Gettysburg (Pa.), Harpers Ferry (W. Va.), and Sharpsburg (Md.). Also included are family obituaries, photographs, an autobiographical sketch of Bullock, and an account book, 1813-1820, of a carding mill, possibly owned by S. Bullock of New Hartford (Ct.).
Notes: Bio/History: Bullock was a Civil War veteran and resident of Sherburne (N.Y.). He married Cordelia Sexton in 1866 and moved to Marion (Mich.). They had two children. He died of typhoid in Sherburne on Sept. 12, 1914.
Located the Clarke Historical Library Civil War collection of personal papers. (Central Michigan University)

Cole, Jacob Henry. Under five commanders : or, A boy's experience with the Army of the Potomac. Paterson, N.J. News Print. Co. 1906.

Fuller, Charles Augustus. Personal recollections of the war of 1861, as Private, Sergeant and Lieutenant in the Sixty-first regiment, New York volunteer infantry, by Charles A. Fuller. Prepared from data found in letters, written at the time from the field to the people at home. Sherburne: News print, house, 1906.

Jones, Walter Franklin. Walter Franklin Jones papers, ca. 1860-1862.
Abstract:    Jones served with the 61st New York Infantry Regiment until his discharge on April 29th, 1862, and later saw service as a Lieutenant in Co. A of the 14th New York Cavalry, remaining with that unit until it was consolidated near the end of the Civil War. Six of Jones' letters were written home from Camp California, near Faifax Court House, Va., in the first months of 1862, when the 61st Regiment was attached to the slow moving Army of the Potomac.
Located at the Manuscripts Division, William L. Clements Library, University of Michigan.

Robertson, Robert Stoddart. From the Wilderness to Spottsylvania, a paper read before the Ohio commandery of the Military order of the loyal legion of the United States, by Robert Stoddart Robertson, late 1st Lieut. 93rd New York. Cincinnati: Henry C. Sherick, 1884.

Zellow, Frederick. Papers (1879-1880)
Collection call Number 13453
Abstract: A collection of materials related to Zellow’s application for a military pension and other veterans’ benefits, which includes his enrollment and discharge certificates.
Located at the New York State Library Manuscripts and Special Collections.