This regiment was organized in New York city October 11, 1861, by the consolidation of the Scott and the Union Rifles with the Shepard Rifles. The New York Rifles, Col. Chas. W. LeGendre, had already been consolidated with the Shepard Rifles, Colonel Ferrero, and part of the Empire Zouaves with the Union Rifles, Col. Anton Martin Lichtercost. Other incomplete organizations were added, Henry Z. Drew's company of Mechanic Rifles becoming part of Company C; Company A, U. S. Voltigeurs or Rangers, Col. Albert C. Ramsay, Company D; and a portion of Col. L. Ayer's Yates Rifles part of other companies of the regiment. The Scott Rifles were recruited by Col. W. R. McDonald, under authority from the War Department, dated July 22, 1861. Col. Edward Ferrero was placed in command of the regiment, which, recruited in New York city, was mustered in the service of the United States for three years between July 27 and October 23, 1861. At the expiration of its term of service, the men entitled thereto were mustered out and the regiment retained in service. June 3, 1865, the enlisted men of the 109th Infantry, not discharged with their regiment, were transferred to it.
The regiment left the State October 29, 1861; served in the 2d Brigade, 2d Division, Department of North Carolina, from November, 1861; in the same brigade and division, 9th Corps, from June, 1862; in the 1st Division, 23d Corps, from September, 1863; in the District of Kentucky, Department of Ohio, from January, 1864; in the 2d Division, 9th Corps, from February, 1864; in the 2d Brigade, 2d Division, 9th Corps, from March, 1864; in the 1st Brigade, 2d Division, 9th Corps, from April, 1864; as Engineers of the Division, from May 26, 1864; in the 1st Brigade, 2d Division, 9th Corps, Army of the Potomac, from July 2, 1864; and it was honorably discharged and mustered out, commanded by Col. John G. Wright, July 25, 1865, at Alexandria, Va.
During its service the regiment lost by death, killed in action, 7 officers, 130 enlisted men; of wounds received in action, 2 officers, 63 enlisted men; of disease and other causes, 2 officers, 181 enlisted men; total, 11 officers, 374 enlisted men; aggregate, 385; of whom 1 officer, 72 enlisted men died in the hands of the enemy.

Fifty-first Infantry.—Cols., Edward Ferrero, Robert B. Potter, Charles W. LeGendre, Gilbert McKibben, John G. Wright; Lieut.-Cols., Robert B. Potter, Charles W. LeGendre, R. Charlton Mitchell, Samuel H. Benjamin, John G. Wright, Thomas B. Marsh; Majs., Robert B. Potter, Charles W. LeGendre, R. Charlton Mitchell, John G. Wright, Thomas B. Marsh, George W. Whitman. The 51st regiment contained six companies of the Shepard Rifles, two companies of the Scott Rifles and two companies of the Union Rifles and was organized in New York city, where it was mustered into the service of the United States July 27 to Oct. 23, 1861, for a three years' term. It left the state for Washington on Oct. 31, with 850 members, was assigned to the 2nd brigade, 2nd division, Gen. Burnside's North Carolina expedition, and embarked at Annapolis Jan. 6, 1862, for Roanoke island. The first active service of the regiment was at Roanoke island, where it fought with courage and steadiness. The battle of New Berne followed in March, in which the 51st suffered the most severely of any regiment engaged—71 men being killed or wounded. Until July 6, 1862, the command was quartered at New Berne, when it was ordered to return to Virginia, and upon arriving at Newport News was assigned to the 2nd brigade, 2nd division, 9th corps. It participated in Gen. Pope's campaign in August and September; was present at Kelly's ford; was closely engaged at Sulphur springs, the second Bull Run and Chantilly, with a loss in the campaign of 89 in killed, wounded and missing. The regiment was withdrawn to Washington, but soon took the field for the Maryland campaign; was active at South mountain and Antietam, losing in the latter battle 87 killed or wounded in a most brilliant charge across the stone bridge, which alone would have made the fighting qualities of the regiment renowned. In November, the 51st was engaged at Jefferson, Va., and Warrenton springs and late in the month moved to Fredericksburg, where it took part in the battle in December with a loss of 73 members. After sharing the hardships of Burnside's "Mud March," the regiment established winter quarters near White Oak Church, but was soon transferred to the Department of the West and with the 9th corps arrived at Vicksburg in June. It participated in the siege operations and the pursuit to Jackson, Miss.; then proceeded to Tennessee, where it participated in the battle of Blue springs; was active at Campbell's station, and assisted in the defense of Knoxville during the siege. In Dec., 1863, a large proportion of the command reenlisted and received veteran furlough, rejoining the regiment with new recruits at Knoxville. In Feb., 1864, the 9th corps was ordered to join the Army of the Potomac at Brandy Station, where it arrived May 1. In the Wilderness campaign the loss of the regiment was 79 during the first two days, including Col. LeGendre, who was wounded in the eye. The command distinguished itself for heroism in the terrible month which followed; then proceeded to Petersburg; was active at the mine explosion, the Weldon railroad, Poplar Spring Church, Hatcher's run, at Fort Stedman, and in the final assault on April 2, 1865. The original members not reenlisted were mustered out during the autumn of 1864 and the veterans at Alexandria, July 25, 1865. The total enrollment of the regiment was 3,050 and it received in June, 1865, the veterans and recruits of the l09th N. Y. Its total loss in all its engagements was 925, while 202 died from wounds and 385 from accident, disease or imprisonment. At Peebles' farm, Va., the regiment was surrounded and 332 members captured. Col. Fox in "Regimental Losses" says of the 51st, "Few regiments saw a more active service and none left a more honorable record." 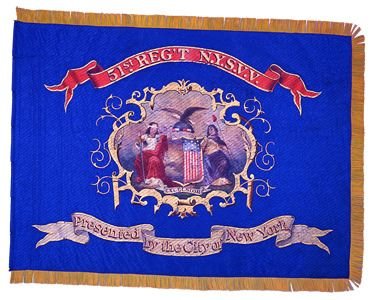 The 51st Regiment, or “Shepard Rifles,” mustered into service for three years by 23 October 1861. When their three year term expired, those entitled… 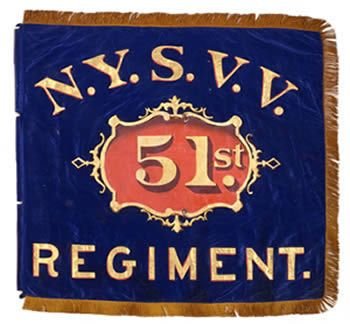 The 51st Regiment , or “Shepard Rifles,” mustered into service for three years by 23 October 1861. When their three year term expired, those entitled… 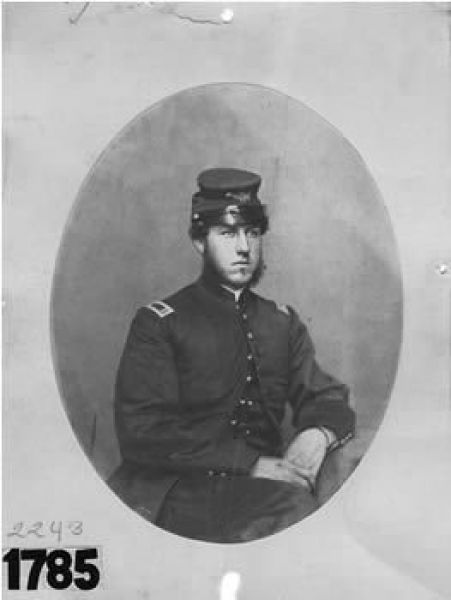 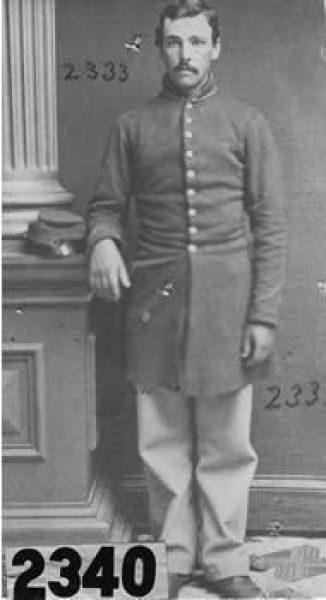 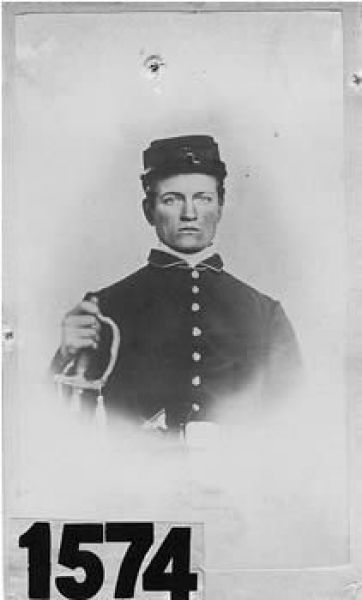 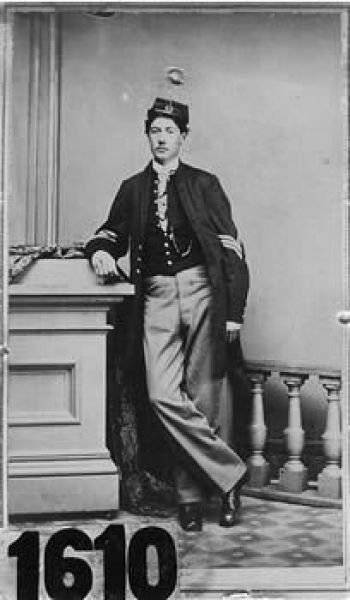 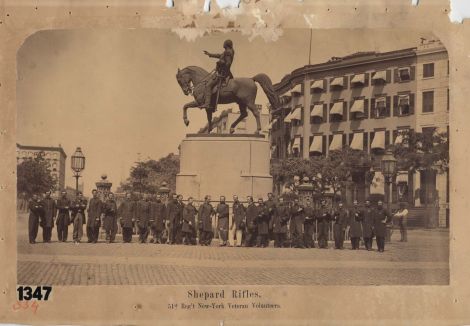 Memoirs of the late Adjt. Andrew L. Fowler of the 51st N.Y.V., who fell at the battle of Antietam bridge, September 17th, 1862, comprising the funeral discourse preached by the Rev. Dr. S. D. Burchard, letters of condolence by friends of the family, and abstracts of letters written by the Adjt. to his parents and friends. Compiled by a friend and dedicated to the family of deceased, Brooklyn, December 12th, 1863. New York: Ferris & Pratt, printers, 1863.

Smith, Jerry. Letters (1861-1865)
Description: 1 box (.25 cu. ft.)
Abstract:Group comprised of written letters by a soldier in regards to his military experiences.  One letter provides a detailed account of the battle of Roanoke Island, while two others describe the Union Army occupation of Jackson, Mississippi.
Located at the New York State Library Manuscripts and Special Collections.