January 17, 1863, Col. Spencer H. Olmstead, succeeded September 3, 1863, by Col. Henry M. Lazelle, received authority to recruit the Sprague Cavalry. July 27, 1863, Col. W. W. Hammill received authority to recruit the Washington Light Cavalry. July 29, 1863, Col. E. Schnepf received authority to reorganize the 20th N. Y. Volunteer Infantry, discharged by reason of the expiration of its term of service. October 14, 1863, these organizations were consolidated and the 16th Regiment of Cavalry formed, with Henry M. Lazelle as Colonel. The regiment was organized at Plattsburg, and the companies were mustered in the service of the United States for three years, at Plattsburg, A, B, C and D June 19th; E, G and H August 13th; and F August 1, 1863; at Staten Island, I September 2d; K September 22d; L October 18th, and M September 5, 1863. October 22, 1863, some of the men recruited for this, were transferred to the 18th Regiment of Cavalry.

Sixteenth Cavalry.—Cols., Henry M. Lazelle, Nelson B. Sweitzer; Lieut. -Cols., Spencer H. Olmstead, George S. HoUister, John Nicholson; Majs., Morris Hazzard, George B. Bosworth, Giles G. Horton, John Nicholson. Lawrence Leahy. The i6th, known as the Sprague Light Cavalry, was organized at Plattsburg, the companies of which it was composed being recruited in the counties of Clinton, Erie, New York, Westchester, Monroe, Oswego, Rensselaer and St. Lawrence. The first eight companies were mustered into the U. S. service at Plattsburg from June 19 to Aug. i, 1863, for three years; I, K, L and M were mustered in at Staten island from Sept. 2 to Oct. 18, 1863. On Aug. 17, 1865, the regiment commanded by Col. Sweitzer, was consolidated with the 13th N. Y. cavalry, and the new organization was designated the 3d provisional regiment, N. Y. volunteer cavalry. Cos. A, B, C and D left the state on June 19, 1863, and took part in the Gettysburg campaign; E, F, G and H, under Lieut.-Col. Olmstead left on Aug. 19, 1863; I, K and L left in September, and M on Oct. 23. The regiment was assigned to the cavalry brigade, 22nd corps, defenses of Washington, until the period of its consolidation with the 13th. In 1863 it engaged with loss at Lewinsville; was active at Bristoe Station and near the Blue ridge. In 1864 it was repeatedly in action, its principal engagements and casualties being as follows: Centerville, loss 39; Falls Church, 23; Rapidan Station, 13; Lewinsville, 16. It saw its last fighting in March, 1865, at Warrenton, Fairfax Court House and Vienna. The regiment lost during service i officer and 20 men killed and mortally wounded; 119 men died of disease, accidents, in prison, etc.—total deaths 140. Capt. James H. Fleming was killed at Fairfax Station and was the only commissioned officer lost by the regiment. 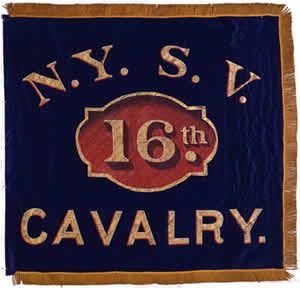 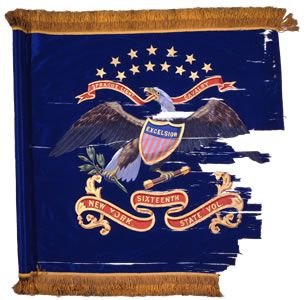 The standard carried by the 16th Cavalry features, in paint, the Arms of the United States with 13 gold stars and a red ribbon with the regiment's… 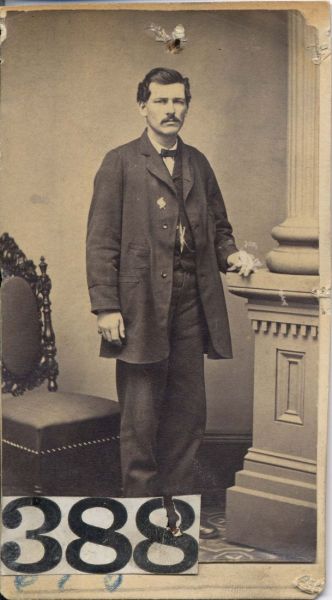 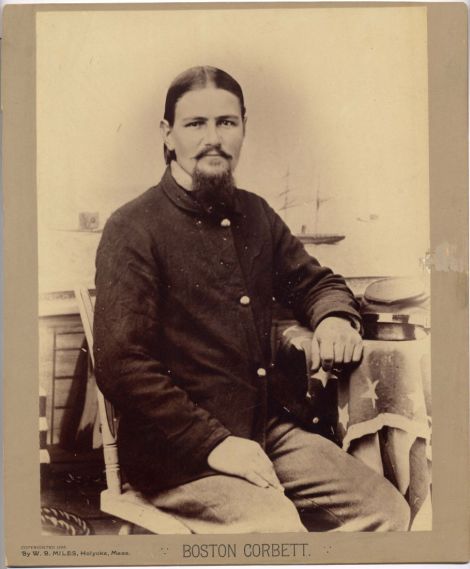 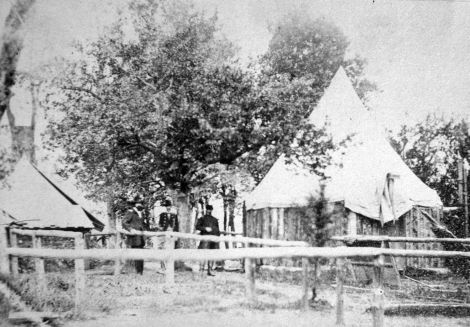 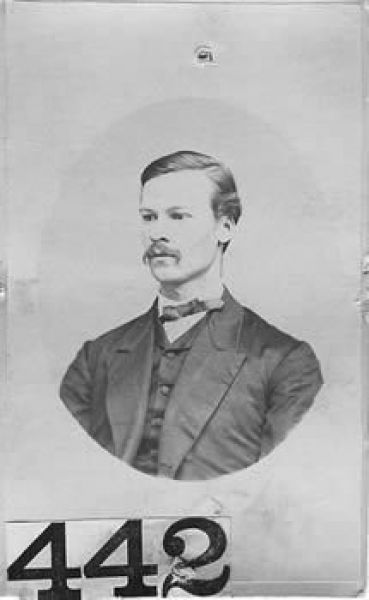 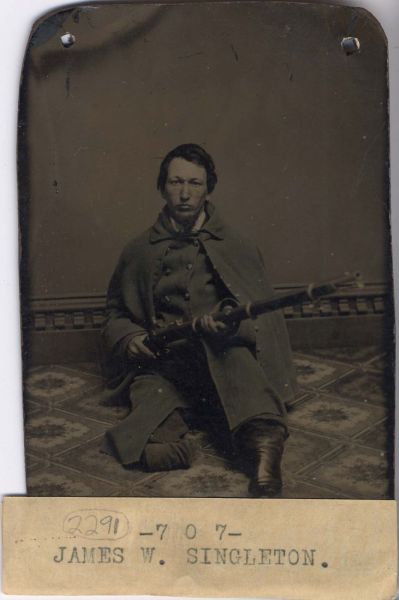 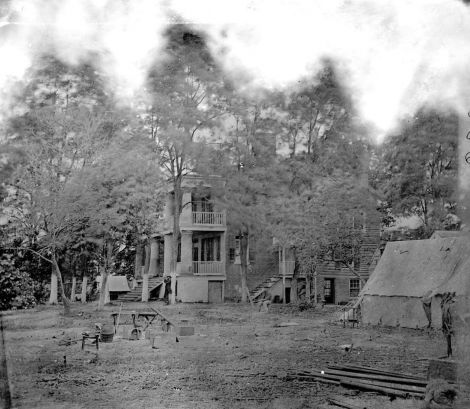 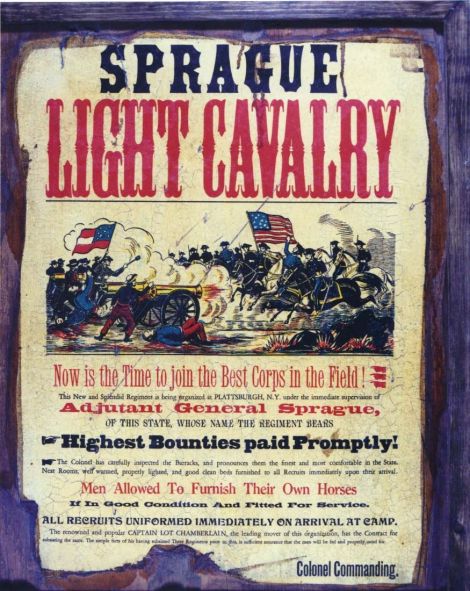 Carson, James. Chasing Mosby, Killing Booth:The 16th New York Volunteer Cavalry. McFarland & Com., Inc. Publishers,Jefferson, NC, 2017.
An in-depth regimental history that draws on personal letters, diaries and memoirs by men of the 16th, and the recollections of Mosby’s men. The book covers the regiment’s service from its initial mustering and training through its operations against John Mosby’s Confederate Rangers while participating in the defenses of Washington, DC, and the capture of Lincoln assassin John Wilkes Booth by a patrol of the 16th New York.

Martin, Albert G. Papers, 1863 May 29-1884 May 7.
Abstract: Martin's letters are not particularly eloquent, but are nonetheless interesting for their point of view. The anguish expressed in the first three of his letters is particularly moving, as he attempted to come to grips with the feeling that he had abandoned his mother and to console her and let her know that he intended to behave as a moral man. While in the service, Martin provides two very good, though brief, descriptions of scrapes with Mosby's Rangers, and his reactions to the desertions in his regiment and his thoughts on the war are of interest because they represent the views of a Canadian citizen, rather than a native New Yorker. Finally, the single letter written from Belle Isle stands in stark contrast to the miserable impressions of the prison found in other Union soldiers' letters: "I cant complain of the useage for we get used vary well here all is a fellow cant run about as much is if he was in his own Lines" (1863 November 6).
Located at William L. Clements Library, The University of Michigan, Schoff Civil War Collection - Soldiers' Letters 41.

Couture, Jan. The men who chased John Wilkes Booth, and their ties to Clinton County. (video)