This regiment, Col. Rush C. Hawkins, was organized in New York city, and there mustered in the service of the United States for two years, May 4, 1861; it was accepted by the State, and received its numerical designation, May 13, 1861. One company was formed of members of the 18th Regiment, State Militia, and Company K was equipped as an artillery company, and served as such until November 10, 1862.
The regiment was recruited principally in New York city; but some of its members were enrolled at Albany, Brooklyn, Hyde Park, Green Point, Mamaroneck, Mt. Vernon, Newburgh, Staten Island, Sing Sing and Williamsburgh; in Connecticut, New Jersey and Canada.
It left the State, June 6, 1861; served at Newport News, Va., from June 8, 1861; Companies C, G and H at Hatteras, N. C., from August 27, 1861; the regiment from September 10, 1861; in the 3d Brigade, Burnside's Expeditionary force, from January, 1862; at Roanoke, N. C, from February 3, 1862; in 4th Brigade, Hawkins' Coast Division (3d), 9th Corps, from March, 1862; in the 1st Brigade, 3d Division, 9th Corps, from July, 1862. May 6, 1863 the three years' men of the regiment, which latter had left for New York city, May 3, 1863, were assigned to the 3d Infantry, and May 20, 1863, the regiment, under Colonel Hawkins, was honorably discharged and mustered out at New York city.
In April or May, 1863, the War Department authorized Capt. R. H. Morris of this regiment to organize a battery of members of his regiment, whose term of service had not expired. It was to consist of 110 men, but failed to complete its existence; 44 of the men assigned to the proposed battery deserted, the remainder were assigned to the 3d Infantry.
During its service the regiment lost by death, killed in action, 2 officers, 53 enlisted men; of wounds received in action, 16 enlisted men; of disease and other causes, 2 officers, 27 enlisted men; total, 4 officers, 96 enlisted men; aggregate, 100; and it, or portions of it, took part in the following engagements.

Ninth Infantry.—Col., Rush C. Hawkins; Lieut.-Cols., George F. Betts, Edgar N. Kimball; Majs., Edgar A. Kimball, Edward Jardine. The 9th, Hawkins' Zouaves, recruited mainly in New York city and with 1 company from the 18th regiment state militia, was there mustered into the U. S. service on May 4, 1861, for a two years' term. It embarked for Fortress Monroe, 800 strong on June 6; was quartered at Newport News until Aug. 27, when 3 companies were sent to Hatteras Inlet, N. C., under Gen. Butler and there joined by the remainder of the regiment on Sept. 13. With Gen. Burnside's force, the regiment arrived at Roanoke island, early in Feb., 1862, and was actively engaged in the battle there, losing 17 members. It participated in an expedition to Winston; returned to Camp on Roanoke island; was brigaded with the 89th N. Y. and 6th N. H. under Col. Hawkins; was in expeditions to Elizabeth City, and lost 75 men at South Mills. On July 10, the regiment was ordered to Norfolk, Va., with the 12th brigade, 3d division, 9th corps, camped at Newport News, until Sept. 4, when it moved to Washington, and to Frederick, Md., on the 12th. Here it became a part of the Army of the Potomac; was active at South mountain and Antietam, with a loss in the latter battle of 233 killed, wounded and missing. After camping in detachments at various points, the regiment was concentrated at Fredericksburg, participated in the battle there in December; camped at Falmouth until Feb. 1, 1863, except Co. F, which had remained as garrison at Plymouth, N. C., rejoining the regiment on Jan. 26. In February the 9th was ordered back to Suffolk, where it remained until May, the expiration of its term of service. It was mustered out at New York City, May 20, 1863, when the three years men were assigned to the 3d N. Y. infantry. The 9th numbered in all 1,380 members and lost 71 by death from wounds, and 29 by death from other causes. 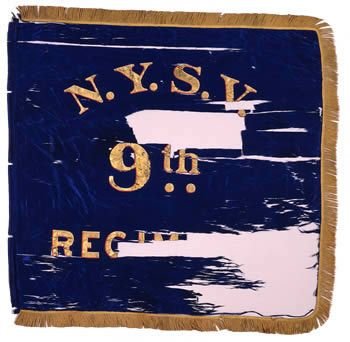 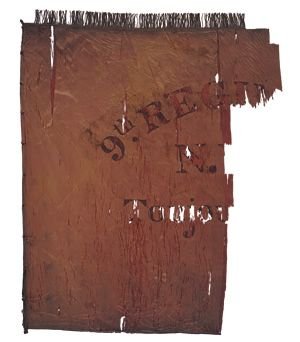 The 9th Regiment NY Volunteer Infantry received this silk Regimental Color on June 5, 1861, from Mrs. William Moffat outside her home on Fifth Avenue… 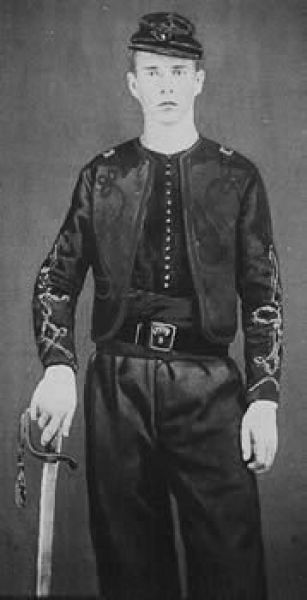 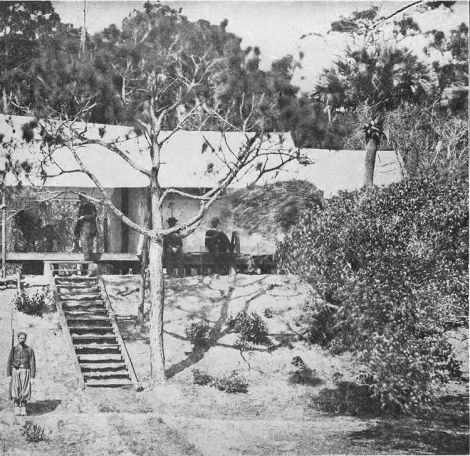 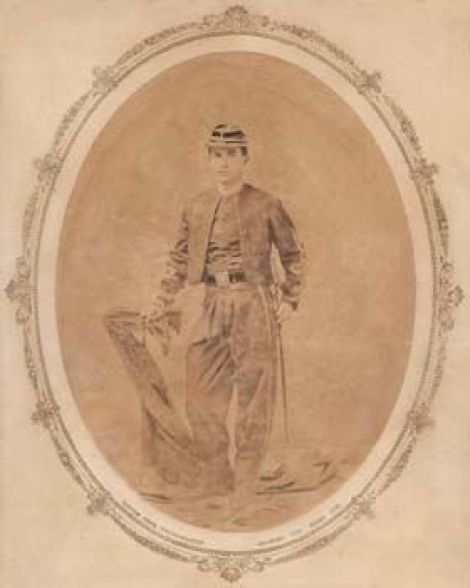 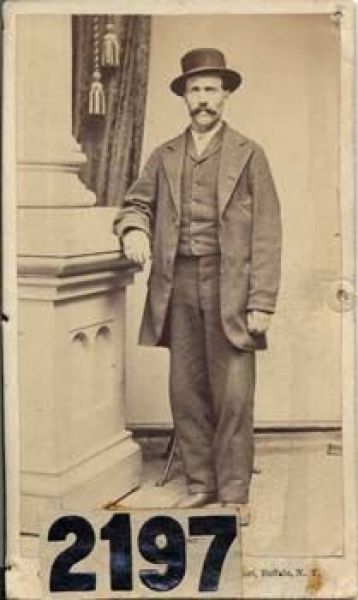 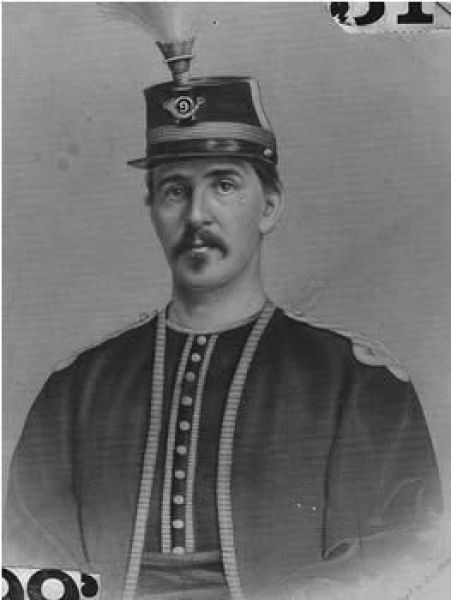 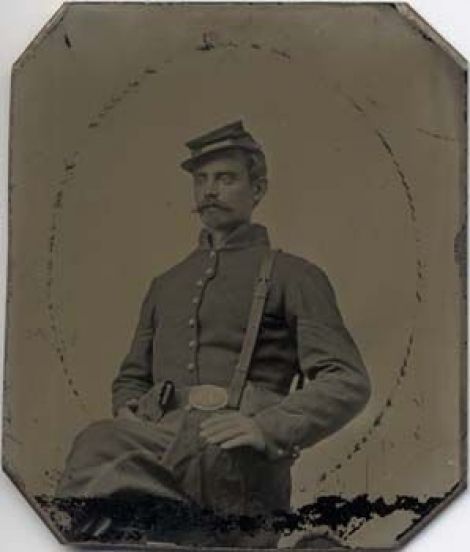 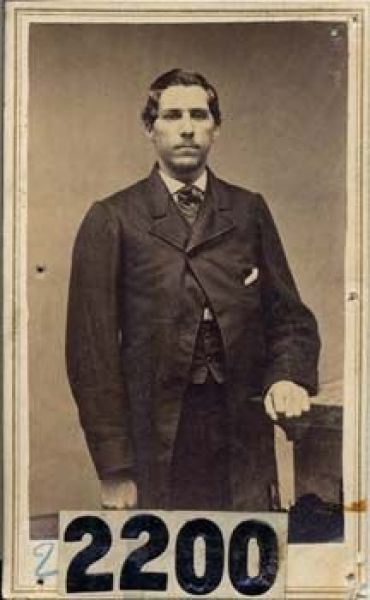 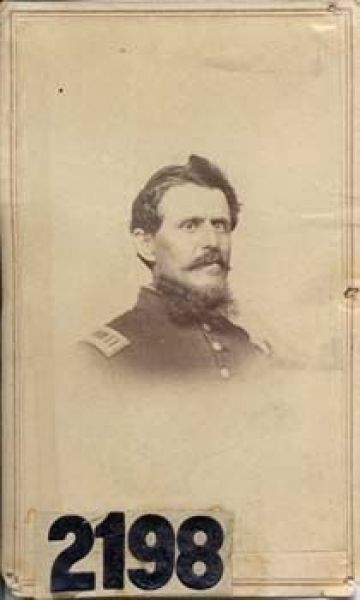 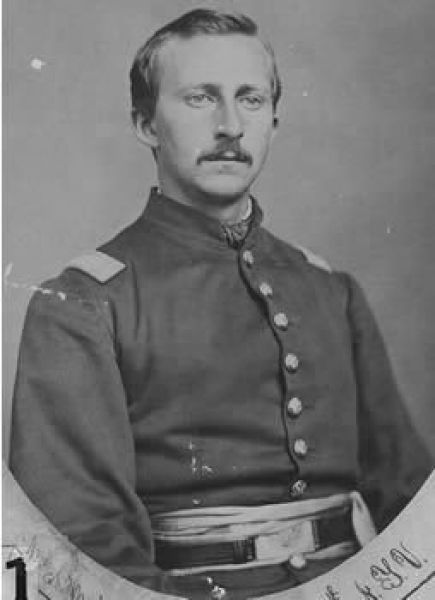 Burns, William H. My personal recollections of the War, 1861, 1862, and 1863. [St. Paul, Railroader Print. House, 1920s].
Located at the University of Virginia and the Minnesota Historical Society.

England, John, and William Kelby. John England Letters to William Kelby. 1861. Print.
Letters from John England to William Kelby, dated between December 12, 1861 and November 8, 1862, describing his service with the 9th New York in North Carolina, Mississippi, and Virginia. He describes conditions on Hatteras Island, the voyage from North Carolina to Ship Island (Miss.), sailing up the Mississippi to anchor below Vicksburg, where he describes serious illnes, and marches in Virginia. Accompanied by a typed transcript of the first two letters, written at Hatteras Island (N.C.).
New York Historical Society.

Glaser, Charles William. Papers, 1861-1891, bulk 1861-1864.
Description: 137 items.
Abstract: Chiefly correspondence from Glaser to his family while he served with New York's 9th Infantry Volunteers (1861-1863), Hawkins' Zouaves, and 17th Infantry Veteran Volunteers (1863-1864). A few letters from his brother, who served in the U.S. Army's 14th Infantry Regiment, including those relating to his participation in the Battle of Petersburg, Va., in 1864. Includes ordanance store reports of New York's 17th Infantry Veteran Volunteers and a few other miscellany items.
Located at Duke University.

Hawkins, Rush C.. An account of the assassination of loyal citi zens of North Carolina for having served in the Union army, which took place at Kingston in the months of February and March 1864. New York, 1897.

Hawkins, Rush C. An account of the assassination of loyal citizens of North Carolina for having served in the Union Army which took place at Kingston in the months of February and March, 1864. New York : [s.n.], 1897.

Horner, James B. James B. Horner papers, 1861-1915.
Description: 1 box (ca. 300 items)
Abstract: Muster rolls, ordnance returns, and quartermaster returns of Company H, 17th Regiment, New York State Volunteers, 1863-1865, along with a few special orders, discharges, and a small group of personal papers, 1861-1915, of Major James B. Horner of New York City. Personal papers include invitations and ephemera pertaining to attendance of civic and military events, parades, etc.; along with a few military documents concerning his service in the 9th New York Infantry Regiment and a group of 1915 condolence letters written by associates in the military and pharmaceutical industry on the occasion of Horner's death in 1915, and addressed primarily to his business partner, Joseph Mathias.
Located at the New York Historical Society.

Langbein, J C. J. Hawkin's Zouaves Militia. 1865. Print.
Contains items related to an association begun by Hawkin's Zouaves, or the 9th New York Volunteers, to start a militia of those honorably discharged "from the late war"; and items concerning the resulting militia, that is, the New York 1st Infranty Regiment. Many of the items concern the history and activities of the regiments.
Houghton Library, Harvard University.

Langbein, John Christopher Julius. The colors of the 9th regiment, N.Y. volunteers, Hawkins' zouaves, a retrospect of thirty-eight years. New York, June 3, 1889.
Contains items related to an association begun by Hawkin's Zouaves, or the 9th New York Volunteers, to start a militia of those honorably discharged "from the late war"; and items concerning the resulting militia, that is, the New York 1st Infranty Regiment. Many of the items concern the history and activities of the regiments.
Houghton Library, Harvard University.

Morris, Richard Henry. Letters, 1861-1863.
80 pages of transcribed letters written to his mother, by Captain Richard Henry Morris, who served with the 9th Infantry Regiment from April 23, 1861 to May 20, 1863. The letters cover the time period June 6, 1861 to April 23, 1863. Subjects written about include battle descriptions, day to day life within the regiment, impressions of other regiments, opinions of senior officers, etc.
Donated by David Gardner.

Rothert, William. Diary, 1861 Aug.-1862 Jul.
Abstract: Pocket diary, 1861 Aug.-1862 Jul., kept by Union soldier William Rothert while serving in the 9th New York Volunteer Regiment (Hawkins Zouaves), Company "D." Rothert writes of his military experiences, engagements with the enemy, battles at Roanoke Island and South Mills, Virginia; daily activities and events in camp, etc. Also included are a few simple pencil sketches of Zouaves and ships in harbor on the front and back paste downs, along with the original pencil accompanying the volume.
Located at the New York Historical Society.

Thompson, David L. David Ludlow Thompson correspondence, 1862-1865.
Description: 0.4 linear feet (1 box)
Abstract: Correspondence, 1862-1865, consisting of letters written during Thompson's Civil War service to his mother, Keturah Sayre Thompson, his sister, and Elias Fairchild. A letter written from a prisoner of war camp in Richmond (Va.) in October 1862 describes his experiences at Antietam. The collection includes a wooden spoon which he carved in Libby Prison. Other letters, written while he was serving with the 9th New York (Hawkins' Zouaves), and later with the 3rd New York, describe army life, mainly in Virginia and South Carolina, and discuss news of family and friends, with occasional political comments. A letter dated August 1863 describes his time in an army hospital in Portsmouth (Va.) He writes vividly and with wit about the weather, the meagre and inedible rations, the ill-fitting garments provided by the U.S. Sanitary Commission, his poor attempts to mend his clothing, his scurvy, and his troubles with lice and other vermin. The letters are accompanied by (inaccurate) typed transcripts, as well as some biographical information and photocopies of published articles by Thompson about his Civil War experiences.
Located at the New York Historical Society.

Thompson, David L. "With Burnside at Antietam." Battles and leaders of the Civil War ... : being for the most part contributions by Union and Confederate officers. Based upon "The Century War series.". New York: Century Co, 2 c1887. 660-662.

Thompson, David L. "In the ranks to the Antietam." Battles and leaders of the Civil War ... : being for the most part contributions by Union and Confederate officers. Based upon "The Century War series.". New York: Century Co, 2 c1887. 556-558.