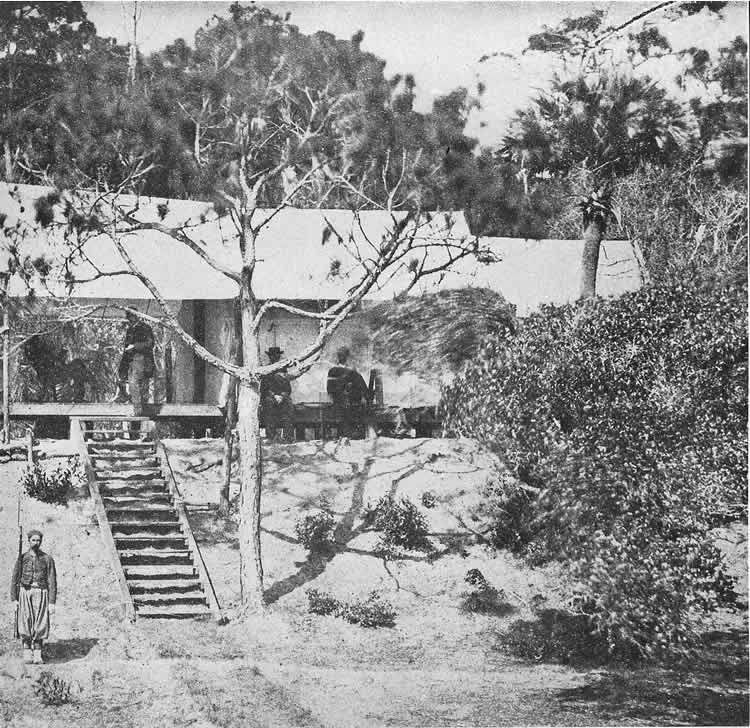 ONE FOREIGN UNIFORM RETAINED THROUGHOUT THE WAR—A "RUSH HAWKINS' ZOUAVE" AT GENERAL GILLMORE'S HEADQUARTERS, 1863
The vivid sunlight in this photograph makes the grass and roof look almost like snow, but the place is Folly Island before Charleston in July, 1863. In the foreground to the left stands one of Rush Hawkins' Zouaves, from the Ninth New York Infantry, He adheres to his foreign uniform, although most of the white gaiters and other fancy trappings of the Union army had disappeared early in '62. But his regiment did good service. It fought at South Mountain, at Antietam, and Fredericksburg, with much scouting and several forced marches before it was mustered out May 20, 1863. The three-years men, after they were assigned to the Third New York Infantry, which was ordered to Folly Island in July, 1863, retained their uniforms when in entire companies. The scene is the headquarters of General Quincy Adams Gillmore, who was promoted to lieutenant-colonel April 11, 1862, for gallant and meritorious service in the capture of Fort Pulaski, Ga., and to colonel, March 30, 1863, for gallant and meritorious service in the battle of Somerset, Ky. He became major-general of volunteers in July, 1863. Note the black shadows cast by the soldier and the tree.