The following is taken from New York in the War of the Rebellion, 3rd ed. Frederick Phisterer. Albany: J. B. Lyon Company, 1912.
This regiment, then located in the counties of Greene and Ulster, but now not in existence, was ordered, April 23, 1861, to proceed to Washington, D. C. May 3, 1861, this order was revoked, the regiment being already at New York city en route. It was finally permitted to leave and left the State, May 7, 1861 (nine companies), commanded by Col. Geo. W. Pratt. It was mustered in the United States service May 11, 1861, to date April 23, 1861, at Annapolis, Md., to serve three months. It served at Annapolis, and at Baltimore, Md., and was mustered out at Kingston, August 2, 1861.
Shortly after its return it volunteered, organized and was accepted for a three years' service, and December 7, 1861, it received the designation 80th Volunteers, under which head its volunteer history will be found.
The regiment lost during its three months' service in 1861, by death, of disease two enlisted men.

The following is taken from Third Annual Report of the Bureau of Military Statistics of the State of New York, Albany: [The Bureau], (C. Wendell), 1866.
TWENTIETH REGIMENT N. Y. S. MILITIA.
The Twentieth regiment was organized in the county of Ulster, and is in the Eighth brigade, Third division of the State Military organization. The following were the field officers:
Colonel—George W. Pratt.
Lieutenant-Colonel—Hiram Schoonmaker.
Major-Theodore B. Gates.
The Twentieth regiment, had long been favorably known in the militia organization of the Slate, and its gallant commander, Col. Pratt, had for many years been identified with every measure hav ing for its object the elevation of the militia system.
Most of the uniformed regiments, composing our State force, at the breaking out of the rebellion, were within the large cities and towns. The Twentieth was made up from citizens of the rural districts, men whose lives had been passed among the hills of Ulster and Greene, hardy sons of toil, many of them employes in the large tanneries in that section of the State. The record of the regiment, which went through the entire war, is an honorable one. Its commanding officer lost his life from a wound received in the second battle of Manassas. Its ranks were over and over again recruited from the counties in which the regiment was originally raised, and there is scarce a battle-field in Maryland, Virginia or Pennsylvania, which was not moistened with the blood of members of the New York Twentieth Militia. Major-General Cooper commanding the Third division, had been directed by Special Orders No. 76, of April 23d, to detail the Twentieth regiment for immediate service, to report at Washington. Many delays however attended its departure, and even after its arrival in the city of New York en route; for the National Capital, it was quartered for more than a week at the Park Barracks, before receiving final orders to move. These delays were very annoying to all the members of the regiment. They reached New York on the 28th of April, and up to the 5th of May no transportation had been provided for them. They then received orders to return to their homes, as advices had arrived from Washington, calling only for volunteers to serve for two years--and for this reason it was alleged, no more militia regiments could be accepted.
This order caused great consternation among the rank and file. They had enlisted in the hope of being engaged in the impending conflict. Many of them had given up lucrative positions, left homes and families, for the purpose of manifesting their patriotism and sustaining the honor and integrity of the flag. On the following evening, May 6th, a special order was received directing them to proceed onward at once. When this news was imparted to the troops, a scene of genuine enthusiasm ensued. The President, the Governor, General Scott and Colonel Pratt were successively cheered.
The Colonel himself was deeply affected at the enthusiasm manifested by his men, and took no measures to check their outbursts of joy. He made a few remarks, thanking them for the manner in which they had borne the many disappointments to which they had been subjected, and congratulating them upon the prospect of a speedy entry upon active service. He said "they would come back covered with glory."
How true was this prophecy! How literally has it been fulfilled! He who uttered it sleeps with the honored dead, "covered with glory," and the regiment of which he was so proud, and of whose every interest he was so watchful, can point with a melan choly pride to its tattered banners and depleted ranks, while the battle-fields of the Peninsula, of Manassas, Antietam, South Mountain, Fredericksburg and Gettysburg bear eloquent witness to its devotion and bravery.
Upon leaving New York on the 7th of May, the regiment went by railroad to Perryville and thence by steamer to Annapolis, and spent its three months term of service in guarding the railroad, on picket duty, and on guard at Baltimore. The strength of the regiment at the time of departure from the State was 785. It passed an inspection in presence of its officers and several military celebrities who had assembled to witness its departure, after which the line of march was taken up, and the command wheeled out of the west gate of the Park, (New York) and filed down Broadway to Cortland street to the ferry. The officers were finely mounted, and the general appearance of the regiment elicited great praise from the spectators.
Upon the return of the regiment to Ulster county, on the 3d of August, after the expiration of its term of service, the military, the firemen, and a large number of citizens of Rondout and Kingston turned out to receive them. They were shortly after mustered out of service, when Colonel Pratt offered the regiment for a period of three years to the Government. It was accepted, and was at once re-equipped and uniformed, and entered the United States Service, being known as the Eightieth New York Volunteers, as well as by the title of Twentieth N. Y. S. Militia. 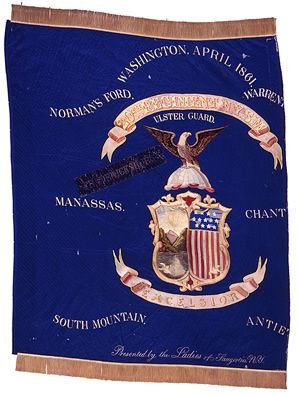 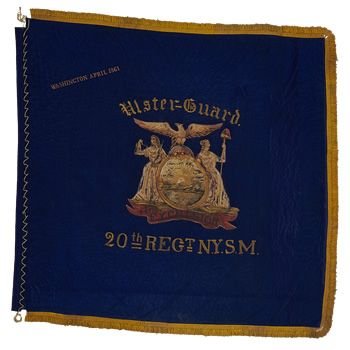 On August 31, 1858, citizens from Ulster County’s two most populous communities, Kingston and Roundout, gathered on a green between the two towns and…