The following is taken from New York in the War of the Rebellion, 3rd ed. Frederick Phisterer. Albany: J. B. Lyon Company, 1912.
Mr. Henry S. Armstrong received authority, August 25, 1862, to recruit this regiment in Oneida county; it was organized at Rome, with Kenner Garrard as Colonel; and there mustered in the service of the United States for three years October 10, 1862. It received by transfer the three years' men of the 5th and 17th Infantry May 4 and June 25, 1863, respectively; a few men, who had originally been members of the 2d, 9th, 16th, 18th, 30th, 34th and 37th Infantry, in January and April, 1864; and some of the men of the 44th not mustered out with their regiment, October 11, 1864.
The companies were recruited principally: A at Utica; B at Vernon, Rome and Annsville; C at Utica and Rome; D at Boonville, Hawkinsville, Rome and Whitestown; E at Camden, Augusta, Rome, Utica and Marshall; F at Utica, Lee, Rome, Florence, Annsville, Ava, Marcy and Whitestown; G at Clinton, Kirkland, Bridgewater and Plainfield; H at Utica, Rome and Sangerfield; I at Trenton, Remsen, Western, Westmoreland, Steuben, Lowell, Rome, Vernon and Verona, and K at Paris, Clayville, Utica, Marcy, Clinton, Deansville, Marshall and Whitesboro.
The regiment left the State October 11, 1862; it served in Casey's Division, defenses of Washington, from October, 1862; in the 3d Brigade, 2d Division, 5th Corps, from November 6, 1862; in the 1st Brigade, 5th Division, 5th Corps, from March, 1864; in the 1st Brigade, 2d Division, 5th Corps, from June 6, 1864; and, commanded by Col. James J. G. Grindlay, it was honorably discharged and mustered out, July 16, 1865, near Washington, D. C.
During its service the regiment lost by death, killed in action, 3 officers, 81 enlisted men; of wounds received in action, 4 officers, 46 enlisted men; of disease and other causes, 2 officers, 187 enlisted men; total, 9 officers, 314 enlisted men; aggregate, 323; of whom 1 officer, 87 enlisted men died in the hands of the enemy.

The following is taken from The Union army: a history of military affairs in the loyal states, 1861-65 -- records of the regiments in the Union army -- cyclopedia of battles -- memoirs of commanders and soldiers. Madison, WI: Federal Pub. Co., 1908. volume II.
One Hundred and Forty-sixth infantry.—Cols., Kenner Garrard, David T.. Jenkins, James Grindlay; Lieut-Cols., David T. Jenkins, William S. Corning, Jesse J. Armstrong, Henry H. Curran, James Grindlay, Peter Claesgens; Majs., David T. Jenkins, William S. Corning, Henry H. Curran, James Grindlay, Peter Claesgens, Isaac P. Powell. The 146th, known as the 5th Oneida, or Garrard's Tigers, recruited in the county of Oneida, was organized at Rome, and there mustered into the U. S. service for three years on Oct. 10, 1862. In May and June, 1863, it received by transfer the three years' men of the 5th (the famous Duryee Zouaves) and the 17th N. Y. infantry, and in 1864, a few additions from the 2nd, 9th, 16th, 8th, 30th, 34th, 37th and 44th N. Y. The regiment left the state on Oct. 11, 1862, for Washington and in November, joined the Army of the Potomac at Snicker's gap, Va., where it was placed in Warren's (3d) brigade, Sykes' (2nd) division, 5th corps, a division chiefly composed of regulars. It marched with this command to Fredericksburg, where it fought its first battle, losing 1 mortally wounded and 17 missing or captured. At Chancellorsville the regiment suffered heavily on the first day of the fight and acquitted itself with honor, losing 50 killed, wounded and missing, and at Gettysburg it again fought gallantly, losing 28 killed and wounded. Col. Garrard was made brigadier-general for gallant conduct at Gettysburg. The regiment participated with little loss in the subsequent Virginia campaigns, ending with that of Mine Run, being present at Rappahannock and Bristoe Stations. Col. Fox in his account of this regiment says: "The regiment encountered its severest fighting at the battle of the Wilderness, May , 1864, where it suffered a terrible loss, not only in killed and wounded, but in captured men. Col. Jenkins and Maj. Curran were killed in that bloody encounter, while the total loss of the regiment was 20 killed, 67 wounded and 225 captured or missing. In 865, the regiment was in Winthrop's (1st) brigade, Ayres' (2nd) division, and was prominently engaged in that command at the battles of White Oak road, and Five Forks, Gen. Winthrop being killed in the latter engagement while leading a successful charge of the brigade. The 146th was well drilled and at one time wore a conspicuous Zouave uniform. Gen. Joseph Hayes, its last brigade commander, in taking leave of the regiment wrote: associated for a long time with the infantry of the regular army, the 146th yields the palm to none'." The regiment took part in a number of important battles among which were Fredericksburg, Chancellorsville, Gettysburg, Williamsport, Md., Wilderness, Spottsylvania (including the engagements at Piney Branch Church, Laurel Hill and Gayle's house), North Anna, Totopotomy, Cold Harbor, siege of Petersburg, Weldon railroad, White Oak ridge and Five Forks. It was also present at Rappahannock Station, Bristoe Station, White Oak swamp, Poplar Spring Church, Hatcher's run and Appomat-tox, the loss in the final Appomattox campaign, being 65 killed, wounded and missing. Commanded by Col. Grindlay, the regiment was mustered out near Washington, D. C., July 16, 1865. Its total enrollment during service was 1,707, of whom 7 officers and 126 men were killed and mortally wounded; 2 officers and 187 men died of disease and other causes, a total of 324, of whom 1 officer and 87 men died in the hands of the enemy. 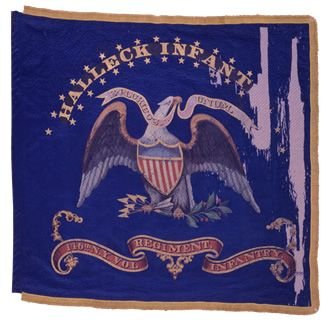 Organized in Rome, Oneida County, the 146th New York Volunteers mustered into service in October 1862. Known as the “Halleck Infantry” after Oneida… 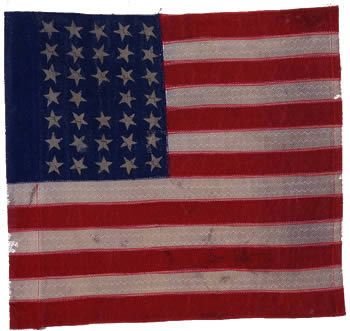 These printed wool camp colors in the US national pattern adhere to the specifications prescribed in General Order No. 4, Headquarters of the U.S.…

Barnes, James. Correspondence, 1862-1865.
Chiefly his correspondence to his wife, Catherine Barnes (1862-1865). Other correspondents to Mrs. Barnes are William T. Tull, chaplain at the Washington Street Hospital and Arthur B. Johnson.
52 items.

Grindlay, James Glass. "The 146th New York at Little Round Top." Battles and leaders of the Civil War III 315.

Kennedy, Eric. "Oneida County and Waterville in The Civil War." The Waterville Times. July 8 and August 5, 2009.

Wright, Benjamin Franklin. "From the Wilderness to Richmond." Mollus-Minn. II 7-37.