The following is taken from New York in the War of the Rebellion, 3rd ed. Frederick Phisterer. Albany: J. B. Lyon Company, 1912.
Colonel John A. Griswold was authorized, July 28, 1862, to raise this regiment in Rensselaer county; on his resignation, Col. George L. Willard succeeded him August 15, 1862; the regiment was organized at Troy and there mustered in the service of the United States for three years August 27-29, 1862. The men not entitled to be mustered out with the regiment were, June 5, 1865, transferred to the 4th Artillery.
The companies were recruited principally: A at Hoosick Falls; B, D and H at Troy; C at Lansingburg, Troy, Sandlake, Pittstown and Schaghticoke; E at Sandlake, Stephentown, Nassau and Hoag's Corner; F at Troy and Poestenkill; G and I at Troy and New York City, and K at Schaghticoke and Troy.
The regiment left the State August 31, 1862; it served in the 2d Brigade, from September, 1862, at Harper's Ferry, W. Va., where it was surrendered; at Camp Douglas, Chicago, Ill., from September 27, 1862; in the defenses of Washington, in 1st Brigade, Casey's Division, and later 22d Corps, from December, 1862; in the 3d Brigade of the same, from January, 1863; in the 3d Brigade, 3d Division, 2d Corps, from June, 1863; in the 3d, for a time in the Consolidated, Brigade, 1st Division, 2d Corps, from April, 1864; and, commanded by Col. Joseph Hyde, it was honorably discharged and mustered out June 5, 1865, near Alexandria, Va.
During its service the regiment lost by death, killed in action, 7 officers, 70 enlisted men; of wounds received in action, 8 officers, 42 enlisted men; of disease and other causes, 1 officer, 115 enlisted men; total, 16 officers, 227 enlisted men; aggregate, 243; of whom 3 officers, 61 enlisted men died in the hands of the enemy.

The following is taken from The Union army: a history of military affairs in the loyal states, 1861-65 -- records of the regiments in the Union army -- cyclopedia of battles -- memoirs of commanders and soldiers. Madison, WI: Federal Pub. Co., 1908. volume II.
One Hundred and Twenty-fifth Infantry.—Cols., George L. Wil-lard, Levin Crandell, Joseph Hyde; Lieut.-Cols., Levin Crandell, Aaron B. Myer, Joseph Hyde; Majs., James C. Bush, Aaron B. Myer, Samuel C. Armstrong, Joseph Hyde, Joseph Egolf, Nelson Penfield, William H. H. Brainard. This regiment, recruited in the county of Rensselaer, was organized at Troy, and there mustered into the U. S. service on Aug. 27-29, 1862, for three years. Two days later it left for Harper's Ferry, where it was captured on Sept. 15, at the surrender of that post. The regiment was immediately paroled and was stationed at a paroled camp at Chicago, 111., for two. months, when the men were declared exchanged and returned to Virginia in December. It was encamped at Centerville during the winter and in the spring of 1863 was attached to Gen. Hays' brigade. In June, 1863, the brigade joined the 3d division, 2nd corps, then marching to Gettysburg, Gen. Hays taking command. of the division. At the battle of Gettysburg Col. Willard was killed while in command of the brigade and the loss of the regiment amounted to 26 killed, 104 wounded and 9 missing. It distinguished itself at Bristoe Station in October, both officers and men fighting with dash and extreme gallantry. Its loss in this action was 36 killed, wounded and missing. It was also present at the action of Mitchell's ford, and took part in the Mine Run campaign, with a loss of 41 men. Upon the reorganization of the Army of the Potomac in April, 1864, it was transferred to Barlow's (1st) division, to which it was attached during the remainder of its service. It lost 28 in killed, wounded and missing at the battle of the Wilderness, where Lieut-Col. Myer fell mortally wounded. At the Po river and Spottsylvania its loss was 10 killed, 74 wounded and 6 missing, while further severe losses were sustained at the North Anna, Cold Harbor, and the battles around Petersburg, where its losses aggregated 85 killed, wounded and missing. Recrossing the James it fought at Deep Bottom and Strawberry Plains, and upon returning to the lines around Petersburg it was engaged in the disaster at Reams' station, losing 9 wounded and 13 captured. It was present at Hatcher's run in December, but without loss. Its veteran ranks had been sadly decimated by its hard service and when the final campaign of 1865 opened it could report only 12 officers and 219 men "present for duty," although it still carried 547 names on its rolls. In this campaign the regiment participated in the final assault on Petersburg and the engagements of Deatonsville road, High bridge and Farmville, where it fought its last battle. The loss during the campaign was 32 killed, wounded and missing. The total enrollment of the regiment during service was 1,248, of whom 15 officers and 112 enlisted men were killed and mortally wounded, or 10.1 per cent.; 1 officer and 115 men died of disease and other causes; 3 officers and 61 men died in Confederate prisons; 464 officers and men were killed and wounded. It was mustered out near Alexandria, Va., under Col. Hyde, June 5, 1865, having gloriously earned its title as a fighting regiment. 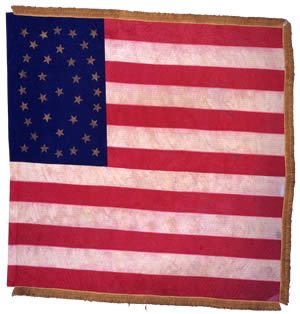 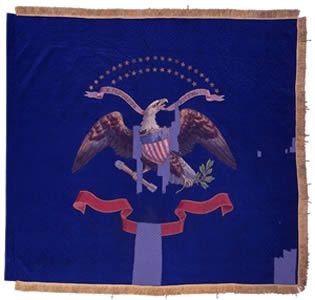 The New York State Battle Flag Collection includes one painted silk Regimental Color carried by the 125th Regiment. The color features the Arms of the… 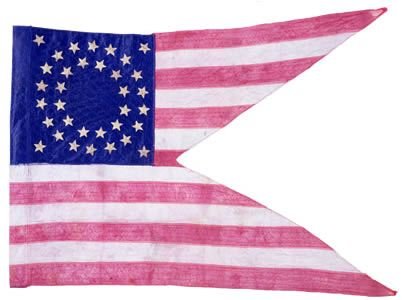 Bogert, David. Diary, 1862 Aug. 6-1863 May 19.
Diary of Captain David Bogert kept while serving with the 125th Regiment of the New York State Volunteers in Virginia, Maryland, Ohio, Illinois, and New York. Entries, many written from a hospital in Centreville, Virginia, include observations on his health, the weather, and daily life in camp. Bogert additionally notes the distances travelled by his regiment and records letters sent and recieved to and from his wife. News clippings with Bogert's 1915 obituary notice are inserted at the end of the volume.
Located at the New York Historical Society, New York, NY.

Crandell, Lewis H.  Lewis H. Crandell Civil War diary, 1863 Jan 1-Dec. 25.
Lewis H. Crandell's pocket diary containing over two-hundred pages of entries recording his Civil War experiences during the year 1863. Crandell used the cross-hatch technique in parts of his diary. Entries include an early January description when Crandell is assigned picket duty at Manassas, Va., and documents the aftermath of the fighting that occurred there four months earlier (Second Battle of Bull Run); entry (22 Feb.), he receives word that he has been promoted to lieutenant in Company E; entry (9 Mar.), telling of the capture of Union Gen. Edwin Stoughton by Confederate partisan John Mosby; entry (mid-March), describes Crandell being in charge of building barricades near the Union capital and documents a meeting with Gen. Silas Casey, who commanded a provisional brigade in Washington that was responsible for constructing defenses to protect the city; entry (25 Mar.), documenting Gen. Alexander Hays arrival and posting to the Washington defenses, after being wounded at the Second Battle of Manassas; entries throughout April record steady rain and the negative impact on the troops and transportation; entry (May), while still camped in the Washington area, Crandell writes about Gen. Franz Siegel and the death of Gen. Stonewall Jackson; entry (June), Crandell's company breaks camp and crosses the Potomac River into Virginia; entry (2 July), Crandell arrives in Gettysburg, Pa., where the battle was in it's second day; entry (3 July), description of the Gettysburg battle scene including the repulsion of "Pickett's charge"; and Crandell's final diary entry (25 Dec.) relating to his arrival home. Crandell would serve another six months before being mustered out on 10 June 1864.
1 item.
Located in the Pearce Civil War Collection, Navarro College, Corsicana, Texas.

Hagadorn, Francis T. Reminiscences (1863-1864).
An autobiographical narrative of Hagadorn's military service in three different regiments over the course of the war. It provides information on battles, skirmishes, camp life, and other personal matters.
3 v.
Located at the New York State Library Manuscripts and Special Collections.

Hartshorn, Edwin A. Civil War diary of Edwin A. Hartshorn.

Haynes, Calvin A.  Letters, 1862-1863.
Letters of Calvin A. Haynes to his wife, Lucy, dated September 3, 1862 - July 19, 1863. These letters provide details of the surrender at Harpers Ferry: he claims, "Miles sold us to the rebels". After parole he was ordered to Chicago, but the regiment returned east in the Fall of 1862 (they camped at Wolf Run Shoals and Bull Run Battle Field still littered with dead). In July 1863, the regiment faced Pickett's Charge at Gettysburg, well described in the final letter. The details of camp life are vivid and his description of his experiences at Harpers Ferry and Gettysburg are an interesting addition to the record of the 125th New York Regiment of Infantry.
25 items.
Located at the New York State Library Manuscripts and Special Collections.

Lord, George A. A short narrative and military experience of Corp. G.A. Lord. Containing a four year's history of the war, the Constitution of the United States in full, a correct list of stamp duties, and also patriotic songs of the latest selection. [Troy: 1864].

Myers, Aaron. Letters, 1863-1864.
Letters addressed to his wife Julia, in which he speaks mostly about family matters and how he was to endure much pain from the wounds inflicted at Gettysburg. There is very little about the atrocities of combat or hardships or life in camps.
8 items.
Located at the New York State Library Manuscripts and Special Collections.

United States. Army. New York Infantry Regiment, 125th (1862-1865). 125th New York Infantry records,1862-1865.
They consist mainly of muster rolls, some of which include the names of prisoners of war, but there are also vouchers (including some from army hospitals), receipts, and discharge papers, as well as some correspondence, including an affidavit about a lost paycheck. Some of the correspondence and papers are addressed to the regiment's paymaster, Levi C. Ball.
0.8 linear feet (2 boxes).
Located at the New York Historical Society, New York, NY.