Colonel Baron Philipe Regis DeTrobriand was authorized by the War Department, July 25, 1861, to recruit a regiment of infantry. The 55th State Militia formed the nucleus of this regiment, which was recruited mainly in New York city, and consisted principally of Frenchmen. The regiment was organized in camp near New Dorp, Staten Island, and there mustered in the service of the United States for three years August 28, 1861, except Company B, which was not then organized and which joined the regiment in the field in April, 1862. The State recognized the regiment and gave it its numerical designation December 7, 1861. September 29, 1862, the regiment was consolidated into four companies, A, B, D and F; Company A being formed of a new company, just joined; B of B and K, old; D of C and D, old; F of A and F, old; the men of the other companies being distributed among the new ones.
The regiment left the State August 31, 1861; served at Fort Gaines, Md., in September, 1861; in Peck's Brigade, Buel's, later Keyes', Division, Army of the Potomac, from October, 1861; in same brigade, Couch's Division, 4th Corps, Army of the Potomac, later 1st Brigade, 1st Division, 4th Corps, from March 13, 1862; in 3d Brigade, 1st Division, 3d Corps, from September, 1862; in the 2d Brigade, 1st Division, 3d Corps, Army of the Potomac, from November, 1862; and the battalion, Companies A, B, D and F, was transferred, December 21, 1862, to the 18th Infantry, as Companies G H, I and K, respectively.
During its service the regiment lost by death, killed in action, 16 enlisted men; of wounds received in action, 20 enlisted men; of disease and other causes, 29 enlisted men; total, 65; of whom 5 died in the hands of the enemy.

Fifty-fifth Infantry.—Col., Baron Regis De Trobriand; Lieut.-Cols., Louis Thourot, William H. King; Maj., Francis Jehl. The 55th, the "La Fayette Guard," composed mainly of members of French origin, was the outgrowth of the 55th militia, and was mustered into the U. S. service at New Dorp, Staten Island, Aug. 28, 1861, for three years. It left for Washington on Aug. 31, was ordered to Fort Gaines, Md., in September, and in October became a part of Peck's brigade, Buell's division, Army of the Potomac. In March, 1862, the regiment joined McClellan's army for the Peninsular campaign; participated in the siege of Yorktown and the battle of Williamsburg, serving with the 1st brigade, 1st division, 4th corps during the summer. In the battle of Fair Oaks, the loss of the regiment was 103 in killed and wounded, and during the Seven Days' battles it was employed in guarding trains. In the battle of Malvern hill the 55th was active and suffered considerable loss. In April, 1862, Co. B joined the regiment and in September, the regiment was consolidated into a battalion of four companies, which was assigned to the 3d brigade, 1st division, 3d corps, and in November, to the 2nd brigade of the same division. The command was actively engaged at Fredericksburg and on Dec. 21, 1862, was transferred to the 38th N. Y. infantry, with which the troops completed their term. The regiment lost during its service, 36 by death from wounds and 29 from other causes. On June 3, 1863, the members of the 38th who had not completed their term of enlistment were transferred to the 40th N. Y. The members of the 55th who did not reenlist were mustered out at New York city at the end of their term. 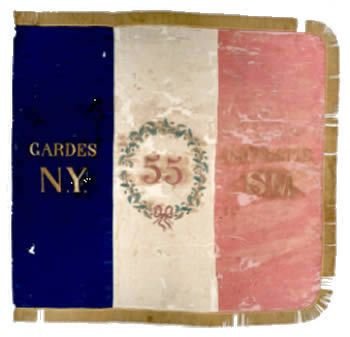 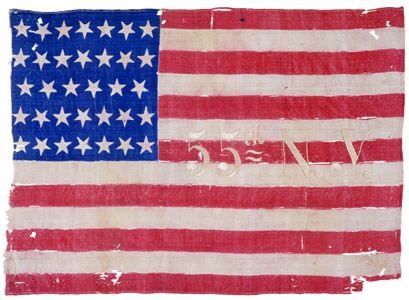 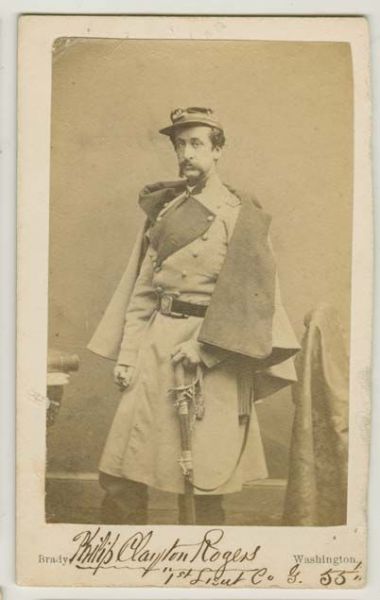 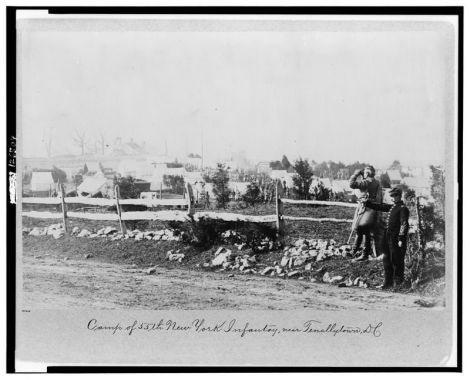 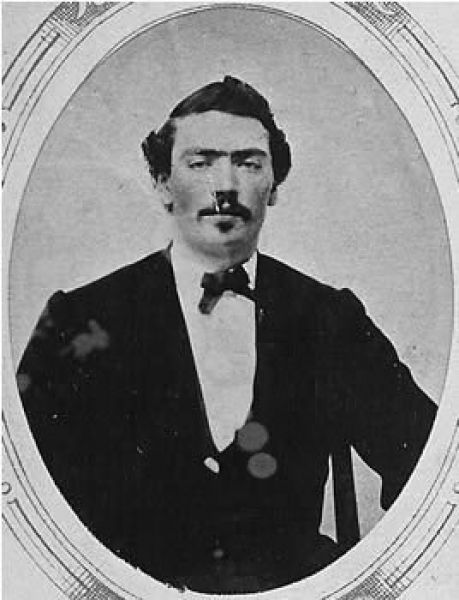 Camp of 55th New York Infantry, near Tenallytown, D.C.
Description: 1 photographic print
Abstract: Two soldiers by fence in foreground, with one of them looking through binoculars, with camp and large group of soldiers in background.