July 26, 1861, Col. Othneil De Forrest received authority from the War Department to recruit a brigade of cavalry for a service of three years. He recruited this regiment, as the Ira Harris Cavalry; after the organization had been turned over to the State, it was, October 16, 1861, designated the First Ira Harris Guard, and after its completion, November 14, 1861, the 5th Regiment of Cavalry. The Bliss Cavalry, an incomplete organization, recruited by Col. W. S. Bliss, was merged into the regiment, which was organized at Camp Scott, Staten Island, where its companies were mustered in the service of the United States: A on August 15, 1861; B on August 21, C on September 3, D on October 1, E on the 7th, and F on the 21st of September, G on the 9th, H on the 28th, and I, K, L and M, on the 31st of October, 1861. At the expiration of its term of service those entitled thereto were discharged and the regiment continued in the service.

Fifth Cavalry.—Cols., Othneil De Forest, John Hammond, Amos H. White; Lieut. -Cols., Robert Johnstone, John Hammond, William P. Bacon. Amos H. White, Theodore A. Boice; Majs., Philip G. Vaught, Washington Wheeler, John Hammond, Abram H. Krom, Elmer J. Barker, James Davidson, William P. Pratt, Amos H. White, Theodore A. Boice, George H. Gardner, William P. Bacon, James A. Penfield, Tiberly C. Abbott, Henry A. D. Merritt. Authority to recruit this regiment was received by Col. De Forest from the war department on July 26, 1861. The regiment, originally known as the "Ira Harris cavalry," rendezvoused at Camp Scott, Staten island, where it was mustered into the U. S. service from Aug. 15 to Oct 31, 1861. The companies of which it was composed were principally recruited in the counties of New York, Kings, Allegany, Cattaraugus, Wyoming, Tioga, Essex and Greene. A part of Co. D came from Springfield, Mass., and part of Co. I from Princeton, Passaic and Plainfield, N. J. The original members were mustered out by detachments in 1864 and the regiment, composed of veterans and recruits, continued in service until July 19, 1865, when it was mustered out and honorably discharged at Winchester, Va. The regiment left the state, nearly 1,200 strong, Nov. 18, 1861, and was stationed at Annapolis until the spring of 1862. That year it served in the 5th corps, Department of the Shenandoah; in the 2nd corps. Army of Virginia; and in Stahel's division in the defenses of Washington. It started on its first campaign down the Shenandoah Valley in April, 1862, and at Front Royal, Strasburg and Middletown, sustained a loss of 75 killed, wounded and missing. As Gen. Banks fell back before Gen. Jackson, the regiment was cut off at Strasburg, but saved Banks' wagon train and Hampton's battery, and escorted them in safety by a circuitous route through the mountains into Maryland. It lost 24 men at Barnett's ford, and 23 in an action near Orange Court House. In the latter engagement it distinguished itself by driving the 7th Va. cavalry and capturing 47 prisoners, incluring the commanding officer. Maj. Marshall. It took an active part in Gen. Pope's campaign, being selected as body-guard to that general. In 1863 the regiment served in the 3d brigade, 3d division, 22nd corps at Washington; in the ist and 2nd brigades, 3d cavalry division. Army of the Potomac; and was repeatedly in action during the year, its heaviest losses being sustained at Little River turnpike, loss 42; at Hanover, Pa., loss 54; at Hagerstown, loss 91; at Brandy Station, loss 25; and in a second action there, loss 28; at Buckland mills, loss 22. It then served with the cavalry corps. Army of the Potomac, until Oct., 1864; in the Army of the Shenandoah until the opening of the final campaign in 1865; and in the Department of West Virginia from March. 1865. It participated in Kilpatrick's raid to Richmond in the spring of 1864, sustaining considerable loss, Maj. Merritt, being among the captured. It was heavily engaged at the battle of the Wilderness, where it opened the fight at Parker's store, and met with a loss of 63 killed, wounded and missing. Its losses at Spottsylvania Court House were 16; at North Anna 25; at Cold Harbor 43; in the raid to the South Side and Danville railroads in June 98; at Smithfield 19; and at the Opequan 17. The regiment returned home under command of Col. White, with only about 550 men out of a total enrollment of nearly 2,500. It had participated in nearly 175 battles and skirmishes and established a well-earned reputation for gallantry and high soldierly conduct. Its total losses by death were 5 officers and 62 men killed in action; 2 officers and 24 men died of wounds received in action; 4 officers and 222 men died of disease, accident and other causes; a total of 11 officers and 308 men, of whom 99 died in Confederate prisons, a larger loss from this source than was sustained by any other cavalry regiment from the state. Medals of honor were conferred upon three of the regiment by the secretary of war for distinguished gallantry in action, viz.: Sergt. Thomas Burke, for capture of a battleflag at Hanover, Pa.; Sergt. David S. Scofield, for the capture of a flag at Cedar creek, Va. ; and on Corp. John Walsh, for the capture of a flag at the same engagement. 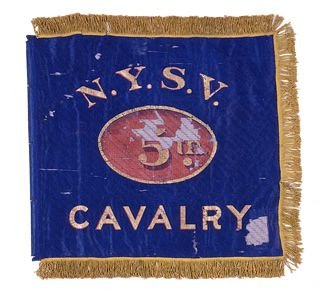 The 5th Regiment Cavalry, or "First Ira Harris Guard," mustered into service for three years during the late summer and fall of 1861. These blue silk… 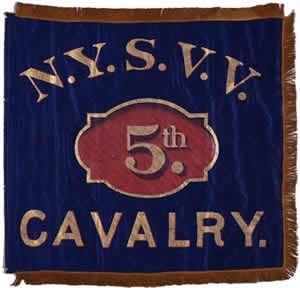 The 5th Regiment Cavalry, or "First Ira Harris Guard," mustered into service for three years during the late summer and fall of 1861. When the term… 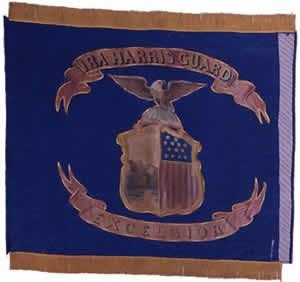 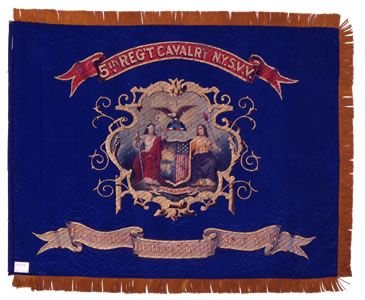 When the 5th Cavalry’s three-year muster expired in late 1864, the regiment continued in service as a “Veteran Volunteers.” This blue silk… 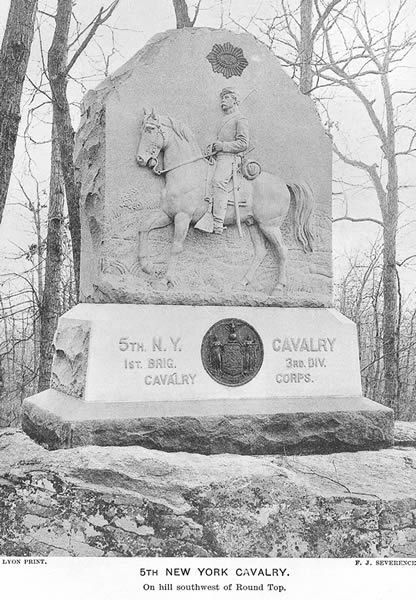 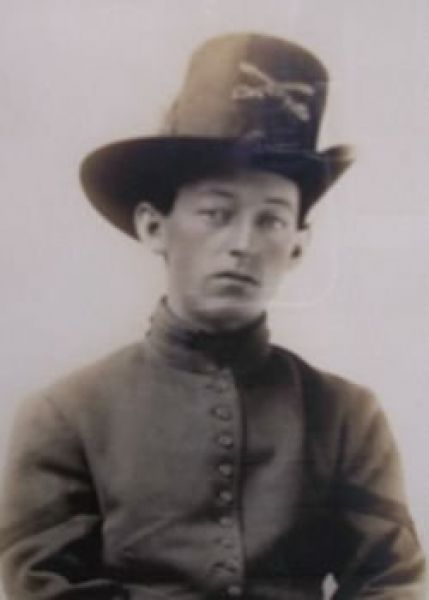 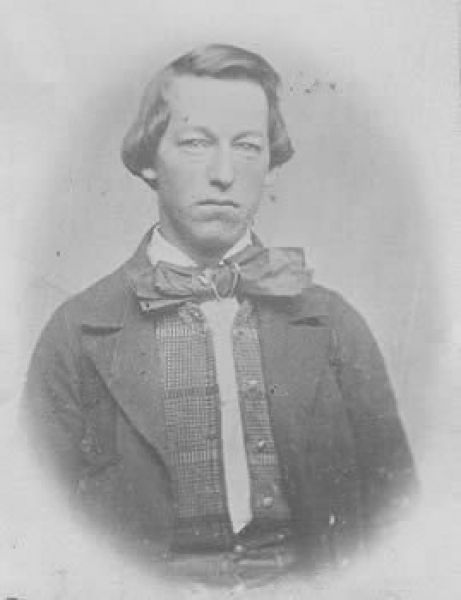 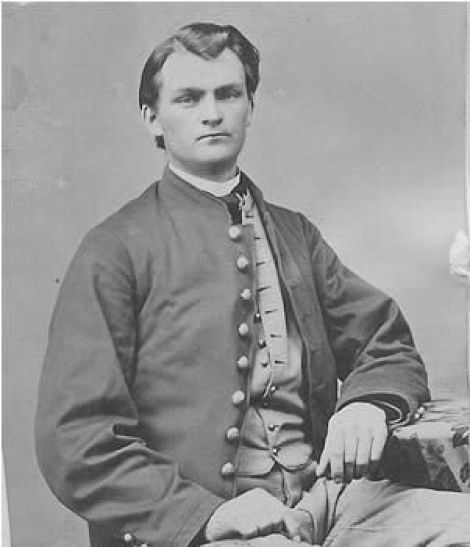 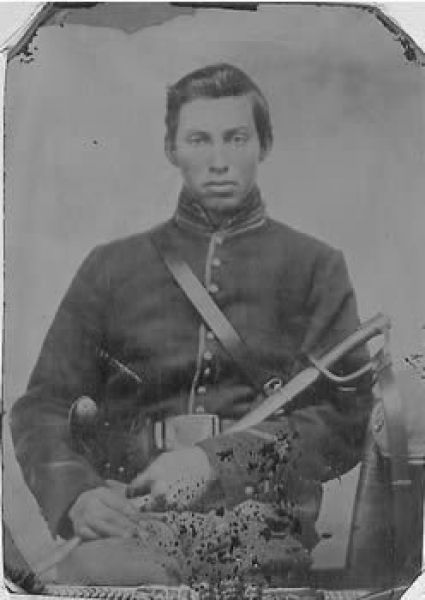 Beaudry, Louis Napoleon. Historic records of the Fifth New York cavalry, First Ira Harris guard, its organization, marches, raids, scouts, engagements, and general services during the rebellion of 1861-1865, with observations of the author by the way, giving sketches of the Armies of the Potomac and of the Shenandoah. Also, interesting accounts of prison life and of the secret service. Complete lists of its officers and men. By Rev. Louis N. Boudry, Chaplain of the Regiment. Albany: S. R. Gray, 1865. xv, [17]- 358 p.
Available online at: www.archive.org/details/historicrecords00beaurich

Beaudry, Louis Napoleon. The Libby Chronicle, devoted to facts and fun, a true copy of the Libby chronicle as written by the prisoners of Libby in 1863. Published by Louis N. Beaudry. Albany: [C. F. Williams print, co., 1889] 46 p.

Unknown. Diary.
This was captured by George W.E. Row. A digital copy was donated by his great-grandson, Patrick Sullivan.

Van Dusen, Charles Theron. Van Dusen Civil War Diary.
A transcription of the diary kept by Charles Theron Van Dusen during the Civil War. The Van Dusens are among the earliest families to have settled in New York City.
Available online through the New York Times:
www.nytimes.com/interactive/2011/07/24/nyregion/20110724-van-dusen-civil-war-diary.html?ref=nyregion
Resource submitted by Patrick Fultz.