After the action at Big Bethel, Va., June 10, 1861, Major General Butler authorized Capt. Judson Kilpatrick, 5th N. Y. Volunteer Infantry, to organize a squadron of cavalry for duty in General Butler's Department. This authority was approved by the Secretary of War and Companies. A and B were accordingly organized at New York City. Later in 1861 Capt. C. C. Dodge received permission from the War Department to raise two more companies to form a battalion, and Companies C and D were accordingly organized at Newburgh with the consent of the State authorities, and Captain Dodge was appointed Major. In the summer of 1862 the Governor of the State authorized Major Dodge to organize sufficient companies to raise the battalion to a regiment and appointed him Colonel of the same, and Companies E, F, G, H, I, K, L and M were accordingly organized at New York City.

The companies were mustered in the service of the United States for three years: at Fort Monroe, Va., A and B, July 30, 1861; at Newburgh C and D September 18 and October 16, 1861, respectively; at. New York City E, F, G and H in June, July and August, 1862; and I, K, L and M in August and September, 1862. July 17, 1864, 270 men of the 16th N. Y. Volunteer Artillery, who had volunteered to serve with the regiment, were transferred to it. At the expiration of their term of service the men of Companies A, B, C and D, entitled thereto, were discharged and the companies continued in the service. July 21, 1865, the regiment, commanded by Col. Edwin V. Sumner, was consolidated at Fredericksburg, Va., into a battalion of seven companies, the men of Company B being transferred to Companies E and G; those of F to A; of H to K; of I to M, and of L to D; leaving in existence Companies A, C, D, E, G, K and M, and the reorganization of the regiment was completed by the transfer of the 3d N. Y. Volunteer Cavalry, consolidated into five companies, as Companies B, F, H, I and L to the same.

September 6, 1865, the regiment received the designation, 4th Provisional Regiment, N. Y. Volunteer Cavalry, and its final record will be found under that head.

First Mounted Rifles.—Cols., Charles C. Dodge, Benjamin F. Onderdonk, Edwin V. Sumner; Lieut.-Cols., Benjamin F. Onderdonk, Alexander G. Patton, James N. Wheelan; Majs., William H. Schiefifelon, Henry Terwilhger, James N. Wheelan, Minott A. Pruyn, Charles C. Dodge, Alexander G. Patton, Edgar A. Hamilton. This regiment from the state at large was organized at New York city. The companies were mustered into the U. S. service for three years as follows: A and B at Fort Monroe, Va.. July 30, 1861 ; C and D at Newburg, Sept. 18 and Oct. 16, 1861; E, F. G and H at New York city, in June. July and Aug., 1862; and I, K, L and M in Aug and Sept., 1862. On July 17, 1864, it received by transfer 270 men of the i6th N. Y. artillery. The original members, except veterans, were mustered out at the expiration of their term of service and ia New York Regiments 301 July, 1865, the regiment was consolidated into a battalion of seven companies, commanded by Col. Sumner; to complete the reorganization of the regiment, it was consolidated with the 3d N. Y. cavalry, which constituted companies B, F, H, I and L of the new organization. The first two companies left the state in July, 1861; C and D in Dec, 1861; E, F, G and H in Aug., 1862; and I, K, L and M in Sept., 1862. It served until 1864 with the 7th and 4th corps, principally at Fortress Monroe, Norfolk, Suffolk, Portsmouth, Williamsburg and Yorktown, Va., taking part in over 50 battles and skirmishes, but sustaining no severe losses, its heaviest casualties being at Scott's mills, Va., in May, 1863, when 28 were killed, wounded and missing. The regiment was ordered to join Wistar's division, i8th corps in Jan., 1864, with which it was engaged at New Kent Court House and Bottom's bridge. During the rest of its active service it was principally with the cavalry division of the Army of the James, one detachment acting as escort at headquarters, and Cos. H and D with the loth corps from June to Aug., 1864. In the operations against Petersburg and Richmond in May, 1864, it sustained a loss of 13, and during the siege was often in action, but met with no large losses, its total casualties amounting to 43 killed, wounded and missing. It was active at the final assault on Petersburg, April 2, and saw its last fighting at Murfree's depot, Somerton and Jackson, N. C. The final record of the regiment will be found under the head of the 4th provisional cavalry. The losses of the regiment during service were 2 officers and 30 men killed and mortally wounded; 3 officers and 125 men died of disease and other causes, a total of 165. (See 7th Cavalry.) 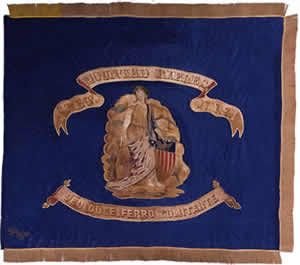 The 1st Mounted Rifles received this presentation flag in October 1862. Embroidered by Tiffany & Co., the flag features the Goddess Columbia with the… 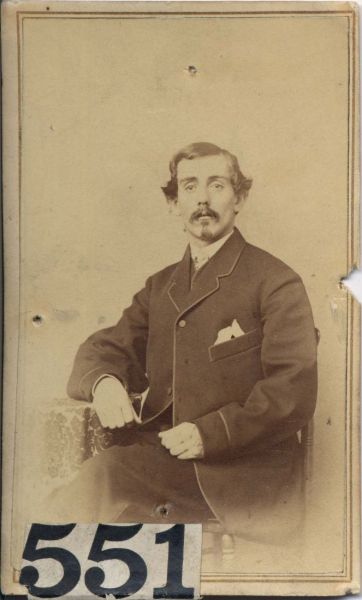 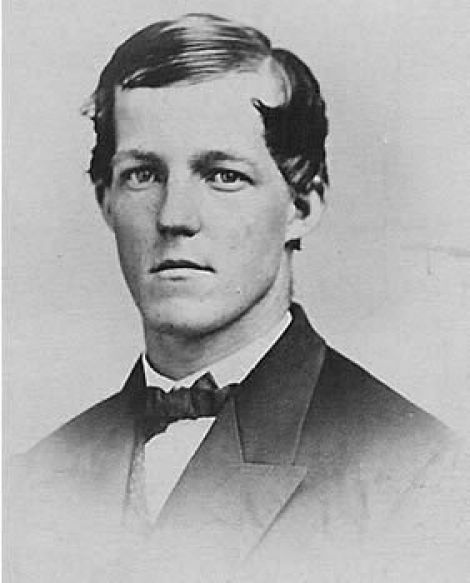 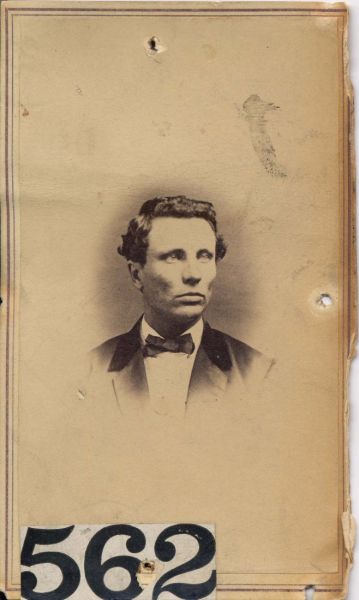 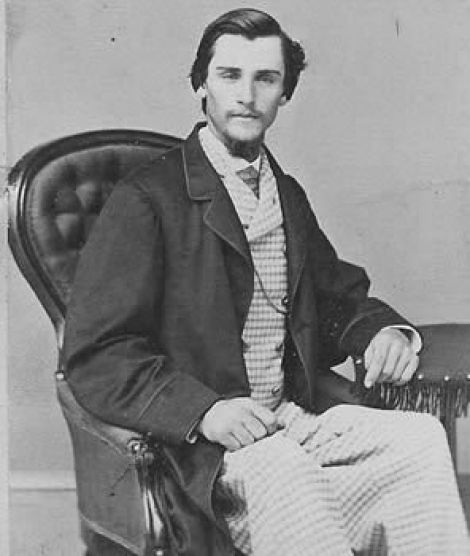 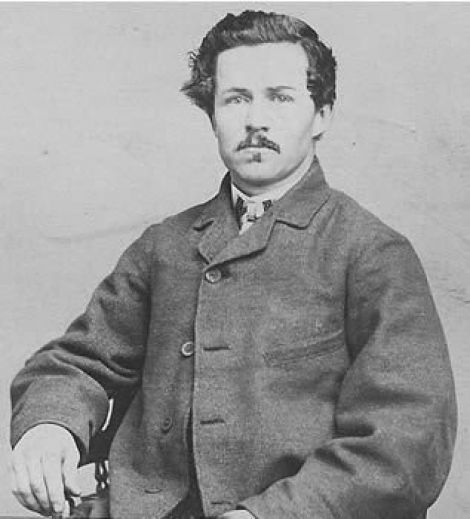 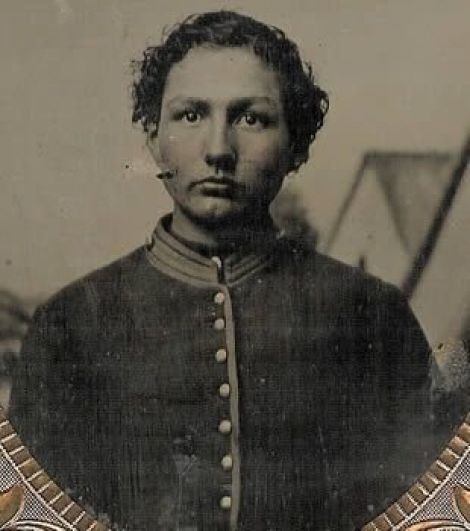 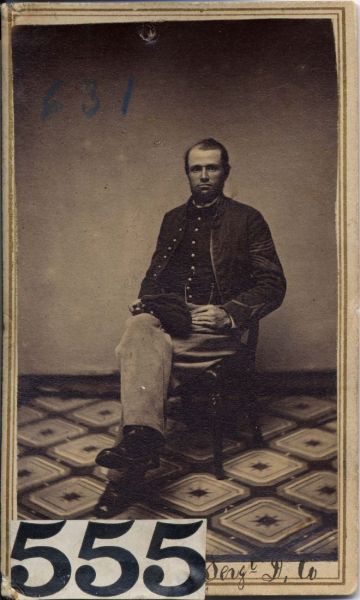 “A floor plan of a room at a camp in Williamsburg, Va., highlighting the locations of a door, a fireplace, two bunks, windows, a box for ordinance, and a writing desk.” University of Michigan: Clements Library. https://quod.lib.umich.edu/cgi/i/image/image-idx?id=S-WCL1IC-X-6851%5DWCL006917.

Cronin, David Edward. The evolution of a life : described in the memoirs of Major Seth Eyland late of the Mounted Rifles. S.W. Green's Son, publisher, 1884.

6 leaves. Photostats (negative).
Letter, 28 June 1863, from Bradney B. Griffin (1843-1872), surgeon in the 1st New York Mounted Rifles, to an unknown correspondent describing efforts by the unit stationed at South Mills, North Carolina, to recapture 80 Confederate officers who had escaped while on their way to Fort Delaware. Also includes details about the residents and economic conditions of the area.
Accession 21737. Located at the Library of Virginia in Richmond, Virginia.
Thank you to Ed Worman for pointing out this resource.

New York (State). Adjutant General's Office. A record of the commissioned officers, non-commissioned officers, and privates, of the regiments which were organized in the state of New York and called into the service of the United States to assist in suppressing the rebellion, caused by the secession of some of the Southern states from the Union, A.D. 1861, as taken from the muster-in rolls on file in the Adjutant-General's Office, S.N.Y. Comstock & Cassidy, Printers, 1864-1868.

New York (State). Adjutant General's Office. Registers of the New York regiments in the War of the Rebellion. J.B. Lyon, 1894-1906.

Tolmon, C. L. “Numerous dots surrounding the signature at the end of a letter.” University of Michigan: Clements Library. https://quod.lib.umich.edu/cgi/i/image/image-idx?id=S-WCL1IC-X-6853%5DWCL006919.

Van Vechten, Henry C. At the siege of Suffolk. In National tribune scrapbook I 83.

Items in bold are in the museum's collections.