Colonel John C. Lemmon received August 3, 1861, authority from the War Department to recruit this regiment. In September, 1861, it was turned over to the State authorities and recruiting continued by them. It was organized at Elmira, and a number of the men enlisted for the Morgan Cavalry, then disbanded, joined it. It received its numerical designation, December 12, 1861, and its companies were mustered in the service of the United States for three years, A at Syracuse, September 27, 1861, B, C, D, E, F, G and H at Elmira, December 28, 1861, I, K and L at Elmira, October 30 and 29, 1862, and M in November and December, 1862, and January, 1863. Companies I, K and L joined the regiment December 5, 1862, and Company M in February, 1863, completing- the regimental organization. At the expiration of the term of service of the first eight companies, the men entitled thereto were discharged, and the regiment continued in the service.

Tenth Cavalry,—Cols., John C. Lemmon, William Irvine, Mathew H. Avery; Lieut. -Cols., William Irvine, M. H. Avery, Frederick L. Tremain, Benjamin F. Sceva; Majs., M. H. Avery, George W. Kennedy, James M. Reynolds, John H. Kemper, Theodore H. Weed, Martin H. Blynn, Alva D. Waters, William A. Snyder. This regiment, known also as the Porter Guard, is enumerated by Col. Fox as one of the three hundred fighting regiments of the war. It was organized at Elmira during the fall of 1861, from companies recruited in the counties of Chemung, Chenango, Cortland, Erie, Fulton, Onondaga and Steuben. Cos. A, B, C, D, E, F. G and H were mustered into the U. S. service from Sept. 27 to Dec. 28, 1861, for three years; I, K and L were mustered in at Elmira on Oct. 29-30, 1862, and M in Nov. and Dec, 1862. Cos. I, K and L joined the regiment on Dec. 5, 1862, and M in Feb., 1863, completing the regimental organization. At the expiration of their term of service in the fall of 1864, the original members of the first eight companies, except veterans and recruits, were mustered out, and the regiment was retained in service until July 10, 1865, when it was consolidated with the 24th N. Y. cavalry, the consolidated force being designated as the 1st provisional regiment N. Y. cavalry. The first eight companies left the state on Dec. 24, 1861, and were stationed at Gettysburg during the remainder of the winter. In the spring and summer of 1862, it did railroad guard duty and served in the defenses of Washington, where it was mounted. It saw its first active service in the Manassas campaign of 1862, and was in Bayard's brigade at Fredericksburg. It participated in the Stoneman raid at the time of the Chancellorsville campaign, with the 1st brigade, 3d cavalry division. On June 14, 1863, it was assigned to the 3d brigade, 2nd division (Gen. D. McM. Gregg's), in which it served until the close of the war. Gen. Crook commanding the division in the final campaign of 1865. Its brigade commanders were Gens. J. I. Gregg and H. E. Davies, Jr. The regiment encountered its hardest fighting at Brandy Station in June, 1863, where it lost 6 killed, 18 wounded and 61 missing. At Middleburg its loss was 30; at Sulphur Springs, Auburn, Bristoe and Catlett's station in October, 53; at Haw's shop and Hanoverton, 42; at Trevilian Station, 21; at St. Mary's Church, 22; and at Boydton road, 17. In the final Appomattox campaign its losses aggregated 72 killed, wounded and missing. Lieut.-Col. Tremain, a brilliant young officer, died of wounds received at Hatcher's run. The following extract from the muster-out rolls of the regiment shows the sort of stuff of which the regiment was made: "Lieut. William J. Rabb (Co. D); killed at Brandy Station, by a saber-thrust through the body while lying under his horse; he would not surrender." Corp. Andrew Bringle, Corp. James L. Cary, Capt. N. D. Preston, and Sergt. Llewellyn P. Norton, were awarded medals of honor for gallantry in action by the secretary of war. The regiment lost while in service 9 ofificers and 97 men killed or died of wounds; i officer and 151 men died of disease, accident, in prison, etc., a total of 258, out of an enrollment of 2,029 ofificers and men. Among its important engagements were Leesburg, Beverly ford, Middleburg, Gettysburg, Shepherdstown, Sulphur Springs, Auburn, Bristoe Station, Morrisville, Todd's tavern, near Richmond, Haw's shop, Trevilian Station, King and Queen Court House, St. Mary's Church, Deep Bottom, Lee's mill. Reams' station. Poplar Spring Church, Boydton road. Prince George Court House, Disputanta Station, Stony Creek Station, Hatcher's run, Dinwiddie Court House, Sailor's creek and Farmville. Eleventh Cavalry.— 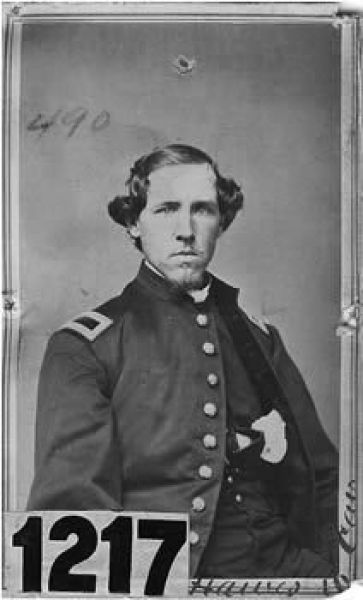 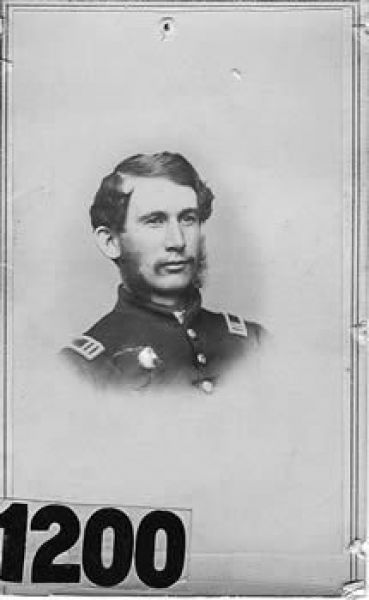 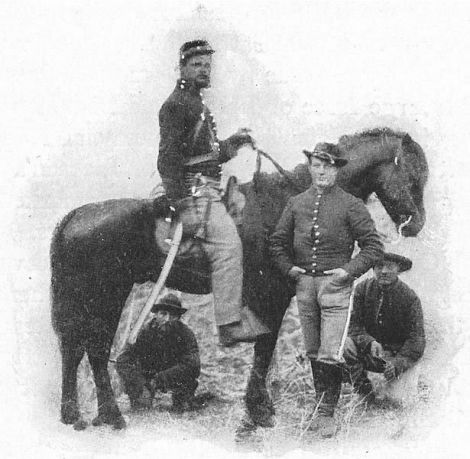 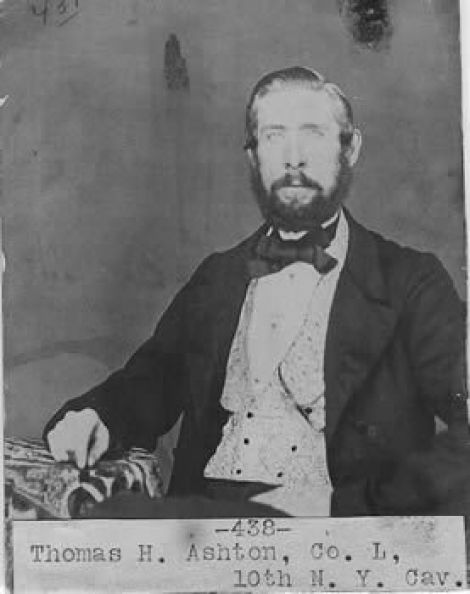 Coddington, Ronald S. Faces of the Civil War: An Album of Union Soldiers and Their Stories. Johns Hopkins University Press, 2004.

4 pages.
Letter, 29 November 1862, from William N. Harrison (b. ca. 1837), 10th New York Cavalry Regiment, being held at Camp Parole in Annapolis, Maryland, to his cousin Frank W. Gaylord (ca. 1832-1867) of Moreland, Schuyler County, New York. Harrison describes how he was captured near Fredericksburg, Virginia and taken to Richmond for six days before being paroled, the conditions he has been enduring, and the scarcity and prices of goods in Richmond. Also included is a transcription of the letter.
Accession 40494.
Located at the Library of Virginia in Richmond, Virginia.
Thank you to Ed Worman for pointing out this resource.

"How We Took Them." New York State Military Museum. http://catalog.nysmm.org/Presto/content/Detail.aspx?ctID=MWUzZjNjOGQtZjA1My00MDA3LTk0ZDMtN2E5ZmNkZWM1ZWUw&rID=MTE1NDQ=&qrs=RmFsc2U=&q=KENhdGFsb2cuQ29uZmxpY3Q6KDE4NjUpKSBBTkQgKENhdGFsb2cuTWlsQ29tcG9uZXQ6KFVuaXRlZCBTdGF0ZXMuIEFybXkuIE5ldyBZb3JrIENhdmFscnkgUmVnaW1lbnQsIDEwdGgpKQ==&qcf=MWUzZjNjOGQtZjA1My00MDA3LTk0ZDMtN2E5ZmNkZWM1ZWUw&ph=VHJ1ZQ==&bckToL=VHJ1ZQ==&rrtc=VHJ1ZQ==.

Kempster, Walter. "The cavalry at Cedar creek, remarks on Anson's paper, written by the unanimous request of the Commandery." MOLLUS-Wis IV 369-75.

Kempster, Walter. "The early days of our cavalry, in the Army of the Potomac." MOLLUS-Wis III 60-89.

Kempster, Walter. "The volunteer soldier in relation to the progress of civilization. MOLLUS-Wis I 72-84.

Matteson, Ronald G. Justus in the Civil War: A true story of the lives of two young people caught up in the trials and perils of the Civil War. Walworth, NY, 1995.

Preston, Noble D. A brief sketch of the life of Noble D. Preston. 1895. Manuscript available as microfilm at the New York Public Library.

Preston, Noble D. “Map showing the positions occupied by the Tenth New York Cavalry in the cavalry engagements on the right flank at Gettysburg, Penn. : on July 2 & 3, 1863, between the Union cavalry under Gen. D. McM. Gregg and the Confederate cavalry under Gen. J.E.B. Stuart.” Library of Congress. https://www.loc.gov/resource/g3824gm.gcw0346000/.

Preston, Noble D. “Route of the Tenth New York Cavalry from Culpeper to Gettysburg and return. Summer and fall campaigns of 1863.” Library of Congress. https://www.loc.gov/resource/g3881s.cw0046000/.

Reed, I. Richard. 100 Years Ago Today: Niagra County in the Civil War as Reported in the Pages of the Niagra Falls Gazette. Niagra County Historical Society, 1966.

Re-Union and Twenty-Fifth Anniversary of the muster into the United States Service of the Tenth New York Cavalry at Syracuse, N.Y., December 15, 1886. N. D Printers, 1886.

Story, Asa J. “10th New York Cavalry, Co. G. Papers (1833-1871).” New York State Library. http://www.nysl.nysed.gov/mssc/allcwrec.htm#260. From the website: “These papers include a pocket diary kept by Story from December 1861 through February 1863 regarding his experiences in the military. In it he notes that a considerable amount of friction existed in the ranks of the 10th Cavalry.”

Wynkoop, Guy. “10th New York Cavalry, Co. H. Letters (1862-1863).” New York State Library. http://www.nysl.nysed.gov/mssc/allcwrec.htm#325. From the Website: “The letters, sent to his wife, describe life in camp and the action he witnessed at the battle of Brandy Station.”