The following is taken from New York in the War of the Rebellion, 13th ed. Frederick Phisterer. Albany: J. B. Lyon Company, 1912.

It was proposed to recruit a battalion of artillery for E. D. Baker's Brigade; and Capt. Emil Sturmfels received authority from the War Department, August 2, 1861, to recruit this battalion. The recruiting of a battalion was discontinued and the enlisted men were all united in Company A—'this battery — which was organized and recruited in New York city, and there mustered in the service of the United States for three years October 15, 1861. At the expiration of its term of service, the men entitled thereto were discharged and the battery continued in the service. It left the State October 17, 1861; was turned over to the State and received its numerical designation in December, 1861; served in Col. E. D. Baker's 3d Brigade, Stone's Division, Army of the Potomac, from October 18, 1861; at and near Washington, D. C., from December 21, 1861; in Blenker's Division, Army of the Potomac, from February 13, 1862; in 2d Brigade, same division,

Mountain Department, from April, 1862; in Reserve Artillery, 1st Corps, Army of Virginia, from June, 1862; in 1st Division, nth Corps, Army of the Potomac, from September, 1862; in Artillery Brigade, nth Corps, from May, 1863; in 3d Division, 11th Corps, from January, 1864; in 2d Division, 20th Corps, from April, 1864; and in the district of Tennessee, Department of Cumberland, from September, 1864. Commanded by Capt. Henry Bundy, the battery was honorably discharged and mustered out July 28, 1865, in New York city, having, during its service, lost by death, killed in action, 1 officer, 5 enlisted men; of wounds received in action, 7 enlisted men; of disease and other causes, 16 enlisted men; total, I officer, 28 enlisted men; aggregate, 29; of whom 1 enlisted man died in the hands of the enemy.

Thirteenth Independent Battery.—Capts., Emil Stumpfels, Julius Dieckman, William Wheeler, Henry Bundy. This battery was recruited in the late summer of 1861 at New York city, as part of a battalion of artillery for E. D. Baker's brigade. Recruiting for the battalion was discontinued and all the men enlisted were united in Co. A, which was designated by the state as above in Dec, 1861. It was mustered into the U. S. service for three years, at New York city, Oct. 15, 1861, and left the state two days later. Upon the expiration of its term, the men reenlisted at Bridgeport, Ala., Jan. I, 1864, and the battery continued in service as a veteran organization. It served in the Army of the Potomac until April, 1862, when it was ordered to the Mountain Department, under Gen. Fremont, and was active at the Rappahannock river. It was then assigned to the reserve artillery, 1st corps, and was engaged in June at Cross Keys and White House ford; took part in Pope's Virginia campaign, culminating in the battles around Manassas, its loss in this campaign being 1 killed and 12 wounded; was then withdrawn from the front for a few months, and attached to the artillery brigade of the nth corps. It was actively engaged at Chancellorsville and Gettysburg, losing 15 killed, wounded and missing in the former battle, and 11 in the latter. On Sept. 24, 1863, it moved with the nth corps to Tennessee and formed part of the forces that drove the enemy from the vicinity of Chattanooga, being engaged in Lookout valley and in the battle of Missionary ridge, after which it accompanied the troops sent to the relief of Knoxville. In April, 1864, when the nth and 12th corps were united to form the 20th corps, it was assigned to the 2nd division of the new corps, and took part in all the principal engagements of the corps from Chattanooga to Atlanta, including Resaca, Dallas, Kennesaw Mountain, Peachtree creek and the siege of Atlanta. It suffered severe losses and its ranks were twice filled by details of infantry. After the fall of Atlanta, these details were returned to their regiments and the battery was left with an effective strength of only 86 men. It was ordered to garrison duty in the Department of the Cumberland in September, and fought its last engagement at Overall's creek, Tenn., in Dec, 1864. The battery was mustered out at New York city, under command of Capt. Bundy, July 28, 1865, having lost during its term of service i officer and 13 men killed and died of wounds; 16 men died of disease and other causes, a total of 29. 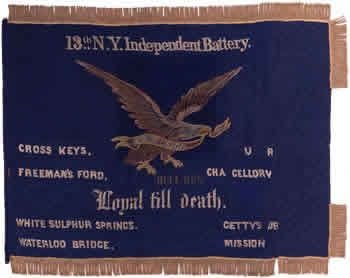 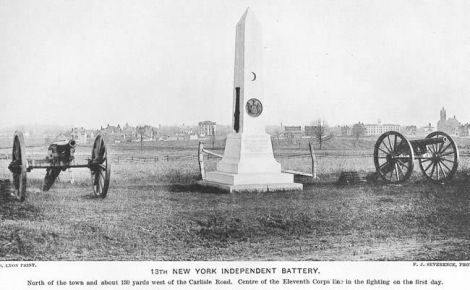 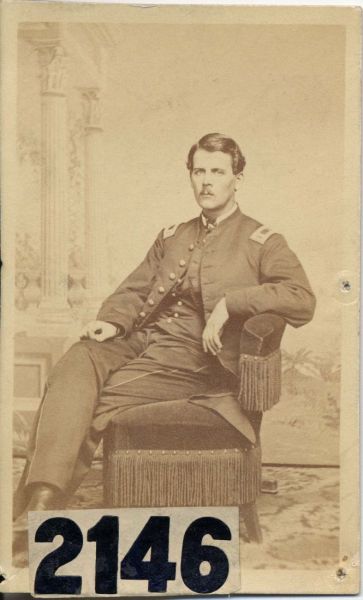