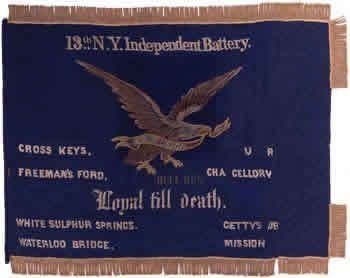 New York State Adjutant General William Irvine received the 13th Independent Battery’s flag and deposited it within the NYS Battle Flag Collection on August 24, 1865. Both embroidered and painted battle honors decorate this two-sided, silk flag. In 1972, restorers removed the staff sleeve and fringe and then added the netting. When they reassembled the flag, they put the staff sleeve on backwards. A small area of a painted battle honor from the back now appears on the front.