In spring, 1864, Col. George W. Von Schack, under his former authority, again commenced the formation of a regiment, under the above title, and the organization took place at Hart's island, New York harbor. The companies were mustered in the United States service for three years; A, B, C, D and E March 29, May I, June 4, July 15 and August 9, 1864, respectively; for one, two and three years, Company F, September I, 1864; for one and three years, Company G, September 17, 1864; and for one year, Companies H, I and K, October 13, 22 and 31, 1864, respectively. The three years' men of the original 7th Regiment, serving with the 52d Infantry, were assigned to Companies A, B, C and D of this regiment, July 22,, 1864. The companies were recruited principally: A and C at Brooklyn and New York city; B at Brooklyn, New York city and Albany; and the other companies in New York city, Brooklyn, Jamaica, Tarrytown, Albany, Poughkeepsie, Goshen, Schenectady, Kingston and Troy.
The regiment left the State in detachments, the first, Company A, in April, 1864; the companies, as they arrived, were attached to the 52d Infantry, and served as part of this regiment until July 22, 1864, when it appears on the records as a distinct organization. The regiment served in the 3d, and for a time in the Consolidated Brigade, 1st Division, 2d Corps, Army of the Potomac, and was honorably discharged and mustered out, under the command of Colonel Von Schack, August 4, 1865, at Hart's island, New York harbor.
During its service it lost by death, killed in action, 2 officers, 29 enlisted men; of wounds received in action, 1 officer, 18 enlisted men; of disease and other causes, 53 enlisted men; total, 3 officers, 100 enlisted men; aggregate, 103; of whom 9 died in the hands of the enemy.

Seventh Veteran Infantry.—Col. George W. Von Schack was authorized on May 6, 1863, to reorganize the 7th regiment and it was again mustered into the U. S. service early in the spring of 1864. For a time before the regimental organization was. complete several companies were attached to the 52nd N. Y., a notable fighting regiment. It was assigned to the 3d brigade, 1st division, 2nd corps and joined the Army of the Potomac before the Wilderness campaign in which it participated through all the weeks of constant fighting leading up to Petersburg. During the siege of Petersburg it saw. much active service, being engaged in the assaults at Petersburg in June, at the Weldon railroad, Deep Bottom, Strawberry plains, Reams' station, Hatcher's run, Fort Stedman, White Oak road, the final assault and the closing battles of the pursuit. The regiment was mustered out at Hart's island, N. Y., Aug. 4, 1865, having lost 50 members by death from wounds, and 53 by death from other causes. 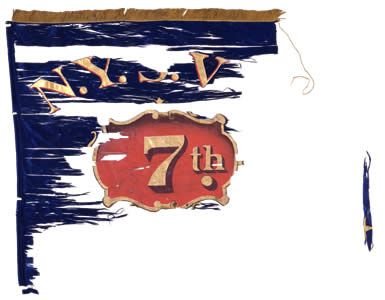 The 7th Regiment NY Veteran Volunteer Infantry mustered into service between March and October 1864. This pair of blue silk flank markers have…