The following is taken from New York in the War of the Rebellion, 3rd ed. Frederick Phisterer. Albany: J. B. Lyon Company, 1912.
Colonel Cleveland Winslow received, May 25, 1863, authority to reorganize his former regiment, the Fifth, for three years' service. October 14, 1863, the men recruited for the 31st and 37th Regiments of Veteran Infantry, reorganizing under Cols. Frank Jones and Wm. DeLacy, respectively, were transferred to this regiment, and the men so far recruited organized into a battalion of four companies, A, B, C and D. June 2, 1864, the battalion of the 12th Infantry, two companies, still in the field, and the members of the 84th Infantry, not discharged at the expiration of its term of service, were transferred to this battalion, Companies D and E of the 12th forming F and E, respectively. and the men of the 84th Regiment, Companies G, H, I and K of the completed regimental organization. May 31, June 3 and 7, 1865, the enlisted men of the 140th, 185th and 189th Infantry not mustered out with their respective regiments, joined this by transfer. The original four companies were recruited in New York City and there mustered in the service of the United States for three years.
The battalion left the State, Companies A, Band C, October 26, and Company D, October 27, 1863; and served at and near Washington, D. C, in 22d Corps, from November, 1863; in the 1st Brigade, 1st Division, 5th Corps, Army of the Potomac, from May 31, 1864; the regiment in the 1st Brigade, 2d Division, 5th Corps, from June 6, 1864; Companies F and E as Provost Guard of the 5th Corps, until March, 1865. Commanded by Co1. Wm. F. Drum, the regiment was honorably discharged and mustered out, August 21, 1865, at Hart's island, New York harbor.
During its service it lost by death, killed in action, 7 officers, 49 enlisted men; of wounds received in action, 4 officers, 24 enlisted men; of disease and other causes, 86 enlisted men; total, 11 officers, 159 enlisted men; aggregate, 170 ; of whom 57 enlisted men died in the hands of the enemy.

The following is taken from The Union army: a history of military affairs in the loyal states, 1861-65 -- records of the regiments in the Union army -- cyclopedia of battles -- memoirs of commanders and soldiers. Madison, WI: Federal Pub. Co., 1908.
Fifth Veteran Infantry.—Col. Winslow received authority to reorganize the 5th for three years' service and with the recruits enlisted for the 31st and 37th veteran infantry, a battalion of four companies—the veteran 5th left New York Oct. 26, 1863, and was assigned to the defenses of Washington, where it remained until May 31, 1864. It was then assigned to the 1st brigade, 1st division, 5th corps, Army of the Potomac, and received at different times, the veterans and recruits of the 12th, 84th, 140th, 185th and 189th N. Y. The regiment participated in the battle of Cold Harbor; lost at Bethesda Church 87 killed, wounded and missing; proceeded with the 5th corps to Petersburg; was in an encounter at the Weldon railroad in August and lost 119 men; was also active at Poplar Spring Church, Hatcher's run, White Oak road, where the loss was 60 killed, wounded and missing; and shared in the final assault on Petersburg and the battle of Five Forks. Routine duties were performed by the regiment for some weeks and on Aug. 21, 1865, it was mustered out at Hart's island, N. Y. Harbor. The total strength of the 5th veteran regiment was 1,138 and it lost by death from wounds 99 members, and 90 died from other causes. 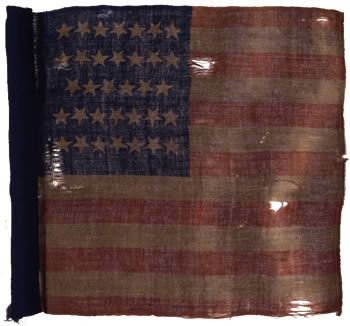 Two 34-star printed wool camp colors in the US national pattern as prescribed in General order No. 4, Headquarters of the U.S. Army, dated 18 January… 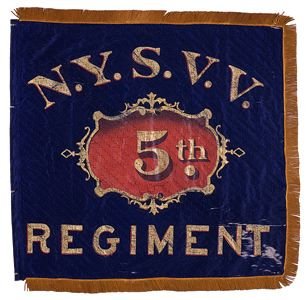 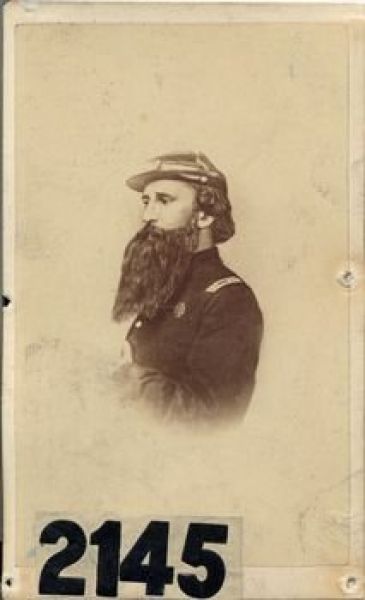 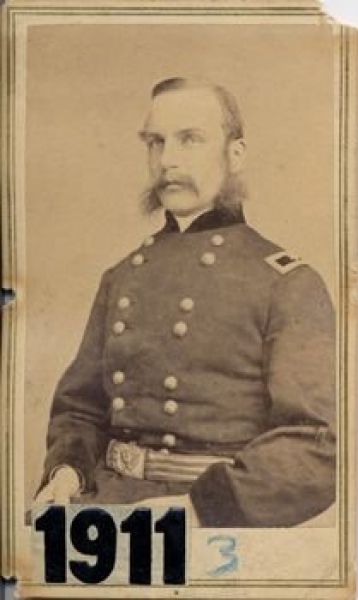 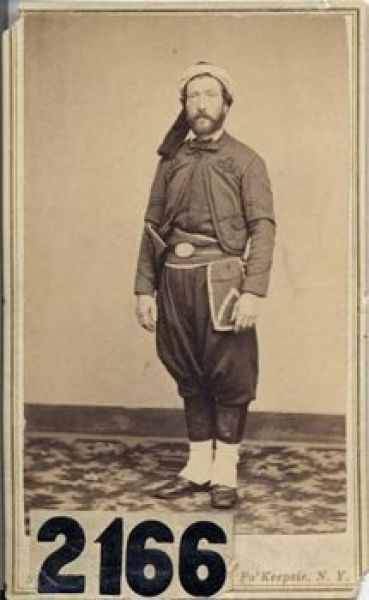 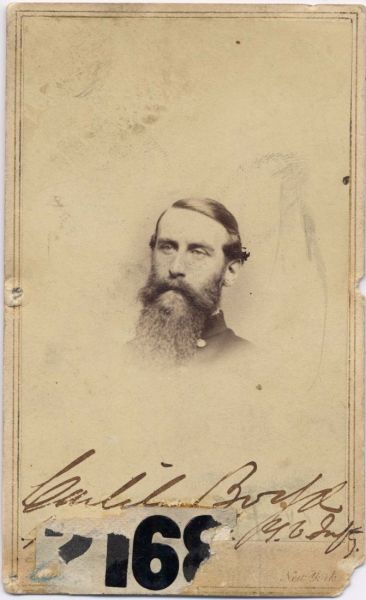 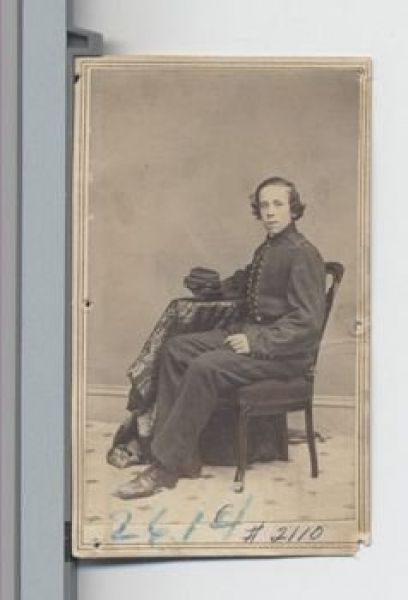 Schroeder, Patrick A. We came to fight : the history of the 5th New York veteran volunteer infantry: Duryee's Zouaves (1863-1865). Patrick A. Schroeder Publications, 1998.

Winthrop, family; Schambert, Daniel; Smith, Mary T.; Winthrop, Charles Francis; Winthrop, Eugene; Winthrop, Francis Bayard; Winthrop, Frederick; Winthrop, Grenville; Winthrop, James; Winthrop, John; Winthrop, Margaret Tyndal; Winthrop, Robert C.; Winthrop, Robert Dudley; Winthrop, Thomas Charles. Papers II, 1578-1977, bulk: 1817-1910.
Abstract: Papers of Winthrop family members, mostly from the 19th c., but including some earlier items of John and Margaret Winthrop, John Winthrop, F.R.S., and an estate inventory of James Winthrop; and some 20th c. items, mostly genealogical notes. The bulk of the collection is personal papers of the descendants of Francis B. Winthrop, including his will and estate inventory (1817); a will (1834) of a Mary T. Smith; and correspondence among family members Thomas C., Charles F., Grenville, Eugene, their cousins Robert C. Winthrop Sr. and Jr., Robert D. Winthrop, and others. Letters (1868-74) of Eugene Winthrop from Paris include descriptions of social life there and the effects of the Franco-Prussian War. There is much genealogical information on the Winthrop family, with a few notes on the Taylor family as well. Also, a series of Civil War letters from Frederick Winthrop, describing his activities with the 12th U.S. Infantry and the 5th N.Y. Volunteers in the battles of Fair Oaks and Spotsylvania, and the campaigns of North Anna River, Totopotomoy Creek, Cold Harbor, Petersburg, and Sherman's March to the Sea. A letter written by a Daniel Schambert describes the Battle of Ball's Bluff.
Located at the Massachusetts Historical Society.

Winthrop, Frederic; Ayres, R. B.; Campbell, James R.; Leatz, Arel; Winthrop, Grenville; Winthrop, Robert. Papers, 1861-1867
Abstract: Civil war papers of Frederic Winthrop, including seven letters from the field to his brothers Grenville and Robert Winthrop, 1862-65. Winthrop served in Virginia with the 12th New York Volunteer Infantry (1861-64); as chief of staff to Gen. R.B. Ayers of the 1st Brigade, 2nd Division, 5th Corps of the Army of the Potomac (1864); and as commander of the 5th New York Volunteer Veterans, known as Duryee's Zouaves (1864-65). Topics include picket duty, work on roads and bridges, and the Peninsular Campaign (1862). The papers also contain official reports and papers, including an account of the Battle of Hatcher's Run (Feb. 1865); letters, telegrams, etc, (1865-67) to Grenville Winthrop and others upon Winthrop's death at the Battle of Five Forks on 1 Apr. 1865, including accounts of the battle, testimonials, news of the transfer of Winthrop's body, biographical sketches, and poems on Winthrop's death. Correspondents include James R. Campbell, Arel Leatz, and R.B. Ayres.
Located at the Massachusetts Historical Society.