This regiment, Col. Adolph von Steinwehr, was accepted by the State May 21, 1861; it was organized in New York city, and there mustered in the service of the United States for two years June 4 and 6, 1861. It was composed of Germans, recruited principally in New York city, but Company K contained a number of men enrolled at Philadelphia, Pa. At the battle of Bull Run, Va., July 21, 1861, the guns of the former Varian's Battery were served by a detachment principally from this regiment, and mostly of Company H; these men were later, when the 2d Battery was organized, transferred to the same. In June, 1863, the three years' men of the regiment were formed into a company, which was known as the Independent Company, 29th Infantry, and performed provost guard duty at the headquarters of the nth Corps, until April 19, 1864, when it was discontinued and the men transferred to the 68th Infantry.
The regiment left the State June 21, 1861; served at and near Washington, D. C, from June 23, 1861; in the 1st Brigade, 5th Division, Army of Northeastern Virginia, from July 16, 1861; in Blenker's Brigade, Division of Potomac, from August 4, 1861; in Stein-wehr's Brigade, same division, Army of the Potomac, from October 15, 1861; in 2d Brigade, same division, Mountain Department, from April, 1862; in 1st Brigade, 2d Division, 1st Corps, Army of Virginia, from June 26, 1862; in 1st Brigade, 2d Division, nth Corps, Army of the Potomac, from September 12, 1862; and was honorably discharged and mustered out under Col. Louis Hartmann, June 20, 1863, at New York city.
During its service, the regiment lost by death, killed in action, 1 officer, 27 enlisted men; of wounds received in action, 1 officer, 14 enlisted men; of disease and other causes, 1 officer, 22 enlisted men; total, 3 officers, 63 enlisted men.

Twenty-ninth Infantry.—Cols., Adolph Von Steinwehr, Clemens Sorst, Lewis Hartmann; Lieut.-Cols., Clemens Sorst, Lewis Hart-mann, Alexander Von Schluembach; Majs., Louis Livingston, William P. Wainwright, Lewis Hartmann, Ulrich Gullmann, Alexander Von Schluembach, Daniel Metzger. The 29th, the "Astor Rifles," was recruited in New York city and there mustered into the U. S. service on June 4 and 6, 1861, for a two years' term, most of its members being of German nativity. On June 21, it left the state for Washington, where it occupied Camp Dorsheimer until July 9, when it moved to Arlington Heights. It was assigned to Blen-ker's brigade and was present in the reserve at the first battle of Bull Run, returning after the action to Washington. One company of the regiment was detached to take charge of the guns of Capt. Varian's battery and was afterward organized as the 1st independent N. Y. battery. From July 26 to Oct. 13, the regiment was stationed at Roach's mills and after several camps of a few days each it established winter quarters at Hunter's Chapel, where it arrived on Nov. 16. During its service here it was assigned to Steinwehr's brigade, which in April, 1862, was ordered to join the Mountain Department and after weeks of marching, participated in the battle of Cross Keys. It was with the 1st brigade, 2nd division, 1st corps, Army of Virginia, from June 26, and was present through the ensuing campaign, being engaged at Sulphur Springs, and losing 20 killed, 95 wounded and 17 missing at the second battle of Bull Run. From the middle of September to December the command encamped at Germantown. It then moved to Falmouth, where it was quartered until February, when permanent quarters were established at Stafford Court House. From September, 1862, it served with the 1st brigade, 2nd division, nth corps, and in April, 1863, was ordered to protect the passage of the Rappahannock, at the opening of the Chancellorsville campaign. In the battle of Chancellorsville it lost 96 killed, wounded or missing, then returned to camp at Stafford Court House, and on June 2, left for New York city, where it was mustered out on the 23d. The total strength of the regiment was 902 members, of whom 42 were killed or died of wounds, and 22 died from accident, imprisonment or disease. 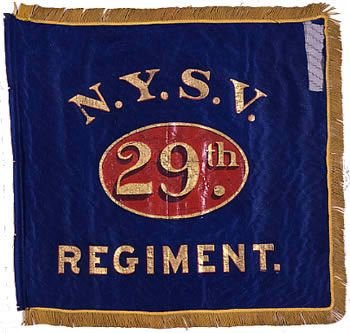 The 29th Regiment, or “Astor Rifles,” or “First German Infantry,” mustered into service for two years on June 4 and June 6, 1861. The NYS Battle Flag…