At the conclusion of the regiment's service in 1861, many members volunteered for further service forming the 12th militia which was later consolidated with the 12th infantry. The publications of the two regiments have not been separated.
This regiment, Col. Ezra L. Walrath, was organized at Elmira; accepted by the State for a service of two years and numbered May 8, 1861; mustered in the service of the United States, at Elmira, for three months, May 13, 1861. At the request of the general government, it was ordered by the Governor of the State, August 2, 1861, to be mustered in the United States service for the unexpired period of its term of State service. February 3, 1862, it was consolidated into five companies, A, G, H, I and K; Company B being merged into H; C into K; D into I and K; E into A; F into H. The nucleus of this regiment was of members of the 51st Regiment, State Militia, and the companies were recruited principally: A, B, C, E, H and I at Syracuse; D at Homer; F at Liverpool; G at Canastota; and K at Batavia. The regiment left the State May 29, 1861.
Colonel Henry A. Weeks received, on the return of the 12th Militia from its three months' service, authority to reorganize it for a service of three years. While the regiment as a body did not re-enter the service, a majority of the officers and enlisted men of the new organization, which was named — 12th Militia — were from the original regiment. The men were recruited principally in New York city, Patchogue and Buffalo, and mustered in the service of the United States for three years in October, November and December, 1861, and January, 1862. In January, 1862, Company A was transferred to the load N. Y. Volunteers, and the seven remaining companies of the regiment consolidated into five, B, C, D, E and F; Company G being merged into Company B, and K into E. These five companies left the State February 5, 1862.
February 8, 1862, the companies of the 12th Militia joined the battalion of five companies of the 12th N. Y. Volunteers, and completed the regimental reorganization of the latter, all the companies retaining their alphabetical designation. May 1, 1863, the two years' men were returned to Elmira and there honorably discharged and mustered out May 17, 1863; the three years' men were consolidated into a battalion of two companies, D and F, and this battalion, commanded by Maj. Henry W. Ryder, was, June 2, 1864, transferred to the 5th Veteran N. Y. Volunteers, as Companies F and E, respectively, of the latter.
The regiment served at Washington, D. C, from May 31, 1861; in the 4th Brigade, 1st Division, Army of Northeastern Virginia, from July, 1861; in Richardson's Brigade, Division Potomac, from August 4, 1861; in Wadsworth's Brigade, McDowell's Division, Army of the Potomac, from October 15, 1861; in Butterfield's Brigade, Porter's Division, 3d Corps, Army of the Potomac, from March 13, 1862; in the 3d Brigade, 1st Division, 5th Corps, Army of the Potomac, from May, 1862; the battalion as Provost Guard, 5th Corps-, from May, 1863. During its service the regiment lost by death, killed in action, 3 officers, 44 enlisted men; of wounds received in action, 22 enlisted men; of disease and other causes, 1 officer, 67 enlisted men; total, 4 officers, 133 enlisted men; aggregate, 137; of whom 4 enlisted died in the hands of the enemy.

Twelfth Infantry.—Cols., Ezra L. Walrath, George W. Snyder, Henry A. Weeks, Benjamin A. Willis; Lieut.-Cols., James L. Graham, Robert M. Richardson, Augustus J. Root, William A. Olmstead; Majs., John Lewis, Henry A. Barnum, Augustus J. Root, Henry W. Ryder. The 12th, the "Onondaga regiment," six companies of which were recruited at Syracuse, and the others at Liverpool, Homer, Ba-tavia and Canastota, was mustered into the U. S. service for a three months' term at Elmira, May 13, 1861. It left for Washington on the 29th and upon its arrival encamped upon Capitol hill until July 10, when it was assigned to the 4th brigade 1st division of the Army of Northeastern Virginia. It was first under fire at Blackburn's ford with a loss of 34 men. It was in reserve at Bull Run, then returned to Washington, encamped at Arlington heights and was transferred to Wadswprth's brigade, McDowell's division. The 12th having been mustered into the state service for a two years' term was mustered into the U. S. service Aug. 13, 1861, for the remainder of the two years in spite of protest. In Jan., 1862, it was reorganized and made a battalion of five companies, which was stationed near Washington at Forts Ramsay, Tillinghast, Craig and Buffalo until March 21,having been joined early in February by five companies of the reorganized 12th militia. With Butterfield's brigade, Porter's division, 3d corps, the completed regiment moved via Fortress Monroe to Hampton and Yorktown; was active in the siege of Yorktown; in May was assigned to the 3d brigade, 1st division, 5th corps, with which it fought through the Seven Days' battles; was in Gen. Pope's campaign in Virginia; lost 143 men at the second Bull Run in killed, wounded and missing; was in reserve at South mountain and Antietam; fought at Fredericksburg in December, and then went into camp at Fal-mouth. The original members not reenlisted were mustered out at Elmira May 17, 1863. The three years men were formed into two companies which were transferred on June 2, 1864, to the 5th N. Y. veteran infantry. From May, 1864, the battalion of two companies served as provost guard with the 5th corps and was present through the Wilderness campaign. The total loss of the 12th was 69 deaths from wounds and 68 from other causes. 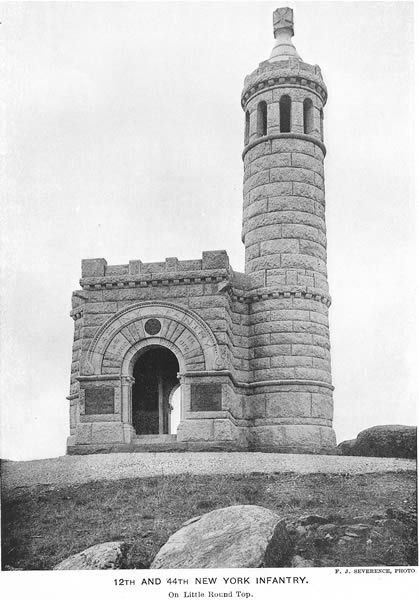 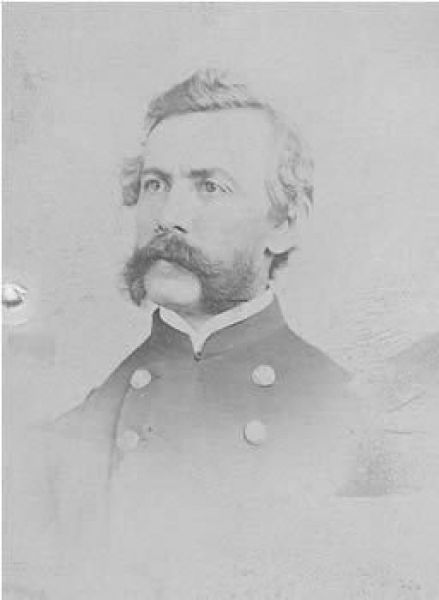 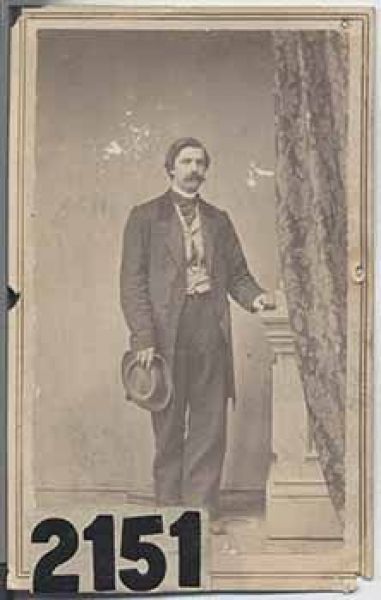 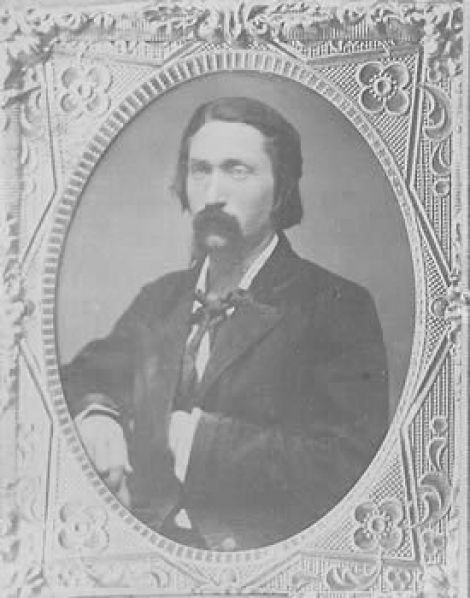 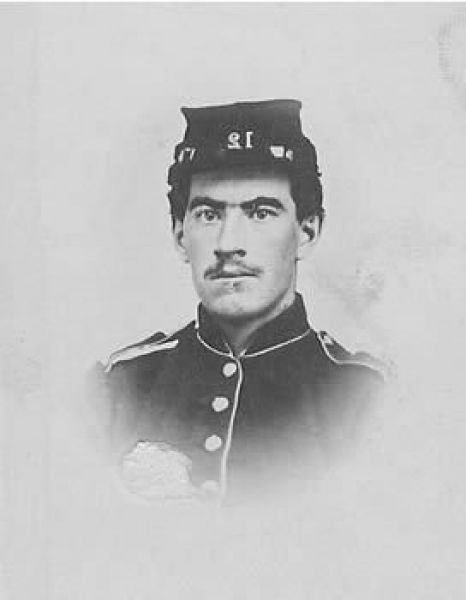 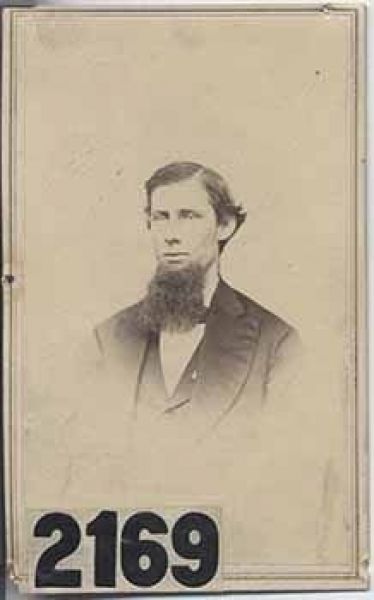 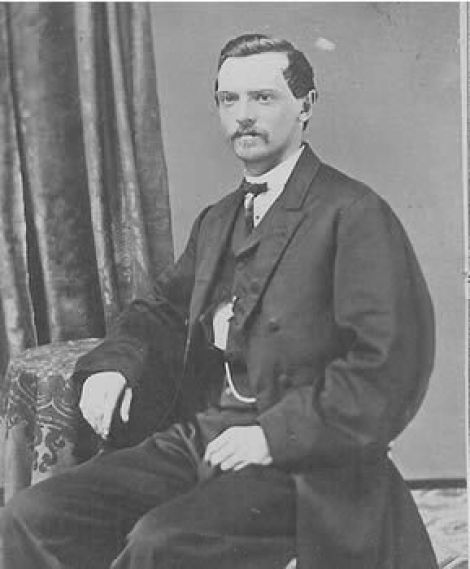 New York 12th Regiment: No. 2. New York: H. De Marsan, 1860s.
Description: 1 broadside ; 23 x 15 cm.
3 stanzas, each with chorus; first line: When rebellion first made its appearance./ Text within historiated border./ Refrain: To fight for the Red, White, and Blue./ Elsewhere attributed to Albert F. Dawson./ N-YHS copy mounted, with other ballads, on a sheet from the William P. Wright scrapbooks./ N-YHS copy imperfect: closely trimmed, with loss of border and imprint.
Other Titles: When rebellion first made its appearance.
Located at the New York Historical Society.

Report of the proceedings-- in connection with the monument erected by Maj.-Gen. Daniel Butterfield, U.S.V. at Fredericksburg, Va.
in honor of the Fifth Corps, Army of the Potomac : and presentation of a tablet by the 12th N.Y. Regiment Association to the Oneida Historical Society, Utica, New York. [Utica, N.Y. : s.n., 1901.

Wells, William R. Papers, 1813-1905.
Description: 71 items.
Abstract: Correspondence of members of the Wells family of New York and Wisconsin, including letters, 1861-1862, from William R. Wells, with the 12th New York Regiment in federal camps near Washington, D.C., and in Virginia. Family correspondence includes references to Seventh Day Adventist activities in the 1840s and 1850s; Civil War correspondence refers to camp life and battles and to Wells's unhappiness with the necessity of serving in the army.
Located in the Southern Historical Collection, University of North Carolina at Chapel Hill (#2960).

Winthrop, Frederic, et al. Papers, 1861-1867.
Description: 1 box and 1 oversize box.
Abstract: Civil war papers of Frederic Winthrop, including seven letters from the field to his brothers Grenville and Robert Winthrop, 1862-65. Winthrop served in Virginia with the 12th New York Volunteer Infantry (1861-64); as chief of staff to Gen. R.B. Ayers of the 1st Brigade, 2nd Division, 5th Corps of the Army of the Potomac (1864); and as commander of the 5th New York Volunteer Veterans, known as Duryee's Zouaves (1864-65). Topics include picket duty, work on roads and bridges, and the Peninsular Campaign (1862). The papers also contain official reports and papers, including an account of the Battle of Hatcher's Run (Feb. 1865); letters, telegrams, etc, (1865-67) to Grenville Winthrop and others upon Winthrop's death at the Battle of Five Forks on 1 Apr. 1865, including accounts of the battle, testimonials, news of the transfer of Winthrop's body, biographical sketches, and poems on Winthrop's death. Correspondents include James R. Campbell, Arel Leatz, and R.B. Ayres.
Located at the Massachusetts Historical Society.

Waud, Alfred R. Col. Butterfields headquarters, Camp Anderson D[C]
Description: 1 drawing on brown paper : pencil and Chinese white ; 19 x 27.4 cm. (sheet)
Note(s): Title inscribed on verso./ Inscribed on verso: long table in middle covered with black cloth - flowers in tumblers papers books, E[t]c. wooden settees all round apartment Reg flags in middle bedroom on left officers about E[t]c-- not so interesting as the other sketches--give the regimental groups by all means--it will sell a great many I think and the uniform meets with much favour here./ Formerly Waud no. B-15.
Located at the Library of Congress in the Civil War drawing collection (DLC)
Located online at http://hdl.loc.gov/loc.pnp/cph.3c07261 [link opens new window].

Waud, Alfred R. Funeral of Col. Vosburgh. The Hearse approaching the R.R. Depot.
Description: 1 drawing on brown paper : pencil, Chinese white, and black ink wash ; 28.1 x 38.2 cm. (sheet).
Note(s): Title inscribed below image./ Sketch features the Capitol in the background, with beginning stages of construction on the dome./ Inscribed on verso: The hearse was black--4 white horses--Staff officers of 12th reg. walking at the side. Colonels black horse led after coffin covered with the flag. Sword and hat laid on top. and two wreaths of flowers--drummers and musicians on left red coats--drums covered with black cloth. Soldiers on the opposite side without arms--on right mounted Rhode Island officers--and in front R.I. band--in blue shirts belted around waist--crowd behind on hacks stages Etc. have another sketch of funeral service send it tomorrow.Reference print available in the Civil War Drawings file -- I./ Reference print available in Ray, Plate 3 (p. 77)
Located at the Library of Congress in the Civil War drawing collection (DLC)
Located online at http://hdl.loc.gov/loc.pnp/cph.3g12566 [link opens new window].