This regiment, Col. Mathew Murphy, was organized as the first regiment of the Corcoran Brigade, in New York city, in August, 1862, largely of members of the 69th Regiment of the National Guard of the State, returning from their three months' service as such. November 17, 1862, the organization of the regiment — Sixty-ninth National Guard Artillery — was completed at Newport News, Va., by adding to it the men enlisted for the sixth regiment of the Corcoran Brigade, except those of Company D. The reorganized regiment was mustered in the service of the United States for three years November 17, 1862, at Newport News, Va., and the companies were recruited principally in New York city. March 21, 1864, the War Department gave the regiment the designa-tion, 182d Regiment N. Y. Volunteers. 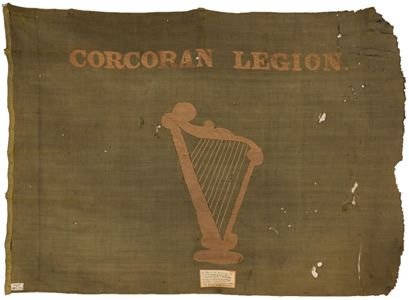 This green wool flag includes a buff-colored cotton inscription, "CORCORAN LEGION," appliqued to the front and back along the top. A similarly colored…