The following is taken from New York in the War of the Rebellion, 3rd ed. Frederick Phisterer. Albany: J. B. Lyon Company, 1912.
This regiment, Col. Wm. M. Gregg, was organized at Elmira, and the companies were mustered in the service of the United States for three years, A, B, C, D, E, F and G April 5, 13, 23, May 11, 16, 25, and July 20, 1864, respectively; for one and three years, Company H September 13, 1864; and for one year Companies I and K September 13 and 15, 1864. Company G, originally Company A, 180th Infantry, transferred to this regiment, joined the regiment July 29, 1864.
The companies were recruited principally: A at Elmira, Lockport and Buffalo; B at Elmira; C at Italy, Hornellsville, Tyrone, Reading, Dix, Cohocton, Niagara, Royalton, Butternuts, Andover and Batavia; D at Ellicottsville, Portville, Dunkirk, Freedom, Carrolton, Buffalo, Conewango, Clymer, Hinsdale and Onondaga; E at Buffalo, Hopewell and Phelps; F at Buffalo, Benton, Middlesex, Potter, Milo, Southport, Hornellsville, Jerusalem and Warsaw; G at Elmira and Buffalo; H at Elmira, Horseheads, Niagara, Hornellsville, Ellicottsville, Amity, Chemung, Dansville, Big Flats and Bradford; I at Ithaca, Newfield, Danby and Caroline; and K at Sanford, Tioga, Candor, Vestal, Union and Port Crane.
The regiment left the State in detachments, and served in the 22d Corps from May, 1864; in the 2d Brigade, 1st Division, 9th Corps, Army of the Potomac, from June 11, 1864; in the 1st Brigade, 1st Division, 9th Corps, from June 18, 1864; in the 2d Brigade, 1st Division, 9th Corps, from July, 1864; in the 2d Brigade, 2d Division, 9th Corps, from September, 1864; and, commanded by Colonel Gregg, it was honorably discharged and mustered out June 8, 1865, near Alexandria, Va.
During its service the regiment lost by death, killed in action, 4 officers, 36 enlisted men; of wounds received in action, 3 officers, 30 enlisted men; of disease and other causes, 118 enlisted men; total, 7 officers, 184 enlisted men; aggregate, 191; of whom 25 enlisted men died in the hands of the enemy.

The following is taken from The Union army: a history of military affairs in the loyal states, 1861-65 -- records of the regiments in the Union army -- cyclopedia of battles -- memoirs of commanders and soldiers. Madison, WI: Federal Pub. Co., 1908. volume II.
One Hundred and Seventy-ninth Infantry.—Col., William M. Gregg; Lieut.-Cols., Franklin B. Doty, Albert A. Terrill; Majs., J. Barnett Sloan, John Barton, Albert A. Terrill, Giles H. Holden. This regiment, recruited in the counties of Chemung, Erie, Steuben, Tioga and Tompkins, was organized at Elmira for one and three years' service. Cos. A, B, C, D, E, F and G were mustered into the U. S. service from May 11 to July 20, 1864, for three years; Co. H for one and three years, on Sept. 13, 1864; and I and K for one year on Sept. 13-15, 1864. Co. A, originally enlisted for Col. Lewis T. Barney's 180th N. Y., did not join the regiment until Feb. 21, 1865. The 179th left the state by detachments from May, 1864, proceeding to Washington, D. C., where it served in the 22nd corps until the summer of 1864 in the performance of garrison duty. On June II, 1864, it joined Grant's army at Cold Harbor, where it was assigned to the 2nd brigade, 1st division, 9th corps. In the 1st brigade, same division and corps, it took an active part in the first assaults on Petersburg in June, losing 11 killed, 70 wounded and 10 missing. On the failure of the assaults the regiment went into the intrenchments occupied by the 9th corps, on a part of the line very near to the enemy's works, where the men were exposed to an almost incessant fire during the long siege, resulting in a daily loss of men. The casualties of the regiment from this source during the siege amounted to 62 killed, wounded and missing. Among the killed during the assault of June 17 was Maj. Sloan. The famous mine which was exploded on July 30, 1864, was dug within and in front of the line of the 9th corps and the 179th was hotly engaged during the assault which followed the explosion. Its loss here was 56 killed, wounded and missing, among the mortally wounded being the gallant Maj. Barton. The regiment was again in action at the battle of the Weldon railroad, where it sustained some casualties. Both the regiment and the division were now much reduced in numbers by their severe losses, and a reorganization of the corps took place which placed the 179th in the 2nd brigade of Potter's division, with which it was warmly engaged at Poplar Spring Church in September, losing 58 killed, wounded and missing. The regiment next took part in the action at Hatcher's run, and it rendered excellent service during the critical attack of Fort Stedman, March 25, 1865. It then entered on the final campaign and took a prominent part in the storming of Petersburg, April 2, 1865, losing 60 killed, wounded and missing, including Lieut.-Col. Doty, mortally wounded. This was the last battle in which it was engaged, and on June 8, 1865, under Col. Gregg, it was mustered put at Alexandria, Va. The regiment lost during its term of service, 7 officers and 66 enlisted men killed and mortally wounded; 118 enlisted men from disease and other causes; a total of 191, of whom 25 died as prisoners. 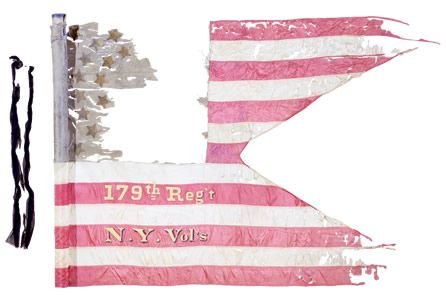 Bird, William. William Bird papers, 1861-1865, 1908.
Included are 48 letters to his parents written during Bird's Civil War service with the 37th and 179th Regiments, New York Infantry, describing army and camp life, battles and skirmishes, and commenting on generals Ambrose E. Burnside and Joseph Hooker. An obituary (1908) summarizes Bird's later life as a farmer and local official in Martin County, Minnesota.
Originals loaned for copying by Mrs. Walter C. Olin, St. Paul./ Available for sale or interlibrary loan from the Minnesota Historical Society.
An inventory that provides additional information about these materials is available in the repository; filed as A/m.B618.
Located at the Minnesota Historical Society.

Messing, Henry J. Papers,1864-1917.
Consists of letters, documents, and memorabilia relating to the military career of Captain Henry J. Messing, to the 179th Regiment, Co. G, New York Volunteer Infantry with which he served, and to his participation in the encampments of the Grand Army of the Republic. The 1864-1865 papers include company registers, pay slips, and quarter master charges for Messing and the men of Co. G. Also present are Muster-In and Muster-Out rolls for Messing which document his military career. The post-war documents and letters relate to Messing's service record and to the 179th Regiment, including a brief history of Co. G prepared by Messing in 1897. Memorabilia reflecting Messing's involvement with the GAR encampments, including twelve badges, two officer's stripes and an unidentified metal button, complete the collection.
85 items.
Located Lilly Library, Indiana University, Bloomington, IN.

Towner, Ausburn, 1836-1909. "Military Affairs in the County." Our county and its people : a history of the valley and county of Chemung, from the closing years of the eighteenth century. Syracuse, N.Y. D. Mason & Co. 1892.
Available online: http://archive.org/details/AHistoryOfTheValleyAndCountyOfChemung
Resource identified and submitted by Robert Gill.