The following is taken from New York in the War of the Rebellion, 3rd ed. Frederick Phisterer. Albany: J. B. Lyon Company, 1912.
November 12, 1862, Col. Julius W. Adams received authority to recruit a regiment, the 2d Hawkins' Zouaves, in the first seven Senatorial Districts of the State for a service of nine months; February 23, 1863, the term of service was changed to three years. October 23, 1862, Col. Ethan Allen received authority to recruit a regiment, the Ethan Allen Regiment, 3d Merchants' Brigade, in the same territory, for nine months' service. November 19, 1862, Col. Henry E. Gotlieb was authorized to recruit a regiment, the Federal Guard, in the same districts; this authority was revoked January 24, 1863, and the men enlisted transferred to Colonel Allen's regiment; May 12, 1863, the term of service of the men enlisted in the Merchants' Brigade for nine months was changed to three years. April 21, 1863, the 2d Hawkins' Zouaves and the 3d Merchants' Brigade were consolidated, with Colonel Adams in command, and designated the Blair Rifles. Authority was granted December 2, 1862, to Col. John G. Bell to recruit the Pratt Guards; December 4, 1862, to Col. Henry F. Liebenau to recruit the Seymour Light Infantry; January 10, 1863, to Col. Edward Wehler to recruit the Burnside Rifles; February 6, 1863, to Col. James R. Quick to recruit the Westchester Light Infantry; February 11, 1863, to Col. Francis H. Braulich to recruit the Defenders. June 20, 1863, the 178th Regiment was organized by the consolidation of the Blair Rifles, the Pratt Guards, the Seymour Light Infantry, the Burnside Rifles, the Westchester Light Infantry and the Defenders into one regiment, under Col. Edward Wehler, and its organization was completed October 14, 1863, by the assignment to it of the men enlisted at the time for the 7th Infantry, reorganizing, under Col. George W. von Schack; of the men enlisted for the 8th Infantry, reorganizing, under Col. Salm Salm, and of those for the 31st Infantry, reorganizing, under Col. Frank Jones. February 1, 1865, the regiment was consolidated into a battalion of five companies at Eastport, Miss.; Company A receiving men from Companies E and F; B men from Companies G and H; C men from G, H, I and K; D men from F, G, H, I and K; and Company E from Companies B, F and K.
The companies were recruited principally: A at Rochester, Buffalo, Niagara and Kingston; the other companies at New York city; and they were mustered in the service of the United States for three years: A June 18, 1863; B and C, of the Burnside Rifles, June 18, 1863; D and E June 19, 1863; F August 22, 1863; G — Company A, 7th Infantry, reorganizing August 31, 1863; H — Company A, 8th Infantry, reorganizing August 29, 1863; I — Company B, 8th Infantry, reorganizing September 3, 1863, and K October 17, 1863.
Companies A, B, C, D and E, commanded by Lieut.-Col. Charles F. Smith, left the State June 21, 1863; Company F joined September 1, 1863, and the remaining companies October 24, 1863, with Colonel Wehler; the regiment served in De Russey's Division, 22d Corps, from June, 1863; as Provost Guard in the city of Washington, D. C., from July 9, 1863; it left Washington October 31, 1863, and served at Eastport, Miss., from November 16, 1863; in 2d Brigade, 3d Division, 16th Corps, from December, 1863; in 3d Brigade, 3d Division, Detachment of 16th Corps, from February, 1864; in 3d Brigade, 2d Division, 16th Corps, from December, 1864; and, commanded by Lieut.-Col. John B. Gandolfo, it was honorably discharged and mustered out April 20, 1866, at Montgomery, Ala.
During its service the regiment lost by death, killed in action, 9 enlisted men; of wounds received in action, 9 enlisted men; of disease and other causes, 2 officers, 190 enlisted men; total, 2 officers, 208 enlisted men; aggregate, 210; of whom 35 enlisted men died in the hands of the enemy.

The following is taken from The Union army: a history of military affairs in the loyal states, 1861-65 -- records of the regiments in the Union army -- cyclopedia of battles -- memoirs of commanders and soldiers. Madison, WI: Federal Pub. Co., 1908. volume II.
One Hundred and Seventy-eighth Infantry.—Col., Edward Weh-ler; Lieut-Cols., Charles F. Smith, John B. Gandolfo, Majs., Selden Hetzel, Augustus B. Sage. The organization of this regiment was begun at Staten island June 20, 1863, by the consolidation of the Blair Rifles, Pratt Guards, Seymour Light Infantry, Burnside Rifles, Westchester Light Infantry and Defenders. Its organization was completed on Oct. 14, 1863, by the assignment to it of the men enlisted for the 7th, 8th and 31st veteran N. Y. infantry, all of which were then reorganizing. Co. A was recruited at Rochester, Buffalo, Niagara and Kingston, and the remaining companies in New York city. The regiment was mustered into the U. S. service by companies, between June 18 and Oct. 17, 1863, for three years. It left the state by detachments from June 21 to Oct. 24, proceeding to Washington, D. C., where it served as provost guard for several months. On Oct. 31, 1863, it was ordered to Mississippi and stationed at Eastport, in the vicinity of Corinth. It was placed in Mower's division of the 16th corps; was engaged at Camden, Jackson, and on Sherman's Meridian expedition. Attached to the 3d brigade (Col. Risdon M. Moore), Mower's division, detachment of the 16th corps, it moved with Banks' expedition up the Red River, taking part in engagements at Fort De Russy, Pleasant Hill, Campti, Cloutierville, Moore's plantation, Bayou Rapides, Mansura and Simsport. The regiment under command of "Col. Wehler was warmly engaged at Pleasant Hill, where it recaptured a battery in a spirited charge and drove the enemy in confusion. Its loss in this battle amounted to 31 killed, wounded and missing. When the detachment of the 16th corps consisting of Mower's and A. J. Smith's divisions were "loaned" by Gen. Sherman to Gen. Banks during the Red River campaign, it was understood they would soon return. The Red River campaign proved so disastrous, however, that their return was delayed and they were unable to join in Sherman's Atlanta campaign. Consequently the 178th remained with the detachment of the 16th corps under A. J. Smith in the Mississippi valley. On the conclusion of the Red River campaign, the regiment took part in the following engagements during the rest of the year 1864: Lake Chicot, Ark.; Colliersville, and La Grange, Tenn.; Ripley, Tupelo, Old Town creek and Hurricane creek, Miss.; Lexington, Independence, and Glasgow, Mo.; and Nashville, Tenn. In the 3d brigade, Garrard's division, 16th corps, it proceeded to Mobile in the spring of 1865, participating in the siege of that city, and the fighting at the fall of Fort Blakely. The regiment was consolidated into a battalion of five companies at Eastport, Miss., in Feb., 1865, and continued in service a year longer, being finally mustered out on April 20, 1866, at Montgomery, Ala., under command of Lieut.-Col. Gandolfo. During its term of service the 178th lost by death 18 men killed and mortally wounded; by disease and other causes 2 officers and 190 enlisted men, a total of 210, of whom 35 died in the hands of the enemy. Its long service in the South accounts for its large disease mortality. 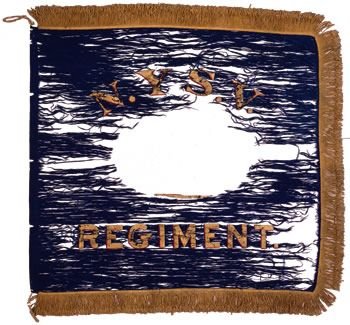 Kobbe, William August.  The William August Kobbe papers,1840-1931.
Contains the following types of materials: correspondence, memoirs, reports / studies, maps / charts. Contains information pertaining to the following wars: Civil War, Late Indian War; Spanish-American War; Philippine Insurrection. General description of the collection: William August Kobbe papers include General Kobbe's service in the Philippines during the Spanish-American War and the Philippine Insurrection. A typescript copy of his diary (transcribed from the original with a few additional comments) covers the period from February 4, 1899, to September 14, 1901. His introduction to the diary, moreover, recounts his service from May 1898 to February 1899. Additional material on his operations in the Philippines is contained in files of official and personal correspondence, reports, maps, and clippings. Only capsule biographies and one letter of reminiscence in contrast, relate to his earlier service in the Civil War and the Indian Wars. Material on his subsequent command of the Department of Dakota, 1902-1904, is comparably negligible.
3 boxes.
Located at the Military History Institute in Carlisle, PA.

Sage, Augustus B. 170th New York Infantry, Co. B.Papers (1844-1889).
These papers include personal letters and service records relating to Sage's military service during the Civil War. The letters concern routine matters such as camp life, drill, marching, and picket duty.
Sage served in the 11th, 170th and 178th regiments of New York State volunteers. He was an attorney and acted as an agent for several states in New York.
1 box (.25 cu. ft.).
Located at the New York State Library Manuscripts and Special Collections.