The following is taken from New York in the War of the Rebellion, 3rd ed. Frederick Phisterer. Albany: J. B. Lyon Company, 1912.
September 24, 1862, Col. Michael K. Bryan received authority to recruit a regiment, the fourth, later the fifth, for the Corcoran Brigade. The organization was completed November 17, 1862, by forming of Colonel Bryan's men three companies; by assigning to it the men recruited by Col. W. Mayer for the 171st Regiment as three more companies; by forming the men recruited by Col. Minthorne Tompkins, not already transferred to other organizations, in three companies, and by making the tenth company from parts of other incomplete organizations. Col. Minthorne Tompkins received authority, August 23, 1862, to recruit the I75th Regiment in the then first seven Senatorial Districts of the State; the regiment was not completed and the men were transferred to the 156th Infantry, and Colonel Bryan's regiment from November 19, 1862, the organization, as formed above, with Michael K. Bryan as Colonel, was designated the 175th Regiment. The companies were recruited principally in New York city, at Albany, Castleton, Troy, Glen Falls, Knox and Watervliet, and mustered in the service of the United States for three years in September, October and November, 1862. October 17, 1863, the regiment was consolidated into three companies, A, B and C; in October, 1864, two new companies, D and E, the former, Milo E. Washburn's Glens Falls Company, joined the battalion; in September, 1864, four additional companies recruited for this regiment were assigned to the 189th Infantry, and the 15th Engineers instead. The second Companies D and E were recruited mainly at Rochester, Schenectady, Plattsburg, Lodi, Hornby, Harford, Hector, Virgil and Lapeer, and mustered in the service of the United States at Hart's Island and Elmira for one year September 24, and October 8, 1864, respectively.
The regiment left the State November 21, 1862; it served at Suffolk, Va., from November, 1862; in 1st Brigade, Augur's Division, Department of the Gulf, from January, 1863; in 3d Brigade, 3d Division, 19th Corps, from March, 1863; in 2d Brigade, 1st Division, 19th Corps, from August, 1863; in 3d Brigade, 2d Division, 19th Corps, from February, 1864; in 3d Brigade, 1st Division, 10th Corps, from April, 1865; in the Department of the South and Georgia, from June and July, 1865, respectively; and, commanded by Maj. Charles McCarthy, it (five companies) was honorably discharged and mustered out, Companies D and E at Savannah, Ga., June 30, 1865, and Companies A, B and C at Greensboro, Ga., November 27, 1865.
During its service the regiment lost by death, killed in action, 1 officer, 7 enlisted men; of wounds received in action, 6 enlisted men; of disease and other causes, 4 officers, 117 enlisted men; total, 5 officers, 130 enlisted men; aggregate, 135; of whom 3 officers, 2 enlisted men, died in the hands of the enemy.

The following is taken from The Union army: a history of military affairs in the loyal states, 1861-65 -- records of the regiments in the Union army -- cyclopedia of battles -- memoirs of commanders and soldiers. Madison, WI: Federal Pub. Co., 1908. volume II.
One Hundred and Seventy-fifth Infantry.—Cols., Michael K. Bryan, John A. Foster; Lieut.-Cols., John A. Foster, John Gray; Majs., John Gray, Charles McCarthy. The 175th, the 5th regiment of the Corcoran brigade, was recruited from the cities of New York, Albany, Castleton, Troy, Glens Falls, Knox and Water-vliet by Cols. Bryan, Master and Minthorn Tompkins. It was organized at New York city on Nov. 19, 1862, with Col. Bryan in command, and was mustered into the U. S. service from Sept. to Oct., 1862, for three years. In Oct., 1863, the regiment was consolidated into three companies, A, B and C, and was increased to a battalion of five companies in Oct., 1864, by the addition of two new companies—D and E. The regiment left the state on Nov. 21, 1862, proceeding first to Suffolk, Va., whence it shortly after, sailed for Louisiana. In the 3d (Gooding's) brigade, Emory's division, 19th corps, it was under fire for the first time at Fort Bisland, losing 1 killed and 6 wounded. It was engaged in a skirmish at Franklin, La., in May and from May 30 to July 8, took part in the siege of Port Hudson, suffering severely in the assault of June 14. Its loss during the siege was 53 killed, wounded and missing, the gallant Col. Bryan being killed in the assault of June 14, while bravely encouraging his men. During the remainder of the year the regiment was engaged in post and garrison duty, with occasional skirmishes with the enemy. In the spring of 1864, now in the 3d brigade of Grover's division, 19th corps, it moved on Banks' Red River expedition and was engaged at Alexandria and Mansura. It was also three times engaged at Atchafalaya in May and June. In July, the battalion returned north with the first two divisions of the 19th corps, and as a part of Grover's division, took part in Sheridan's campaign against Early in the Shenandoah Valley, being engaged at Opequan, Fisher's hill and Cedar creek, and after the close of the campaign it proceeded to Savannah with Grover's division. In March, 1865, Gen. Birge now commanding the division, it was ordered to North Carolina, where it was temporarily attached to the 10th corps as a part of the 1st division and accompanied the corps in its advance on Wilmington, afterward being present at Bennett's house at the surrender of Gen. Johnston. Cos. D and E were mustered out at Savannah, Ga., June 30, 1865, and the other three companies under Maj. Charles McCarthy, at Greensboro, Ga., Nov. 27, 1865. Col. Foster was brevetted brigadier-general in 1865 in recognition of his gallant services during the war. The loss of the regiment during its term of service was I officer and 13 men killed and mortally wounded; 4 officers and 117 men died of disease and other causes; total deaths, 135. 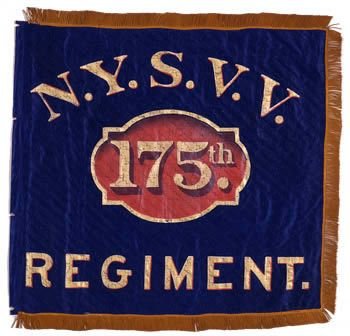 Barner, Albert. Albert Barner letters,1864-1865.
The collection consists of 13 letters written by Albert Barner, 11 September 1864-8 July 1865, most of which are addressed to his parents. In the letters, Barner discussed troop movements, the process of waiting to be discharged, his plans for work after the war, and other topics regarding daily military life.
13 items.
Located at the University of North Carolina, Chapel Hill.

Sexton, Jason. Jason Sexton papers,1865.
The collection consists of papers of Jason Sexton while serving as the Provost Marshall at Ft. Pulaski (Ga.) with the 175th New York Infantry Regiment from January - June 1865. The papers include correspondence, receipts, inventories, and a receipt for Confederate prisoners escorted by Sexton. The bulk of the correspondence is between Sexton and his wife, Hettie Sexton. The letters describe Sexton's duties as Provost Marshall; attending church services and the political leanings of the local people; high prices for food; taking care, keeping track of, and transporting Confederate prisoners to Ft. Monroe for exchange; the capture of Jefferson Davis and his passage through the fort; and his news of family and friends. The collection also contains a lengthy letter from Sexton, on board the steamer Oriental, to his family written January 14-19, 1865. The letter describes Sexton's journey from Baltimore to Savannah, the hardships of the voyage, and the transport and conduct of the troops (175th and 176th New York and the 38th Massachusetts Infantry Regiments) on the steamers.
16 items.
Located at Fort Pulaski National Monument.