The following is taken from New York in the War of the Rebellion, 3rd ed. Frederick Phisterer. Albany: J. B. Lyon Company, 1912.
Colonel Harmon D. Hull received authority to raise this regiment for a service of nine months, but this term of service was soon changed to three years; it received its numerical designation November 29, 1862; only six companies were then recruited. The men were mustered in the service of the United States for three years in August, September, October, November and December, 1862. In March, 1864, Companies G, H, I and K were organized; but on joining the battalion in the field they were at once consolidated with the six original companies.
The companies were recruited principally: A, C, D and E at New York city; B at New York city and Jamaica; F at New York city and Brooklyn; G, H, I and K at New York city and Long Island.
The battalion, Lieut-Col. Abel Smith, Jr., in command, left the State December 2, 1862; it served in the 3d Brigade, Sherman's Division, Department of the Gulf, from December, 1862; in 3d Brigade, 2d Division, 19th Corps, from March, 1863; in the 1st Brigade, 3d Division, 19th Corps, from July, 1863; in the 3d Brigade, 1st Division, 19th Corps, from January, 1864; in the 3d Brigade, 1st Division, Army of the Shenandoah, from March, 1865; in the 3d Brigade, Dwight's Division, defenses of Washington, from April, 1865; in the 3d Division, Department of the South, from June, 1865; and, under Maj. Wm. W. Stephenson, it was honorably discharged and mustered out September 1, 1865, at Charleston, S. C.
During its service the regiment lost by death, killed in action, 1 officer, 36 enlisted men; of wounds received in action, 1 officer, 15 enlisted men; of disease and other causes, 2 officers, 79 enlisted men; total, 4 officers, 130 enlisted men; aggregate, 134; of whom 18 enlisted men died in the hands of the enemy.

The following is taken from The Union army: a history of military affairs in the loyal states, 1861-65 -- records of the regiments in the Union army -- cyclopedia of battles -- memoirs of commanders and soldiers. Madison, WI: Federal Pub. Co., 1908. volume II.
One Hundred and Sixty-fifth Infantry.—Lieut.-Cols., Abel Smith, Jr., Governeur Carr, William R. French; Majs., Governeur Carr, Felix Angus, William W. Stephenson. The 165th, the 2nd battalion, Duryea's Zouaves, was originally recruited for a nine months' term, but was afterwards changed to three years. Only six companies were recruited, principally from New York city and Brooklyn, and were mustered into the U. S. service between, Aug. and; Dec., 1862, for three years. In 1864, four new companies joined the battalion in the field and were consolidated with the original six companies. The battalion left the state Dec. 2, 1862, sailing for New Orleans, and on its arrival was assigned to the 3d brigade, 2nd (Sherman's) division, l9th corps, Department of the-Gulf. It participated in skirmishes in March, 1863, at North pass, Ponchatoula and Berwick bay, sustaining a few casualties, and was actively engaged throughout the long siege of Port Hudson, losing heavily in the assault of May 27. Its losses during the siege amounted to 106 killed, wounded and missing, among the mortally wounded being the gallant Lieut.-Col. Abel, who fell in the assault of May 27. It accompanied Franklin's expedition to Sabine pass, Tex., in Sept., 1863, and was later twice engaged at Vermilion bayou. In the 3d brigade, Emory's division, it took part in Banks'. Red River expedition in the spring of 1864, fighting at Sabine crossroads, Pleasant Hill, Cane river crossing and Mansura. The loss at Sabine cross-roads was 48 killed, wounded and missing, and at Pleasant hill, 49. Returning north, the regiment was in action in September at Berryville, Va., but sustained no loss. When Dwight's 1st division, Army of the Shenandoah, left the valley in April, 1865, as a part of the 3d brigade, the regiment accompanied it to Washington and subsequently to Savannah, Ga. Under Maj. Stephenson it was mustered out at Charleston, S. C, Sept. I, 1865, having lost by death during its term of service 2 officers and 44 men killed and mortally wounded; 2 officers and 79 men died of disease and other causes; total deaths, 127, of whom 18 men died in the hands of the enemy. 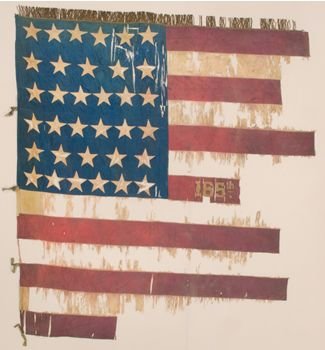 On December 13, 1862, at Camp Washington, Staten Island, the 165th New York Volunteers received a stand of colors from “a select party of gentlemen…

Hanson, Joseph Mills. The assault ... :dedicated to the veterans of the one hundred and sixty-fifth regiment New York volunteers (2nd Duryee Zouaves) on the forty-first anniversary of their assault upon the intrenchments of Port Hudson, La., May 27th, 1863. S.l., 1904. 4 p. ; 23 cm.
Located at the New York Historical Society, New York, NY.