The following is taken from New York in the War of the Rebellion, 3rd ed. Frederick Phisterer. Albany: J. B. Lyon Company, 1912.
August 28, 1862, Lieut-Col. Edward L. Molineux, 23d Militia, received authority to recruit this regiment in the then first three Senatorial Districts of the State. It was to be commanded by Capt. Matthew M. Blunt, 12th U. S. Infantry, as Colonel. October 28, 1862, the men enlisted for the 167th Infantry, Col. Homer A. Nelson, were sent from Hudson to East New York to be united with those of the 159th Infantry. November 1, 1862, Homer A. Nelson was appointed Colonel of the consolidated force, and Edward L. Molineux, Lieutenant-Colonel; the regiment thus formed retained the number of Lieutenant-Colonel Molineux's regiment, which formed Companies B, F, H and K, the remaining companies being formed of the men enlisted originally for the 167th Infantry. The regiment was mustered in the service of the United States for three years November 1, 1862, at New York city. In February, 1864, a new company replaced Company G, consolidated with the others.
The companies were recruited principally: A at Hudson, Greenport, New Lebanon, Livingston, Claverack and Ghent; B, H and K at Brooklyn; C at Hudson, Taghkanick, Copake, Stockport, Livingston, Gallatin, Claverack, Stuyvesant and Germantown; D at Brooklyn, Hudson, Fishkill and Ghent; E at Ghent, Claverack, Hudson, Copake, Livingston, Hillsdale, Fishkill, Greenport, Stuyvesant and Taghkanick; F at Brooklyn and Brook-haven; G at Hudson, Kinderhook, Claverack, Stockport, Ghent, Chatham, Taghkanick, New Lebanon, Fishkill and Poughkeepsie; and I at Hudson, Poughkeepsie, Gallatin, Livingston, Pleasant Valley and Taghkanick; the second Company G at Hudson.
The regiment left the State December 4, 1862; it served in the 3d Brigade, Grover's Division, 19th Corps, from December, 1862; in the 3d Brigade, 4th Division, 19th "Corps, from March, 1863; in the 1st Brigade, 4th Division, 19th Corps, from August, 1863; in the 2d Brigade, 2d Division, 19th Corps, from March, 1864; with the 10th Corps, Army of the James, from July 21 to 31, 1864; with the Army of the Shenandoah, from October, 1864; in the 2d Brigade, 1st Division, 10th Corps, from April, 1865; in the Department of Georgia, from June, 1865; and, commanded by Col. William Waltermire, it was honorably discharged and mustered out October 12, 1865, at Augusta, Ga.
During its service the regiment lost by death, killed in action, 6 officers, 46 enlisted men; of wounds received in action, 4 officers, 30 enlisted men; of disease and other causes, 1 officer, 130 enlisted men; total, 11 officers, 206 enlisted men; aggregate, 217; of whom 14 enlisted men died in the hands of the enemy.

The following is taken from The Union army: a history of military affairs in the loyal states, 1861-65 -- records of the regiments in the Union army -- cyclopedia of battles -- memoirs of commanders and soldiers. Madison, WI: Federal Pub. Co., 1908. volume II.
One Hundred and Fifty-ninth Infantry.—Cols., Homer A. Nelson, Edward L. Molineaux; Lieut.-Cols., Edward L. Molineaux, Gilbert A. Draper, Charles A. Burt, Edward L. Gaul, William Wal- termire, Wells O. Pettit; Majs., Gilbert A. Draper, Charles A. Burt, Edward L. Gaul, William Waltermire, Robert McD. Hart, Joseph G. McNutt, Wells O. Pettit, William F. Tieman. The several companies of this regiment were raised in the counties of Dutchess, Kings and Columbia. Cos. B, F, H and K were recruited at Hudson by Lieut.-Col. Molineaux and united with the others at East New York, and the remaining companies were formed from the men enlisted by Col. Nelson originally for the .167th N. Y. The regiment was mustered into the U. S. service at New York city Nov. 1, 1862, for three years. In 1864, a new Co. G replaced the old one, which was consolidated with the others. The 159th left the state on Dec. 4, 1862, and proceeded to New Orleans, where it was assigned to the 3d brigade, 4th (Grover's) division, 19th corps, Department of the Gulf. Its first serious engagement was at Irish bend, where it fought bravely and sustained a loss of 117 killed, wounded and missing, Lieut.-Col. Draper and 4 other officers being among the killed and mortally wounded, and Col. Molineaux among the severely wounded. This was by far the severest loss sustained by any regiment in this fight. It was actively engaged throughout the long siege of Port Hudson, taking part in the first assault of May 27. Its loss during the siege was 73 killed, wounded and missing. After the surrender of Port Hudson the regiment was engaged until the following year in post and garrison duty. In March, 1864, in the 2nd brigade, 2nd (Graver's) division, same corps, it moved on Banks' Red River expedition, being lightly engaged at Alexandria, Mansura and Morganza. In July it proceeded to New Orleans, where it embarked for Washington, the first two divisions of the corps having been ordered to Virginia. On its arrival it joined the 10th corps before Richmond and Petersburg, and was engaged with some loss at Deep Bottom in August. It was actively engaged with the Army of the Shenandoah under Sheridan in the campaign against Early, losing 75 killed, wounded and missing at the Opequan, and 23 at Cedar creek, where the gallant Maj. Hart was among the killed. The fighting in the valley having ended, the regiment was ordered to Savannah, Ga., and in March, 1865, was ordered to North Carolina, where it was temporarily attached to the 10th corps again. It was finally mustered out at Augusta, Ga., Oct. 12, 1865, under command of Col. Waltermire. The regi-. ment lost by death during service 10 officers and 76 enlisted men killed and mortally wounded; 1 officer and 130 men died of disease and other causes; total deaths, 217. 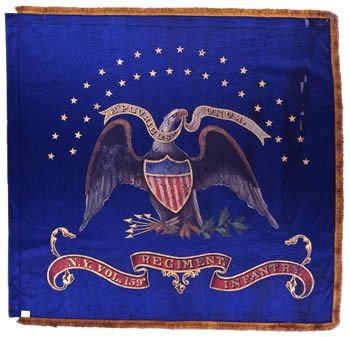 William Tiemann Collection, Donated by the Tiemann and Farrar Families

Dunham, Marshall.  Marshall Dunham photograph album circa 1861-1865.
Baton Rouge, La. : Louisiana Digital Library, 1861-1865? This photograph album was compiled by Sgt. Marshall Dunham of the 159th New York Infantry Regiment and consists of photographs taken in Louisiana during the Civil War. They are categorized according to cities, with the largest group being New Orleans. The album includes photos of buildings and street scenes.
200 digital images.
Available online at: http://louisdl.louislibraries.org/index.php?time=1861-1865
Located at Louisiana State University.

Tiemann, William F. Reminiscences :(manuscript), 1894.
2 v. v. I 117 p. ; 29 cm. v. II 43 p. ; 29 cm.
Language: English
Volume I is an autobiographical account of Tiemann's lifetime experiences prior to the Civil War. Much of the information pertains to his family life at home and his schooling in New York City. Volume II contains an account of his experiences as a prisoner of war during the Civil War. He was detained at Libby Prison in Richmond, Virginia.
Located at the New York State Library Manuscripts and Special Collections.