The following is taken from New York in the War of the Rebellion, 3rd ed. Frederick Phisterer. Albany: J. B. Lyon Company, 1912.
Colonel William Johnson received authority, August 20, 1862, to recruit this regiment in the then 26th Senatorial District of the State; it was organized at Geneva, and there mustered in the service of the United States for three years, September 14, 1862. June 22, 1865, the men not to be mustered out with the regiment were transferred to the 100th Infantry.
The companies were recruited principally: A at Seneca Falls, Fayette, Geneva and Canoga; B at Dundee, Starkey, Barrington and Milo; C at Plielps, Hopewell and Geneva; D at Geneva, Fayette and Varick; E at Ovid, Lodi, Romulus and Covert; F at Geneva; Rushville, Gorham, Rotter Center, Penn Yan and Middlesex; G at Geneva, Can-andaigua and Naples; H at Waterloo, Seneca Falls and Tyre; I at Benton, Milo, Jerusalem, Torrey, Seneca, Branchport and Geneva; and K at Manchester, Bristol, East and West Bloomfield and Hopewell.
The regiment left the State September 22, 1862; it served at Suffolk, Department of Virginia, from September, 1862; at Norfolk, Va., 7th Corps, from October, 1862; at Yorktown, Va., from October, 1863; in Wistar's Division, 18th Corps, from January, 1864; in the 2d Brigade, 2d Division, 18th Corps, from April, 1864; in the 1st Brigade, 2d Division, 18th Corps, from September, 1864; temporarily with 3d Brigade, 2d Division, 18th Corps, in October, 1864; in the 4th Brigade, 1st Division, 24th Corps, from December, 1864; in the 3d Brigade, 1st Division, 24th Corps, from March, 1865, and, commanded by Col. John B. Murray, it was honorably discharged and mustered out June 22, 1865, at Richmond, Va.
During its service the regiment lost by death, killed in action, 2 officers, 63 enlisted men; of wounds received in action, 2 officers, 42 enlisted men; of disease and other causes, 2 officers, 156 enlisted men; total, 6 officers, 261 enlisted men; aggregate, 267; of whom 24 enlisted men died in the hands of the enemy.

The following is taken from The Union army: a history of military affairs in the loyal states, 1861-65 -- records of the regiments in the Union army -- cyclopedia of battles -- memoirs of commanders and soldiers. Madison, WI: Federal Pub. Co., 1908. volume II.
One Hundred and Forty-eighth Infantry.—Cols., William Johnson, George M. Guion, John B. Murray; Lieut-Cols., George M. Guion, John B. Murray, E. Darwin Gage, Frederick L. Manning; Majs., John B. Murray, Henry T. Noyes, F. L. Manning, John Cooley. This regiment, recruited in the counties of Ontario, Seneca and Yates, was organized at Geneva and there mustered into the U. S. service on Sept. 14, 1862, for three years. It left the state on the 22nd and was chiefly engaged in garrison duty at Suffolk, Norfolk and Yorktowii, Va., until 1864, when it was placed in Wistar's division, 18th corps. In May, 1864, then in the 2nd (Stedman's) brigade, 2nd (Weitzel's) division, 18th corps, it took part in the short campaign of the Army of the James under Gen. Butler against Petersburg and Richmond by way of the James river, being engaged at Swift creek, Proctor's creek, Drewry's bluff and Bermuda Hundred. Its loss during this campaign was 78 in killed, wounded and missing. The 18th corps was then ordered to reinforce the Army of the Potomac and the 148th was heavily engaged at Cold Harbor, losing 124 killed, wounded and missing. Returning with the corps to Bermuda Hundred, it moved to Petersburg and took part in the first bloody assault on the works, losing 16 killed, 74 wounded and 26 missing. After the failure of the assaults, the regiment went into position in the trenches on the right of the line, where it suffered daily from the incessant firing, its losses throughout the siege amounting to 124 killed, wounded and missing. In the latter part of August the 18th corps was relieved by the 10th, and the former was ordered into the defenses of Bermuda Hundred. In the latter part of September the regiment was engaged at Fort Harrison with a loss of 24 killed and wounded, and in October it was heavily engaged on the old battlefield of Fair Oaks, where it lost 84 killed, wounded and missing. When the 18th corps was discontinued in Dec., 1864, the 148th became a part of the new 24th corps, with which it participated in the Appo-mattox campaign, sharing in the final assault on Petersburg and the engagements at Rice's station, Burke's station and Appomattox Court House. The regiment by its signal gallantry displayed on many occasions had gained a well earned reputation for courage and efficiency. Corp. E. Van Winkle and privates Henry S. Wells and George A. Buchanan distinguished themselves at Fort Harrison and were the recipients of medals of honor from the war department. The regiment was mustered out on June 22, 1865, at Richmond, Va., under command of Col. Murray. It lost by death during its term of service 4 officers and 95 men killed and mortally wounded; 2 officers and 156 men died of disease and other causes, a total of 267. 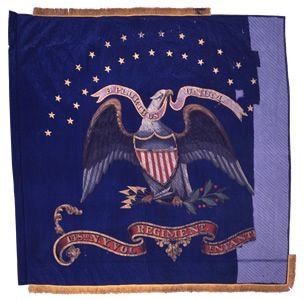 Fuller, M. H. "Camp Naglee" Norfolk, Va. 1863. 148th N.Y. Vols. Col. Wm. Johnson. [New York] : Endicott & Co. lith. 59 Beekman St. N.Y.,1863.
Civil War print of the Union Army encampment surrounding the Norfolk Military Academy building, which flies the U.S. flag. Army tents are pitched in rows around the large Greek Revival school building. Soldiers can be seen standing, talking, cooking over a campfire, and on sentry duty around the building and in front of the camp. In the background are other Norfolk buildings, including two churches with tall spires. In the foreground, African Americans bring supplies balanced on their heads or loaded into carts.
1 print : lithograph, tinted ; image and text 31 x 37 cm., on sheet 33 x 42 cm.
Located at the American Antiquarian Society.

Hoffman, George W. Letter, 15 August 1864.
4 pages. Letter, 15 August 1864, from George W. Hoffman (b. ca. 1842), 148th New York Volunteers near Petersburg, Virginia, to Reuben Reichenbach (b. ca. 1812), Fayette, Seneca County, New York. Hoffman writes about the delays in receiving mail, his illness and confinement at a military hospital, and he describes the underground mining of Confederate lines, later known as the Battle of the Crater, and the large number of troop losses on both sides. Hoffman also offers his sympathy concerning the death of Reichenbach’s son Philip (ca. 1843-1864).
Accession 43041. Located at the Library of Virginia in Richmond, Virginia.
Thank you to Ed Worman for pointing out this resource.

Hoster, John L.. Correspondence of John L. Hoster, 1860-1867.
88 items.
Hoster writes to his sweetheart, Josephine (Josie) Cole, describing action of the 148th in Virginia, particularly around Porthsmouth, Norfolk, Yorktown and Williamsburg. He discusses life in camp and freqeuntly mentions low moral character of Union soldiers and Southern civilians. Several letters mention African Americans, including a description of a church service. There are references to the progress of the war and prominent generals. A letter to a Mr. andd Mrs. Vincent concerns the death of their son, George, in Andersonville. Josie's letters describe daily life in Seneca County, N.Y. A few pre-war letters refer to schooling and one refers to "excitement about South Carolina and secession."
Located at the University of Virginia.

Hoster, John L. John L. Hoster diary,1862-1865.
The collection consists of a bound typescript copy (137 pages) of the diary of John L. Hoster with entries between September 22, 1862 and April 14, 1865. Hoster's diary chronicles his military service and imprisonment (June - September 1864), his move to Charleston and Florence, South Carolina, then to Goldsboro, North Carolina, and his exchange near Wilmington, North Carolina. There are regular daily entries, some of considerable fullness, during the months at Andersonville, giving details about food, health, morale, and general treatment at Andersonville. His comments are restrained and remarkably detached. He thought Savannah a pretty place and was grateful to the citizens of Charleston for their kindness to the prisoners, particularly the sick.
1 bound volume.
Located at Emory University.

Peck, Henry J. 148th New York Infantry, Co. I. Correspondence (1864-1865).
1 box (.25 cu. ft.).
A group comprised of letters between Henry J. Peck and his wife, Mary, while he served in the army. Peck's letters discuss his involvement with the company band, his experiences of life in an army camp, and the rigors of long marches. He also recorded the events and emotions of the Confederate Army surrender at Appomattox Court House. Mary Peck's letters provide information about life on the homefront as well as the experiences of a soldier's wife.
Located at the New York State Library Manuscripts and Special Collections.
Copies are available at the New York State Military Museum.

Stubbs, George.  Letters,1864.
4 AlsS (autograph letters signed)to his sister, Eli Jefferson -- 2 ALsS from his sister to George Stubbs -- 3 ADs one of which is a death notice (1865 March 30,. Letters describe battles and camp life of a Union soldier. letters posted from camps near Bermuda Hundred, Point of Rocks and the James River.
9 items (in folder) ; 26 x 38 cm. + 3 envelopes.
Located at the Boston Public Library.

Wright, Russell F. Letters, 1863-1864.
36 pages.
Letters, 1863-1864, of Russell F. Wright (ca. 1834-1864) of Company K, 148th New York Infantry, to Euphemia O. Gillet of Ontario and Broome Counties, New York, detailing camp life and campaigning in and around Norfolk, Yorktown, and Richmond, Virginia, as well the battle of Cold Harbor and the siege of Petersburg, Virginia. Wright asks about Euphemia’s health and comments on her brother Charlie serving in the same company. A couple of letters have coded messages.
Accession 45311. Located at the Library of Virginia in Richmond, Virginia.
Thank you to Ed Worman for pointing out this resource.