The following is taken from New York in the War of the Rebellion, 3rd ed. Frederick Phisterer. Albany: J. B. Lyon Company, 1912.
August 8, 1862, Capt. Hiram Smith received authority to recruit this regiment; it was organized at Rochester with Patrick H. O'Rorke as Colonel, and there mustered in the service of the United States for three years September 13, 1862. June 26, 1863, the three years' men of the13th Infantry, and October 6, 1864, the members of the 44th Infantry, not mustered out with their regiments, were transferred to it. June 3, 1865, the men not to be mustered out with it were transferred to the 5th Veteran Infantry.
The companies were recruited principally: A at Brockport; B, C, E, F and K at Rochester; D at Rochester, Brighton, Gates, Penfield and West Webster; G at Rochester and Churchville; H at Rochester, Brockport and Fairport; and I at Chili, Greece, Penfield, Rochester, Ogden, Henrietta and Parma.
The regiment left the State September 19, 1862; it served in the Provisional Brigade, Casey's Division, defenses of Washington, from September, 1862; in the 2d Brigade, 2d Division, 12th Corps, from October, 1862; in the 3d Brigade, 2d Division, 5th Corps, from November, 1862; in the 1st Brigade, 1st Division, 5th Corps, from March, 1864; in the 1st Brigade, 2d Division, 5th Corps, from June 6, 1864; and, under Col. W. S. Grantsyne, it was honorably discharged and mustered out June 3, 1865, near Alexandria, Va.
During its service the regiment lost by death, killed in action, 4 officers, 86 enlisted men; of wounds received in action, 4 officers, 46 enlisted men; of disease and other causes, 2 officers, 169 enlisted men; total 10 officers, 301 enlisted men; aggregate, 311 of whom 1 officer, 78 enlisted men, died in the hands of the enemy.

The following is taken from The Union army: a history of military affairs in the loyal states, 1861-65 -- records of the regiments in the Union army -- cyclopedia of battles -- memoirs of commanders and soldiers. Madison, WI: Federal Pub. Co., 1908. volume II.
One Hundred and Fortieth Infantry.—Cols., Patrick H. O'Rorke, George Ryan, Elwell S. Otis, William S. Grantsyne; Lieut.-Cols., Louis Ernest, Isaiah F. Force, Elwell S. Otis, William S. Grant-syne, W. James Clark; Majs., Milo L. Starks, Benjamin F. Harman, William J. Clark, Willard Abbott, Isaiah F. Force. The 140th, the "Rochester Racehorses," was recruited in Monroe county, organized at Rochester, and there mustered into the U. S. service on Sept. 13, 1862, for three years. In June, 1863, it received by transfer the three years men of the 13th N. Y., and in Oct., 1864, the veterans and recruits of the 44th. The regiment left the state on Sept. 19, 1862, proceeded to Washington and joined the Army of the Potomac in November, being assigned to the 3d (Warren's) brigade, 2nd (Sykes') division, 5th corps. With this command it was under fire for the first time at the battle of Fredericksburg, where it lost a few men wounded and missing. The 5th corps was only partially engaged at Chancellorsville, though the I40th lost 21 killed, wounded and missing in that disastrous battle. Describing this gallant, fighting regiment, Col. Fox says: "Col., O'Rorke was killed at Gettysburg while leading his men into action on Little Round Top, where their prompt action aided largely in seizing that important position, the regiment losing there 26 killed, 89 wounded and 18 missing. The 140th was then in Ayres' division—the division of regulars. In 1864 the regulars were brigaded in one command under Ayres, and the 140th was placed in the same brigade; the division was commanded by Gen. Charles Griffin. But in June, 1864, the regiment was transferred to the 1st Brigade of Ayres' (2nd) division. This brigade was commanded in turn by Col. Gregory, Gen. Joseph Hayes, Col. Otis, and Gen. Winthrop. The latter officer fell mortally wounded at Five Forks. The regiment was in the hottest of the fighting at the Wilderness and suffered severely there, losing 23 killed, 118 wounded and 114 captured or missing; total, 255. Three days later it was engaged in the first of the series of battles at Spbttsylvania, in which action Col. Ryan and Maj. Starks were killed. At Spottsylvania the casualties in the regiment were 12 killed and 48 wounded; and at the Weldon railroad, 4 killed, 19 wounded and 51 captured or missing. The regiment was composed of exceptionally good material; the men were a neat, clean lot, and in their handsome Zouave costume attracted favorable attention wherever they appeared." The 140th took part in nearly all the great engagements of the Army of the Potomac from Fredericks-burg to the close of the war. It was actively engaged at Chancellorsville, Gettysburg, Wilderness, Spottsylvania, Bethesda Church, siege of Petersburg, Weldon railroad, Poplar Spring Church, Hatcher's run, White Oak road and Five Forks, It was present at Fredericksburg, Bristoe Station, Rappahannock Station, in the Mine Run campaign, North Anna, Totopotomy, White Oak swamp and Appomattox. Other important losses incurred besides those above detailed were, 60 wounded and missing at Bethesda Church; 22 killed, wounded and missing in the first assault on Petersburg; 23 killed and wounded at Hatcher's run; and 57 killed, wounded and missing during the final Appomattox campaign. Col. O'Rorke, when he was killed at Gettysburg, was mounted on a rock at Little Round Top, cheering on his men. He graduated at the head of his class at West Point in 1861 and was only 25 years of age when killed. The regiment was mustered out June 3, 1865, near Alexandria, Va., under Col. Grantsyne. Its total enrollment during service was 1,707, of whom 533 were killed and wounded; 8 officers and 141 men were killed and died of wounds; 2 officers and 168 men died of disease and other causes; total deaths, 319, of whom 77 died in Confederate prisons. 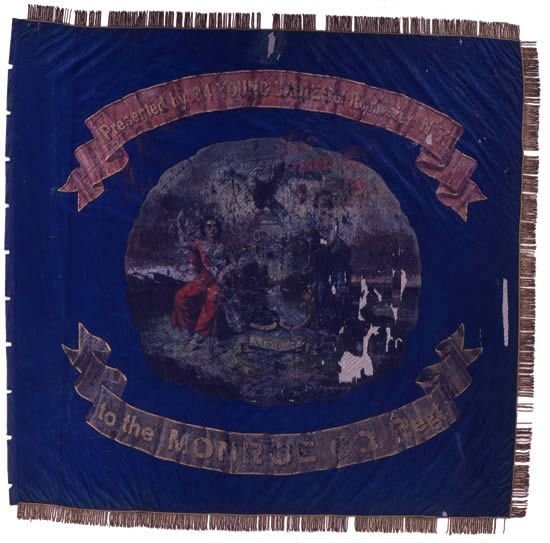 In September 1862 the 140th Regiment NY Volunteer Infantry received this painted silk regimental color from a group of young ladies from Rochester.… 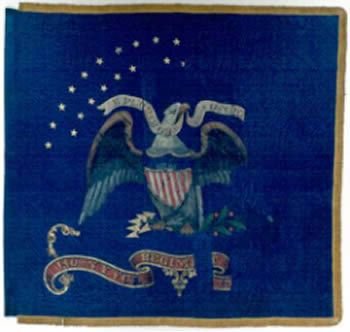 Civil War Newspaper Clippings
This is also available in PDF format. hese are large files; however, they are exact images of the pages.

Badger, Alfred Mason. Papers of Alfred Mason Badger,1832-1863.
Diary (1832-1836) documenting Badger's merchant and building contracting businesses in Georgetown, Washington, D.C., and Boston, Mass., and reflecting the growth of the nation's capital (1832-1833); letters from Badger to his family while on a trip in New England (1868); his obituary (1868); genealogies of the Badger family (1635-circa 1949), of the Beck family (1743-circa 1860), and of the Hamden family (1666-circa 1909); and a scrapbook of poems. Also includes Civil War letters from Badger's son, Frank Appleton Badger, 140th New York Volunteers, and from his nephew, Hamlet F. Richardson, 108th New York Volunteers, and photographs of the two soldiers.
50 items. 1 container.
Located at the Library of Congress, http://lccn.loc.gov/mm79011528
Rochester Public Library also has ledger books of Mason.

Bennett, Brian A. "The Supreme Event in its Existence : The 140th New York on Little Round Top." Gettysburg: Historical Articles of Lasting Interest 3 (July 1990) 17-25.

Brown, Orsell Cook. Papers (1861-1881).
Comprised chiefly of letters written by Brown to his sister in Ashville, New York., about battles and campaigns at Antietam, Fredericksburg, Chancellorsville, Gettysburg, and theWilderness. His letters are well written and quite detailed in regards to his observations and experiences. Also includes a photo album containing pictures of many fellow soldiers in the 44th New York Volunteers. Finding aid available.
3 boxes (1 cu. ft.).
Located at the New York State Library Manuscripts and Special Collections.

Houck, John L. Papers (1863-1865).
These papers consist mostly of letters regarding Houck's experiences as musician for the U.S. Army during the Civil War. They provide information on performances, practice sessions, and other activities. Finding aid available.
1 box (65 items).
Located at the New York State Library Manuscripts and Special Collections.

Sizer, August Friederich and Charles Edward Sizer. Civil War experiences of a Rochester soldier.
Notes written in the field and mailed home by August Friederich Sizer were translated and typed after his death in 1904 by his son, who added a short biographical sketch in the foreward. [19] leaves ; 31 cm.
Located at the Rochester Public Library.