The following is taken from New York in the War of the Rebellion, 3rd ed. Frederick Phisterer. Albany: J. B. Lyon Company, 1912.
Colonel David Ireland received authority, August 31, 1862, to recruit this regiment; it was organized at Binghamton, and there mustered in the service of the United States for three years September 25 and 26, 1862. In December, 1864, a company of recruits, mustered in for one year, joined the regiment at Savannah, Ga., and became Company L. Tune 8, 1865, the men not to be mustered out with the regiment were transferred to the I02d Infantry.
The companies were recruited principally: A at Binghamton and Sanford; B at Binghamton, Chenango, Conklin, Kirkwood, Richford, Union and Windsor; C at Owego; D at Ithaca; E at Binghamton, Chenango, Lisle, Maine, Triangle, Union and Whitney's Point; F at Binghamton, Colesville, Chenango, Conklin, Kirkwood, Port Crane, San-ford and Windsor; G at Berks-hire, Richford, Newark Valley, Caroline, Groton and Candor; H at Spencer, Candor, Barton and Owego; I at Ulysses, Newfield and Ithaca; K at Groton, Danby and Caroline; and L at Elmira.
The regiment left the State September 27, 1862; it served in the 3d Brigade, 2d Division, 12th Corps, from September 30, 1862; in the 3d Brigade, 2d Division, 2Oth Corps, from April, 1864; and it was honorably discharged and mustered out, under Col. Koert S. Van Voorhees, June 9, 1865, near Bladensburg, Md.
During its service the regiment lost by death, killed in action, 4 officers, 73 enlisted men; of wounds received in action, 2 officers, 43 enlisted men; of disease and other causes, 4 officers, 165 enlisted men; total, 10 officers, 281 enlisted men; aggregate, 291; of whom 8 enlisted men died in the hands of the enemy.

The following is taken from The Union army: a history of military affairs in the loyal states, 1861-65 -- records of the regiments in the Union army -- cyclopedia of battles -- memoirs of commanders and soldiers. Madison, WI: Federal Pub. Co., 1908. volume II.
One Hundred and Thirty-seventh Infantry.—Cols., David Ireland, Koert S. Van Voorhes; Lieut.-Cols., Koert S. Van Voorhes, Milo B. Eldridge; Majs., Wetsell Willoughby, Milo B. Eldridge, Frederick A. Stoddard. This regiment, recruited in the counties of Tompkins, Tioga and Broome—the 24th senatorial district—was organized at Binghamton, and was there mustered into the U. S. service for three years on Sept. 25-26, 1862. It left on the 27th, 1,007 strong, for Harper's Ferry, and was there assigned to the 3d brigade, 2nd (Geary's) division,—the "White Star" division—12th corps, to which it was attached throughout the whole period of its active service. The list of important battles in which the regiment took part includes Chancellorsville, Gettysburg, Wauhatchie, Missionary ridge, Lookout mountain, Ringgold, Rocky Face ridge, Resaca, Cassville, Lost mountain, Kennesaw mountain, Peachtree creek, the siege of Atlanta, and numerous minor actions on the march to the sea and in the campaign of the Carolinas. Col. W. F. Fox, in his account of this regiment, says: "It won special honors at Gettysburg, then in Greene's brigade, which, alone and unassisted, held Culp's hill during a critical period of that battle against a desperate attack of vastly superior force. The casualties in the 137th at Gettysburg exceeded those of any other regiment in the corps, amounting to 40 killed, 87 wounded and 10 missing. The gallant defense of Culp's hill by Greene's brigade, and the terrible execution inflicted by its musketry on the assaulting column of the enemy, form one of the most noteworthy incidents of the war. The 12th corps left Virginia in Sept., 1863, and went to Tennessee, joining Grant's army at Chattanooga. In the month following their arrival the regiment was engaged in the midnight battle at Wauhatchie, where it lost 15 killed and 75 wounded; and, a few weeks later, fought with Hooker at Lookout mountain in the famous 'battle above the clouds;' casualties in that battle, 6 killed and 32 wounded. In April, 1864, the corps number was changed to the 20th, Gen. Hooker being placed in command. A large accession was received from the nth corps, but Col. Ireland and Gen. Geary retained their respective commands. The 137th shared in all the marches and battles of the Atlanta campaign, and then marched with Sherman to the sea." Col. Ireland succumbed to disease at Atlanta, and Col. Van Voorhes succeeded to the command. When the campaign of the Carolinas closed with the surrender of Johnston, the regiment marched with the corps to Washington, where it participated in the grand review and was mustered out near Bladensburgh, Md., June 9, 1865. The total enrollment of the regiment was 1111, of whom 6 officers and 121 men, were killed and mortally wounded—11.4 per cent. of the enrollment; 4 officers and 167 men died of disease, accidents, and all other causes, a total of 294. The total number of killed and wounded was 490. 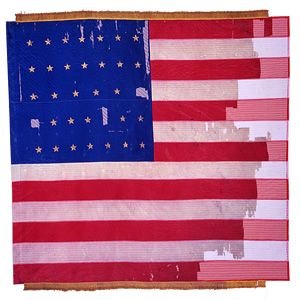 This silk national color carried by the 137th New York Volunteers includes 31 gold-colored, painted stars in the canton from an original 34-star…

Inquiries Relating to the Formation and Movements of Regiments, Companies, or Batteries of New York Volunteers, Submitted by the Bureau of Military Record

History of the Three Colors

Bloomer, Hiram. Letter, 1863 May 23.
Letter written at camp near Aquia Creek, Virginia that contains news about Company I in the aftermath of the battle at Chancellorsville, Virginia. Bloomer wrote about missing the battle, having rejoined the Company as they were retreating. He noted there were few casualties among the men of Company I. He also discussed the fate of fellow soldier, William E. Hopkins, who was captured in action at Chancellorsville.
1 item.
Located at the New York State Library Manuscripts and Special Collections.

Fennell, Charles C. Battle for the barb :the attack and defense of Culp's Hill on July 2, 1863. Gettysburg, Pa. : Friends of the National Parks at Gettysburg, 2001.

Hazard, George Riley. Papers,1865-1919.
The collection contains George Hazard's official Civil War service papers and diary in photocopy and the original of a drawing of Jeffersonville Army Hospital and grounds in Jeffersonville, Ind. The diary also mentions the hospital.
1 folder.
Located at the Indiana Historical Society.

Jeffers, Ira S. Letter, 11 May 1863
4 pages.
Letter, 11 May 1863, from Ira S. Jeffers (1843-1932), Company F, 137th New York Infantry, encamped at Aquia Landing in Virginia, to his sister Catherine Jeffers, Binghamton, Broome County, New York, concerning the Battle of Chancellorsville and including descriptions of the battle and wounded men. Also includes a typed transcript of the letter.
Accession 40908. Located at the Library of Virginia in Richmond, Virginia.
Thank you to Ed Worman for pointing out this resource.

Jennings, Hudson. 137th New York Infantry, Co.K.Letters (1862-1863).
Letters sent to Jennings' sister regarding his experiences of military life. In particular, he comments on the primitive conditions of army camps and the long arduous marches each day. He also mentions the battles at Chancellorsville and Gettysburg.
8 items.
Located at the New York State Library Manuscripts and Special Collections.

Scofield, William S.  William H. Scofield letters,1865.
This collection consists of photocopies of four letters from William H. Scofield to his father and sister. All of the letters, written from Savannah, 1865, concern Scofield's role in the march from Atlanta to Savannah. In the first letter, Scofield describes his march from Atlanta to Savannah and remarks on the kindness of the residents of Savannah. In the second letter, he states that he does not want to leave Savannah, a beautiful city, but that he has been ordered into South Carolina; he also notes that the weather is more like a northern spring that winter (the letter was written in January). Scofield writes to his father "Camp in the pines, three miles from Sister's Ferry, Savannah River, Georgia," in the third letter, explaining that he thinks his troops should have been permitted to remain and guard Savannah since they captured the city. He warns the people of South Carolina to beware of the invading "Yankees" (to whom he belongs). The fourth letter reveals that all the troops are elated over the recent peace terms and everyone is anxious to return home.
1 folder (.05 cubic feet).
Located at the Georgia Historical Society.

Willson, Lester S. (Lester Sebastian), Lester S. Willson diaries, 1863-1865.
Description: 2 v. and laid-in documents (0.2 linear ft.)
The first volume of Willson's diaries contains entries made from 3 July 1863 to 5 Sept. 1864, with substantial gaps. Willson's terse entries describe his final days at Canton, N.Y., recuperating from a wound he received at Chancellorsville up to his reunion with the 60th New York Infantry in northern Virginia on 11 July 1863. The diary resumes on 26 June 1864 as Willson's regiment prepared to move on Confederate positions guarding the approaches to Atlanta through their subsequent capture of the city. These entries cover in some detail the construction of field works and battle actions at Peach Tree Creek. The second diary begins on 3 Nov. 1864 and ends on 2 May 1865, again with substantial gaps. Willson records his experiences on Gen. William T. Sherman's march from Atlanta to Savannah on the Georgia coast. The actual surrender of Savannah was not recorded by Willson, but the subsequent march from that city to Columbia, S.C., received many entries. The diary concludes with the 60th New York on their campaign into North Carolina and the surrender of the Confederate army of Gen. Joseph E. Johnston. Willson describes the logistics of marching with Sherman's army, the destruction of property by Union troops, and the liberated slaves who accompanied the army. As a staff officer, Willson also touches on the arguments and in-fighting among officers on matters of promotion and command organization. A folder of laid-in material from the second diary consists of numerous receipts for the shipment of bodies home from the front, regimental record notes, and an original hand signed battle report by Col. Abel Goddard, 60th New York Infantry, for his regiment's part in the battle of Resaca, Ga., on 15 May 1864. Officers mentioned most frequently in Willson's diaries include Goddard, Col. David Ireland, 137th New York Infantry, and Capt. Loren Tuller, 60th New York Infantry.
Finding aid available at http://www.lib.montana.edu/collect/spcoll/findaid/2508.php