The following is taken from New York in the War of the Rebellion, 3rd ed. Frederick Phisterer. Albany: J. B. Lyon Company, 1912.
Colonel Leonard D. H. Currie received authority to raise this regiment as one of the Metropolitan Brigade; it was organized on Staten Island and there mustered in the service of the United States for three years September 24, 1862. May 31, 1865, the men not to be mustered out with the regiment were transferred to the 90th Infantry.
The companies were recruited under the auspices of the metropolitan police of New York city, principally: A, C, D and E in New York city; B, F, H and K in New York city and Brooklyn, and G and I in Brooklyn.
The regiment left the State October 8, 1862; it served at and near Washington from October, 1862; at New Orleans and Baton Rouge, La., from December, 1862; in 2d Brigade, 3d Division, Department of the Gulf, from January, 1863; in 2d Brigade, 3d Division, 19th Corps, from March, 1863; in the defenses of New Orleans, from October, 1863; in the 3d Brigade, 3d Division, 19th Corps, from February, 1864; in the 1st Brigade, 2d Division, 19th Corps, from April, 1864; in the 3d Brigade, 1st Division, 19th Corps, from June, 1864; in the 3d Brigade, 1st Division, Army of Shenandoah, from March, 1865; in the defenses of Washington, from April, 1865, and, under Colonel Currie, it was honorably discharged and mustered out, June 6, 1865, at Washington, D. C.
During its service the regiment lost by death, killed in action, 1 officer, 26 enlisted men; of wounds received in action, 1 officer, 17 enlisted men; of disease and other causes, 1 officer, 78 enlisted men; total, 3 officers, 121 enlisted men; aggregate, 124; of whom 1 enlisted man died in the hands of the enemy.

The following is taken from The Union army: a history of military affairs in the loyal states, 1861-65 -- records of the regiments in the Union army -- cyclopedia of battles -- memoirs of commanders and soldiers. Madison, WI: Federal Pub. Co., 1908. volume II.
One Hundred and Thirty-third Infantry.—Cols., Leonard D. H. Currie; Lieut.-Cols., James A. P. Hopkins, Anthony J. Allaire; Majs., Abraham S. Relay, John H. Allcott, Anthony J. Allaire, George Washburn. The 133d, the 2nd "Metropolitan Guard," was recruited principally in New York city under the auspices of the Metropolitan police of New York and was organized on Staten island, where it was mustered into the U. S. service for three years on Sept. 24, 1862. It left for Washington on Oct. 8, 1862, and a few weeks later sailed for New Orleans as a part of Banks' expedition. It was assigned to the 2nd brigade, 3d (Emory's) division, 19th corps, and was first under fire at Fort Bisland in April, 1863, when it sustained a loss of 25 killed and wounded. It was engaged without loss at Opelousas and Alexandria; took an honorable and conspicuous part in the siege of Port Hudson, in which it suffered a total loss of 23 killed, 90 wounded and 2 missing, its chief losses occurring in the assaults of May 27 and June 14. After the surrender of Port Hudson, the ensuing 9 months were chiefly spent in post and garrison duty, and in some reconnoissances and expeditions into the enemy's country. It fought at Vermillion and Carrion Crow bayous in Oct., 1863, after which it served in the defenses of New Orleans until March 15, 1864, when it joined the 1st brigade, 2nd (Grover's) division, 19th corps, and started on Banks' Red River campaign, enduring much fatigue and hardship, but sustaining no further losses in battle. It rendered efficient service in building the dam on Red river, which enabled the fleet of ironclads to pass the rapids in May. In July, 1864, it embarked at New Orleans for Washington with the 1st and 2nd divisions of the corps, and participated without loss in the actions at Fort Stevens and Snicker's ferry, Va. It was attached to the 3d brigade, 1st division, Army of the Shenandoah early in the spring of 1865, and after April served in the defenses of Washington, where it was mustered out on June 6, under command of Col. Currie. The regiment lost during service, 2 officers and 43 men killed and mortally wounded; I officer and 78 men died of disease and other causes; total deaths, 3 officers and 121 men. 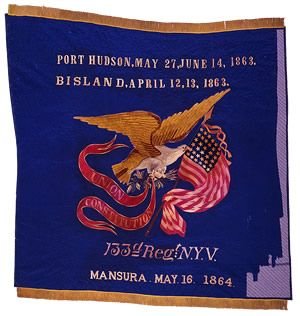