The following is taken from New York in the War of the Rebellion, 3rd ed. Frederick Phisterer. Albany: J. B. Lyon Company, 1912.
Colonel Charles S. Turnbull received, July 12, 1862, authority to raise this regiment in New York city as one of the Metropolitan Brigade; it was organized in New York city, and there mustered in the service of the United States for three years September 6, 1862.
The companies were recruited under the auspices of the metropolitan police, in New York city; but a portion of Company K came from Smithtown.
The regiment left the State September 14, 1862; it served in the Middle Department, 8th Corps, at Annapolis, Md., from September 20, 1862; at New Orleans and Baton Rouge, La., from November, 1862; in the 1st Brigade, Grover's Division, Department of the Gulf, from December, 1862; in 1st Brigade, 4th Division, 19th Corps, from March, 1863; in the 2d Brigade, 2d Division, 19th Corps, from March, 1864; in the defenses of New Orleans, from May, 1864; in the 3d Brigade, 2d Division, 19th Corps, from June, 1864; with the 10th Corps, Army of the James, from July 21-31, 1864; with the Army of the Shenandoah, from October, 1864; in the 3d Brigade, 1st Division, 10th Corps, from April 2, 1865; and, commanded by Col. Nicholas W. Day, it was honorably discharged and mustered out July 26, 1865, at Savannah, Ga.
During its service the regiment lost by death, killed in action, 49 enlisted men; of wounds received in action, 2 officers, 33 enlisted men; of disease and other causes, 3 officers, 107 enlisted men; total, 5 officers, 189 enlisted men; aggregate, 194; of whom 8 enlisted men died in the hands of the enemy.

The following is taken from The Union army: a history of military affairs in the loyal states, 1861-65 -- records of the regiments in the Union army -- cyclopedia of battles -- memoirs of commanders and soldiers. Madison, WI: Federal Pub. Co., 1908. volume II.
One Hundred and Thirty-first Infantry.—Cols., Charles S. Turn-bull, Nicholas W. Day; Lieut.-Cols., Charles C. Nott, Nicholas W. Day, W. M. Rexford; Majs., Nicholas W. Day, W. M. Rexford, Aug. C. Tate, Albert Stearns. This regiment, known as the 1st regiment, Metropolitan Guard, was recruited in New York city under the auspices of the Metropolitan police, and was mustered into the U. S. service for three years on Sept. 6, 1862. The 7th N. Y. militia furnished a large number of its officers. It left the state on Sept. 14, proceeded to Annapolis, Md., and shortly after sailed for Louisiana as part of the Banks expedition. On its arrival at New Orleans it was assigned to the 1st brigade, Grover's division, Department of the Gulf, and after the formation of the 19th corps, to the 1st brigade, 4th (Grover's) division, of that corps. It sustained its first loss—3 wounded—in April, 1863, at Irish bend, and was engaged without loss at Vermillion bayou on the 17th. The following month the investment of Port Hudson was completed and the 131st participated most honorably throughout the siege of that stronghold, in which its losses aggregated 21 killed, 88 wounded and 1.0 missing, most of its losses being sustained in the assaults of May 27 and June 14. After the surrender of Port Hudson it was engaged for several months in post and garrison duty, and in various expeditions and reconnoissances. It lost 55 men killed, wounded and missing at Bayou La Fourche, and was again engaged at Vermillion bayou in October, and at Carrion Crow bayou, but meeting with no loss. In the summer of 1864 it left the Department of the Gulf and joined Gen. Butler's Army of the James at Bermuda Hundred. Shortly after it joined the Army of the Shenandoah under Gen. Sheridan and participated in his brilliant campaign in the Valley. In Grover's division, 19th corps, it lost heavily at the battle of the Opequan, where its casualties amounted to 10 killed and 64 wounded. It was only slightly engaged at Fisher's hill, but at Cedar creek it again suffered severely, losing 33 killed and wounded. It subsequently went to North Carolina, where it was attached to the l0th corps, and in May, 1865, it was ordered to Augusta, Ga. The following month it moved to Savannah, Ga., and was there mustered out, under Col. Day, July 26, 1865. The regiment traveled over 10,000 miles by land and water and returned to the state with only 240 out of 1,000 men with which it entered the service. It lost by death 2 officers and 82 enlisted men killed and mortally wounded; 3 officers and 107 enlisted men died of disease and other causes; total deaths, 194. 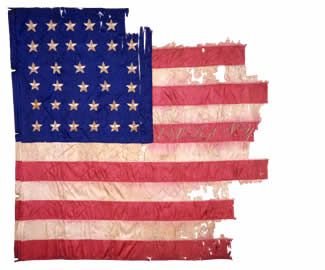 These silk flank markers, reportedly manufactured by Tiffany & Company, were presented to the 131st Regiment NY Volunteer Infantry by Horace Day at… 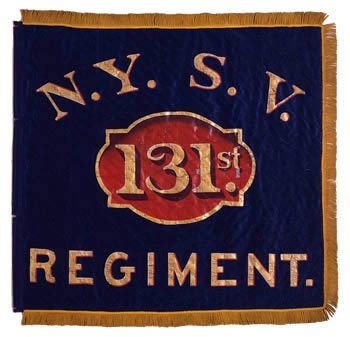