The following is taken from New York in the War of the Rebellion, 3rd ed. Frederick Phisterer. Albany: J. B. Lyon Company, 1912.
Colonel David S. Cowles received authority, July 19, 1862, to raise this regiment in the counties of Columbia and Dutchess; it was organized at Hudson and there mustered in the service of the United States for three years September 4, 1862.
The companies were recruited principally: A at Hudson, Ghent, Chatham, Austerlitz, New Lebanon, Canaan, Germantown and Claverack; B at Washington, Amenia, Dover, Pawling, North East, Stanford and Pine Plains; C at Rhinebeck, Milan, Red Hook, Clinton, Stanford and Hyde Park; D at Poughkeepsie, Hyde Park, Beekman, Fishkill, Pine Plains, Pleasant Valley, Clinton, Livingston, Greenport and LaGrange; E at Kinder-hook, Chatham, Valatie, Hillsdale and Austerlitz; F at Fishkill, Pawling, Pine Plains, North East, Washington, Amenia and Hudson; G at Stuyvesant, Hudson, Ancram, Cler-mont, Taghkanick, Gallatin, Claverack, New Lebanon, Stockport, Ghent and Hillsdale; H at Fishkill, Poughkeepsie, Hyde Park and Beekman; I at Poughkeepsie; and K at Chatham, Hudson, Claverack, Greenport, Hyde Park, Clinton, Germantown, Red Hook and Copake.
The regiment left the State September 5, 1862; it served in the Middle Department, 8th Corps, at and near Baltimore, Md., from September, 1862; at New Orleans, La., from December, 1862; in the 1st Brigade, Sherman's Division, Department of the Gulf, from January, 1863; in 1st Brigade, 1st Division, 19th Corps, from March, 1863; in the 3d Brigade, 3d Division, 19th Corps, from June, 1863; in 2d Brigade, 1st Division, 19th Corps, from July, 1863; in 3d Brigade, 1st Division, 19th Corps, from November, 1863; in 3d Brigade, 2d Division, 19th Corps, from February, 1864; in 3d Brigade, 1st Division, 10th Corps, from April 2, 1865; and it was honorably discharged and mustered out, under Capt. Thomas N. Davis, July 12, 1865, at Savannah, Ga.
During its service the regiment lost by death, killed in action, 2 officers, 41 enlisted men; of wounds received in action, 20 enlisted men; of disease and other causes, 3 officers, 203 enlisted men; total, 5 officers, 264 enlisted men; aggregate, 269; of whom 41 enlisted men died in the hands of the enemy.

The following is taken from The Union army: a history of military affairs in the loyal states, 1861-65 -- records of the regiments in the Union army -- cyclopedia of battles -- memoirs of commanders and soldiers. Madison, WI: Federal Pub. Co., 1908. volume II.
One Hundred and Twenty-eighth Infantry.—Cols., David S. Cowles, James Smith, James P. Foster; Lieut-Cols., James Smith, James P. Foster, Francis S. Keese; Majs., James P. Foster, Edward Gifford, Francis S. Keese, George M. Van Slyck, Robert F. Wilkinson. This regiment, recruited in the counties of Columbia and Dutchess, rendezvoused at Hudson, and was there mustered into the U. S. service for three years, Sept. 4, 1862. The following day it left for Baltimore, whence it sailed for New Orleans a few weeks later. In Jan., 1863, it was assigned to Sherman's division, 19th corps, and was complimented by Gen. Sherman for the success of its first achievement—the capture of a large quantity of property at Gainesville in April. The regiment took a gallant and conspicuous part in the long siege of Port Hudson, fighting desperately during the assaults of May 27 and June 14. The splendid service rendered by the 128th is well attested by its casualties during the siege, which amounted to 22 killed, 100 wounded and 6 missing, a total of 128. Col. Cowles fell while gallantly leading his regiment during the assault of May 27, the command suffering its heaviest losses on this occasion. After the fall of Port Hudson, the regiment was ordered to Baton Rouge, where it arrived on the 22nd after a fatiguing march, and the next 9 months were chiefly spent in post and garrison duty, with occasional reconnoissances and minor expeditions. On March 15, 1864, in the 3d brigade, 2nd (Grover's) division, 19th corps, it started on Banks' ill-fated Red River expedition. During the battle of Cane river crossing, the 128th was the first to cross the river and plant a flag upon the hill. It also made a brilliant charge driving the enemy and taking many prisoners, its loss being 10 killed and wounded. It was also present at Alexandria and Mansura. In July it proceeded with the division to New Orleans, whence it sailed under sealed orders for Washington. On its arrival it was ordered into Maryland to confront Early's invasion and took part in the subsequent famous campaign under Sheridan in the Shenandoah Valley. At the battle of the .Opequan the regiment lost 57 killed, wounded and missing, Maj. Keese and 4 other officers being among the wounded. At Fisher's hill its loss was 20 killed, wounded and missing, and the regiment was handsomely complimented by Gen. Emory for its services. At the battle of Cedar creek it lost 95 killed, wounded and missing. During the next two months it was engaged in garrison duty at Winchester and New Berne, and was ordered to Savannah with its division in Jan., 1865. In March it was ordered to North Carolina, where it was temporarily attached to the 3d brigade, 1st division, l0th corps, participating in the campaign of the Carolinas until Johnston's surrender in April. It returned to Savannah in May and was mustered out in Augusta, Ga., July 12, 1863. The regiment returned home with only 400 men of the original 960 and 173 recruits. It lost during service 2 officers and 61 men killed and mortally wounded; 3 officers and 203 men died of disease and other causes; total deaths, 269, of whom 41 died in the hands of the enemy. 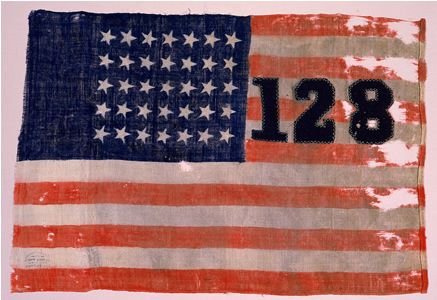 "128th regiment, a complete list [roster] compiled by M. P. Williams, editor Hudson gazette, and revised by the War committee." In The Hudson city and Columbia county directory for the year 1862-3, 178-208.

De Peyster, John Watts. "Address delivered at Hudson county, N.Y., 6th Sept., 1887, by Brevet Major General J. Watts de Peyster, to the 128th regiment, N.Y. vols., on the 25th anniversary of the departure of that regiment for the war."

Guinan, Michael.  Letters, 1862-1864.
Letters of Guinan, an enlisted man with Co. A, 128th Regiment, New York State Volunteers, who participated in the occupation of Louisiana, the siege of Port Hudson, La., and the retreat from the Red River Expedition. Topics include Guinan's unfavorable comparison of New Orleans to New York and unsympathetic views on the black Union troops, enjoyment of Mardi Gras, friends, the situation at home, and news of other men from the Hudson, N.Y., area.
67 items.
Located at the The Historic New Orleans Collection, http://www.hnoc.org/

Hanaburgh, David Henry. History of the One hundred and twenty-eighth regiment, New York volunteers (U. S. infantry) in the late Civil war, by D. H. Hanaburgh, Chairman of the Committee appointed by the Regimental association. Poughkeepsie: [Press of Enterprise pub. co.] 1894.
Available online at http://books.google.com/books?id=aNNYAAAAMAAJ

Moore, M. P. Diary, 1864.
1 v.
Pocket diary kept during his service with Company A, 128th New York Volunteers during the Civil War with entries on the weather, military events, his furlough home, and other events, 1864.
Located at the Daughters of the American Revolution. Hendrick Hudson Chapter, Hudson, NY.

New York (State). Bureau of Military Statistics. Roster of Staff Officers and Enlisted Men of the 128th Regiment, New York Volunteers, 1862-1865.
Quantity: 0.3 cu. ft. (11 volumes)
This series consists of volumes providing the names of enlisted men and officers who constituted the 128th Regiment, New York Volunteers. It is unclear what specific office compiled this roster but it may have been the Bureau of Military Statistics since its enabling legislation directed it to acquire "a record of the services of the several regiments" which fought in the Civil War.
In addition to name, the roster provides: rank; birthplace; date of discharge; wounds received (usually a brief description); date and place of death, if applicable; date deserted, if applicable; promotions received and dates, if applicable; and date of discharge.
Located at the New York State Library Manuscripts and Special Collections.

Van Vort, Charles. Letter, 14 September 1864.
4 pages.
Letter, 14 September 1864, from Charles Van Vort (b. 1845), 128th New York Infantry near Berryville, Virginia, to his uncle. Van Vort provides an excerpt from his diary concerning his unit's skirmishes, picket duty, and the construction of breastworks.
Accession 41188. Located at the Library of Virginia in Richmond, Virginia.
Thank you to Ed Worman for pointing out this resource.