The following is taken from New York in the War of the Rebellion, 3rd ed. Frederick Phisterer. Albany: J. B. Lyon Company, 1912.
Colonel W. R. Pease received authority, July 19, 1862, to recruit this regiment in Oneida county; it was organized at Rome, and there mustered in the service of the United States for three years August 8 to 16, 1862. The men not to be mustered out with the regiment were transferred, June 8, 1865, to the 48th Infantry.
The companies were recruited principally: A at Rome, Utica and Vernon; B at Utica, Camden, Verona and Vienna; C at Utica, Westmoreland, Rome and Bridgewater; D at Whitestown, Sangerfield, Utica, Vienna and New Hartford; E at Rome; F at Oriskany, Trenton, Utica, Floyd, Rome, Steuben and Deerfield; G at Rome, Clayville, Paris and Utica; H at Utica, Vienna, Rome and Camden; I at Rome, Boonville, Ava, Utica, Western and Clayville; and K at Clinton, Remsen, Augusta, Boonville, Deansville, Marshall and Vernon.
The regiment left the State August 22, 1862; served in 2d and 3d Brigades, a battalion in each, defenses of Washington, D. C., north of Potomac, from August 25, 1862; in the defenses of Washington, 3d Brigade, Haskins' Division, 22d Corps, from January, 1863; in the 1st Brigade, 3d Division, 9th Corps, from February, 1863; in the 1st Brigade, Getty's Division, 7th Corps, Department of Virginia, from April, 1863; in Alford's Brigade, l8th Corps, Department of the South, from July, 1863; in Vogdes' Division, 10th Corps, at Folly Island and Little Folly Island, S. C., from October, 1863; in 1st Brigade, 2d Division, 10th Corps, Army of the James, from April, 1864; in 3d Brigade, 3d Division-, 18th Corps, from May 30, 1864; in 1st Brigade, 2d Division, 10th Corps, from June 15, 1864; in same brigade and division of the 24th Corps, from December, 1864; in the same of the Provisional Corps, from March, 1865; and of the 10th Corps, from April 2, 1865; and it was honorably discharged and mustered out, under Col. Rufus Daggett, June 8, 1865, at Raleigh, N. C.
During its service the regiment lost by death, killed in action, 5 officers, 75 enlisted men; of wounds received in action, 3 officers, 54 enlisted men; of disease and other causes, 1 officer, 136 enlisted men; total, 9 officers, 265 enlisted men; aggregate, 274; of whom 21 enlisted men died in the hands of the enemy.

The following is taken from The Union army: a history of military affairs in the loyal states, 1861-65 -- records of the regiments in the Union army -- cyclopedia of battles -- memoirs of commanders and soldiers. Madison, WI: Federal Pub. Co., 1908. volume II.
One Hundred and Seventeenth Infantry.—Cols., William R. Pease, Alvin White, Rufus Daggett; Lieut-Cols., Alvin White, Rufus Daggett, Francis X. Meyer; Majs., Rufus Daggett, Francis X. Meyer, Egbert Bagg. This regiment, recruited in Oneida county in the summer of 1862, rendezvoused at Rome, where it was mustered into the U. S. service from Aug. 8 to 16, for three years, and left the state on Aug. 22. It was stationed at Tenallytown, Md., until April, 1863, when it was ordered to Suffolk, Va., in the 1st brigade, Getty's division, 7th corps, and subsequently participated in the Peninsular campaign of 1863. It was then ordered to join the 18th corps (the 7th corps having been discontinued), Department of the South; later joined Vogdes' division, loth corps, on Folly island, S. C.; and took part in the siege of Fort Wagner and the operations about Charleston harbor. In April, 1864, the regiment was ordered to Virginia, where it joined Gen. Butler's Army of the James, being assigned to 1st brigade, 2nd division, 10th corps. Sailing up the James river, it disembarked at Bermuda Hundred and was engaged at Swift creek, Drewry's bluff and Bermuda Hundred, losing 20 killed, 62 wounded, and 7 missing at Drewry's bluff. Col. White being among the wounded. While at Cold Harbor it was temporarily attached to the 18th corps, but on its return to the James rejoined the 10th corps, and soon after took part in the initial assault on the works of Petersburg, losing 54 in killed, wounded and missing. It was present at the mine ex- plosion, and then recrossing the James fought gallantly at the battle of Fort Harrison, losing 15 killed, 76 wounded and 33 missing. [n the 1st (Curtis') brigade, 2nd (Foster's) division, it was heavily engaged on the Darbytown road, in October, losing 6 killed, 42 wounded, and 4 missing. When the l0th corps was discontinued in Dec., 1864, Curtis' brigade was placed in Ames' (2nd) division, 24th corps, with which the regiment sailed in Butler's expedition o Fort Fisher, N. C., where Cos. B and H captured 230 men of the 10th N. C. reserves during a reconnoissance. Reembarking, the troops returned to Virginia, but were at once ordered back to Fort Fisher, the second expedition being commanded by Gen. Terry. The 117th took a conspicuous and highly honorable part in the final assault on Fort Fisher, sustaining a loss of 92 in killed and wounded. During February it was in the actions at Cape Fear river, Fort Anderson and Wilmington, and in March and April, as part of the provisional corps, it engaged in Gen. Terry's Carolina campaign, which closed at the Bennett house on April 26. The regiment remained on duty at Raleigh, N. C., until June 8, 1865, when it was mustered out under command of Col. Daggett. About 250 recruits and reenlisted men were transferred to the 48th N. Y. During its term of service the regiment lost by death 9 officers and 129 enlisted men killed and mortally wounded; I officer and 136 enlisted men by disease and other causes, a total of 274, of whom 21 died in the hands of the enemy. 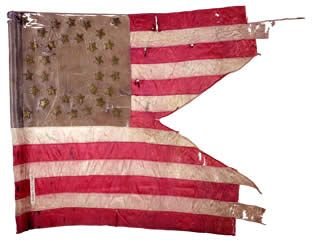 Complete roster of the 117th N.Y. volunteers (Fourth Oneida county regiment), revised April 1, 1914, with a brief historical sketch, giving the name of every one enlisting in the Regiment, the address of survivors, and the date of death of all deceased members so far as can be ascertained. Compiled and published by James J. Guernsey of "E" company. Rome: [1914].

Culver, Milton H. Echoes of sparks from the camp fire of the 117th N.Y. volunteers, from 1862 to 1865, relating a few historical, truthful, thrilling and mirthful incidents as gleaned from the diary of Sergeant M. H. Culver, of E Co. Rome: Guernsey, printer [1917].
Located at the New York Historical Society, New York, NY.

Erwin, Augustus M. Address. Speech made at the National Encampments of the Grand Army of the Republic (G.A.R.) at their twenty-first meeting on September 11, 1888.
Some of his recollections of the Civil War are noted in his hand-written draft.
Online access at: sunsite.utk.edu/civil-war/Erwin_Speech.html [link opens new window]

Fairhead, George B. Photograph of Civil War veteran George B. Fairhead. 1915.
Photograph of George B. Fairhead, who served with Company D, 117th New York Infantry Regiment during the Civil War and was active in the Grand Army of the Republic as a veteran. Fairhead, born in England, came to New York in 1840 and remained a resident of that state the rest of his life. He worked as a minister in the northern part of the state following the war and served as chaplain for the G.A.R. Department of New York. He spent the final years of his life at the Utica City Home for Aged Men and Couples, part of Faxton Hospital. The photograph shows a bust view of an aged and bearded Fairhead in civilian suit. He signed his name and dated the bottom of the photograph on the front. On the back, he wrote a short paragraph praising Faxton Hospital and criticizing the lack of a "Soldier Home" in Oneida County, New York. 0.1 linear ft. (1 folder).
Located at the Wisconsin Veterans Museum Research Center Page.

Hubbard, George A.  George A. Hubbard papers, 1862-1865.
The collection consists of letters, diaries, notes and carte-de-visite photographs, mainly recording George A. Hubbard's Civil War service in the 117th New York Infantry from 1862-1865. Hubbard's diary for 1861 describes his daily life in Sauquoit (Oneida County), New York. His letters, all addressed to his parents, and his remaining diaries, provide detailed description of his daily activities in military service, from camp life to battles. Also present are Hubbard's notes and those of later researchers, and five carte-de-visite photographs of men in military uniform, all identified, three of whom served in the 117th Infantry. 8 linear foot (2 boxes).
Located at the New York Public Library, New York, NY.

Knox, Charles Eugene. Sketch of the life of Captain John J. Knox Williams, oldest grandson of John J. and Sarah A. Knox, who fell in defence of his country at the battle of Chapin's farm, September 29-30, 1864. Prepared by the Rev. Charles E. Knox, and read at the diamond wedding.

Miller Family.  Papers, 1860-1890.
This series is comprised almost entirely of correspondence that would be useful for research on the social life and customs of small towns and rural areas of New York State during the Civil War and subsequent reconstruction period. In particular, the letters addressed to Perry Miller from his siblings while serving in the Union Army, contain not only discussions of their own everyday activities and experiences, but also a considerable amount of news about people and events in the community. Also included is some interesting commentary on the imposition of conscription and reactions to news about various battles. After the war, the letters concern less serious matters, with the bulk of them being love letters written by Perry Miller to his future wife, Phoebe Jaesbury of Catskill, New York. 2 boxes (.75 cu. ft.)
Located at the New York State Library Manuscripts and Special Collections. .

Mowris, James A. A history of the One hundred and seventeenth regiment N.Y. volunteers (Fourth Oneida), from the date of its organization, August, 1862, till that of its muster out, June, 1865, by J. A. Mowris, Regimental Surgeon. Hartford: Case, Lockwood and co., printers, 1866.