The following is taken from The Union army: a history of military affairs in the loyal states, 1861-65 -- records of the regiments in the Union army -- cyclopedia of battles -- memoirs of commanders and soldiers. Madison, WI: Federal Pub. Co., 1908. volume II.
Ninety-seventh Infantry.—Cols., Charles Wheelock, John P. Spofford; Lieut.-Cols., John P. Spofford, Rouse S. Eggleston; Majs., Charles Northrup, Rouse S. Eggleston, Delos E. Hall. The 97th, called the Conkling Rifles, was recruited in Oneida and Herkimer counties and mustered into the U. S. service at Boonville, Feb. 19, 1862, for a three years' term. It left for Washington on March 12; was quartered at Fort Corcoran as part of Gen. Wadsworth's command until May, when it was assigned to the 2nd brigade, 2nd division, Department of the Rappahannock and moved into Virginia, where it occupied various posts in the neighborhood of the Rappahannock river; was engaged at Cedar mountain, and lost 111 in killed, wounded and missing in the Manassas campaign. On Sept. 12, the regiment, which had served with the 3d corps, was assigned to the 1st corps and fought in the 1st brigade, 2nd division at South mountain and Antietam, suffering in the latter battle the most severe loss of any battle of its service—24 killed, 74 wounded and 9 missing. At Fredericksburg the regiment was prominently engaged, but not at Chancellorsville in the following May. It marched with the corps to Gettysburg and distinguished itself by the brilliantly executed capture of the colors of the 20th N. C. and 382 prisoners'. On the southward march it was present at Bristoe Station, and was in the Mine Run movement. While in camp at Brandy station, a sufficient number reenlisted to secure the continuance of the 97th in the field as a veteran regiment. In June, 1864, it was joined by the veterans and recruits of the 83d N. Y. infantry and in August, by the 94th, the 26th N. Y. having already been added to it in May, 1863. During Grant's famous campaign the 97th served in the 3d and 2nd divisions, 5th corps. Its heaviest losses during this campaign and subsequent operations were in the Wilderness, at Spottsylvania and near the Weldon railroad, but it shared in other engagements Of the brigade at the North Anna river, Totopotomy, Cold Harbor, White Oak Swamp, before Petersburg, in the Hicks-ford raid and the Appomattox campaign. It was mustered out near Washington, July 18, 1865, having lost dulring service 182 by death from wounds and 157 by death from accident, imprisonment or dis-ease, of whom 54 died in captivity. 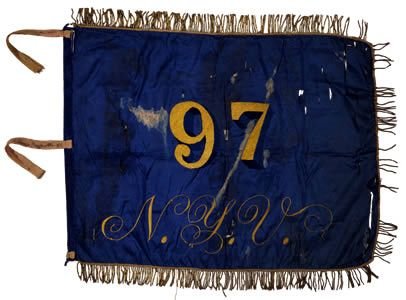 Adsit, James. Letters, 1861-1862.
19 items.
Letters addressed to his wife, in which he complains of his poor health and afflictions from various diseases while encamped in Virginia. On e of the letters describes his wound received in the battle at Antietam, Maryland. Also included are two letters to his wife informing her of his death.
Located at the New York State Library Manuscripts and Special Collections.

Cady, Rush P. Letters of Rush P. Cady.
This is a collection of 90 items including letters written either by or to Lieut. Rush P. Cady (1841-1863) during his service with the 97th New York Infantry Regiment.
Available online at: http://elib.hamilton.edu/hc/hc-main.php?id=col_spe-civ-cad&c=civ_cad

Chamberlain, Henry H. B. Henry H. B. Chamberlain papers. 1863-1898.
5 cubic ft.
Primarily letters written 1864-1868 by Chamberlain to Mary Jane Field of Bridgeport, Connecticut, whom he married in 1864. Includes detailed letters to her written while he was serving with the New York Volunteers 97th Infantry Division and a diary kept from 1863 to 1864 recording his participation in the battles of Pollocks Mill Creek, Va., Petersburg, Va., and Welden Railroad, Va. Also, letters with detailed descriptions of his capture at Gettysburg, his internment at Libby Prison in Richmond, and his subsequent escape and return to action. Letters from after the war, written while he served with Alexander McDowell Cook and the 26th U.S. Infantry on the Texas frontier, include colorful descriptions of military life along the Texas border. Other letters include one written by Chamberlain to his mother; one by Captain Charles F. Dibble to his niece Mary Field (with a postage stamp); and a few to Chamberlain from friends and relatives. Papers include a marriage certificate, commissions, discharge and pension papers of Anson B. Field (probably Mary's brother), a quit claim deed, and probate documents.
Located at Cornell University.

Hough, Franklin Benjamin. History of Duryee's brigade, during the campaign in Virginia under Gen. Pope, and in Maryland under Gen. McClellan, and the summer and autumn of 1862. Albany: J. Munsell, 1864.

Plass, Lewis E. Diary. 1864.
1 item ; 12 cm.
A pocket diary kept by the author while serving in the army during the Civil War. Generally, the daily entries provide a brief summary of his activities and experiences, such as camp life, drill, picket duty, and various campaign and battles, including the Wilderness, Spotsylvania, North Anna River, and Cold Harbor. A tintype photographic portrait of Plass is housed with the diary.
Located at the New York State Library Manuscripts and Special Collections.

Roberts, William Warren. William Warren Roberts Diary.
Digital copy of the diary donated by Priscilla Goss.
Transcribed by Jerrie Hinchman.
Note: The official roster of the 97th does not list any person by the name of William Roberts.
Scan of the original - large file size, 12 MB
Transcription.

Snow, Archibald B. A waif of the Wilderness, a story of the war. Gouverneur: Grand Army Journal presses, 1896.