The following is taken from New York in the War of the Rebellion, 3rd ed. Frederick Phisterer. Albany: J. B. Lyon Company, 1912.
This regiment, Col. Henry M. Baker, originally the Fourth Regiment, Irish Brigade, was recruited under the authority of the War Department, dated August 30, 1861, by Colonel, later Brigadier-General, Meagher; organized by the State December 11, 1861, at Fort Schuyler, by the consolidation of the men enlisted for the Second and Fourth Regiments of the Irish Brigade; mustered in the service of the United States for three years between September, 1861, and January, 1862, and recruited principally: Companies A, B, C, E, F, H and K in New York city; D and I in New York city and Brooklyn, and G in New York city and Jersey City. In June, 1863, the regiment was formed into a battalion of two companies, A being formed of Companies A, B, C, D, E and F, and B of Companies G, H, I and K; in April, 1864, new Companies C, D and E joined the battalion. At the expiration of its term of service, the men entitled thereto were discharged and the regiment.
The regiment left the state December 16, 1861; served in Meagher's Irish Brigade, Sumner’s Division , Army of the Potomac, from December, 1861; in same, 2d, Brigade, and Richardson’s, 1st Division, 2d Corps, Army of the Potomac, from March, 1862; and it was honorably discharged and mustered out, under Lieut. Col. Denis F. Burke, June 30, 1865, near Alexandria, Va.
During it service the regiment lost by death, killed in action, 14 officers, 95 enlisted men ; of wounds received in action, 1 officer and 40 enlisted men; of disease and other causes, 3 officers, 68 enlisted men; total, 18 officers, 203 enlisted men; aggregate, 221; of whom 18 enlisted men died in the hands of the enemy.

The following is taken from The Union army: a history of military affairs in the loyal states, 1861-65 -- records of the regiments in the Union army -- cyclopedia of battles -- memoirs of commanders and soldiers. Madison, WI: Federal Pub. Co., 1908. volume II.
Eighty-eighth Infantry.—Cols., Henry M. Baker, Patrick Kelly, Dennis F. Burke; Lieut-Cols., Patrick Kelly, James Quinlan, John Smith, Dennis F. Burke, John W. Byron; Majs., James Quinlan, William Horgan, John Smith, William G. Hart, John W. Byron. The 88th, the 5th regiment of the Irish brigade, recruited in New York city, Brooklyn and Jersey City, was mustered into the service of the United States at Fort Schuyler, from Sept., 1861, to Jan., 1862, for three years, and left New York for Washington Dec. 16, 1861. Upon its arrival it was attached to Meagher's Irish brigade (for which it was recruited), Sumner's division, and continued in that brigade during its term of service. It served in the vicinity of Washington until the general advance of the army under Gen. McClellan to the Peninsula in March, 1862, when the brigade became a part of the 1st division, 2nd corps. It was present at the siege of Yorktown and the battle of Fair Oaks; lost l29 in killed, wound-ed or missing during the Seven Days' battles; was next active in the Maryland campaign; was in the thick of the battle at Antietam and 102 were killed or wounded; then proceeded to Charlestown, W. Va., and by short marches to Fredericksburg, where it arrived in time to bear an important part in the assault of the 2nd corps during the battle. At Fredericksburg Maj. Horgan and 23 of his comrades were killed, 97 were wounded and 6 missing out of 252 engaged. At Chancellorsville in the spring of 1863, the loss of the regiment was again heavy and it became necessary to consolidate the remaining members into a battalion of two companies before the battle of Gettysburg, where the Irish brigade fought bravely in the wheat-field. The regiment shared in the action of the 2nd corps at Bristoe Station and in the Mine Run campaign, and during the winter a sufficient number of the men reenlisted to retain the 88th in the field as a veteran organization. Three new companies joined the command in April, 1864, and throughout the memorable campaign under Gen. Grant from the Wilderness to Cold Harbor, the 88th continued to serve with unflinching courage. In the first assault on Petersburg, the regiment lost heavily, Col. Kelly, who had succeeded Gen. Meagher in command of the brigade, being killed. The regiment was posted at different points before Petersburg during the siege and participated in siege duties until the fall of the fortifications. It was mustered out at Alexandria, June 30, 1865, having lost 150 by death from wounds and 71 from other causes out of a total strength of 1,352, and having earned the right to be known as a crack fighting regiment. 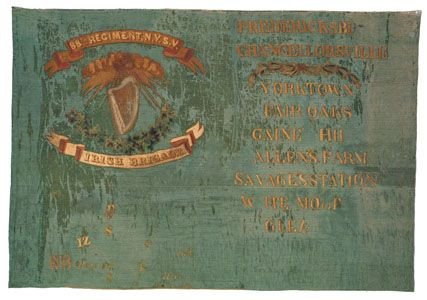 In the autumn of 1862, Tiffany & Co. of New York City produced national colors and green regimental colors, known as “Irish Colors,” for each New York…

Conyngham, David Power. The Irish Brigade and its campaigns : with some account of the Corcoran Legion, and sketches of the principal officers. London : Burns, Oates & Washbourne 1867.

Loback, Tom. Civil War flags of the Irish Brigade and others in the 69th Regiment's Armory collection. S.l. s.n, c1999.