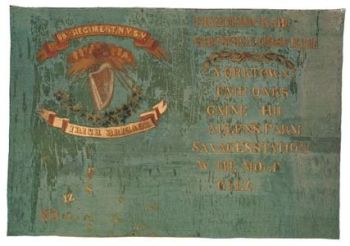 In the autumn of 1862, Tiffany & Co. of New York City produced national colors and green regimental colors, known as “Irish Colors,” for each New York regiment in the “Irish Brigade,” including this flag for the 88th New York Volunteers. Amazingly, on December 15, 1862, the New York regiments received the prized flags during a presentation ceremony shortly after the Battle of Fredericksburg, Virginia, while under intermittent enemy fire and still attending to their wounded. This green silk “Irish Color” presented to the 88th New York Volunteers originally featured the regiment’s battles from 1862, Irish iconography, and a presentation inscription. None of the three New York regiments in the brigade, including the 88th New York Volunteers, carried these presentation flags into battle. Instead, the beautiful banners returned to New York and served as a vital recruitment tool in the city’s Irish-born community. This “Irish Color” presented to the 88th New York Volunteers in December 1862 was restored by Mrs. Amelia Fowler’s patented approach in the early 20th century. A linen backing fabric was prepared and dyed green to match the flag’s ground fabric. The extant pieces of the flag were placed on the linen and stitched down with silk thread using an interlocking buttonhole stitch that created the look of a net. Far less than half the original flag remains.