The following is taken from The Union army: a history of military affairs in the loyal states, 1861-65 -- records of the regiments in the Union army -- cyclopedia of battles -- memoirs of commanders and soldiers. Madison, WI: Federal Pub. Co., 1908. volume II.
Eighty-sixth Infantry.—Cols., Benijah P. Bailey, Benjamin L. Higgins, Jacob H. Lansing, Nathan H. Vincent; Lieut.-Cols., Bar-nard J. Chapin, Benjamin L. Higgins, Jacob H. Lansing, Michael B. Stafford, Nathan H. Vincent, Luzern Todd; Majs., Seyman G. Rheinvault, Benjamin L. Higgins, Jacob H. Lansing, Michael B. Stafford, Nathan H. Vincent, Frederick Van Tine, Luzern Todd, Samuel H. Leavitt. The 86th, known as the Steuben Rangers, was recruited in Steuben, Chemung and Onondaga counties, mustered into the U. S. service at Elmira, Nov. 20 to 23, 1861, and left for Washington on Nov. 23. It passed the first winter in the performance of guard duty at or near Washington and was not ordered to the front until Aug., 1862, when it joined the forces under Gen. Pope and lost 118 in, killed, wounded and missing at the second Bull Run. It then moved to Fredericksburg, participated in the battle there with the 1st brigade, 3d division, 3d corps, and then went into winter quarters near Falmouth. It bore a prominent part in the battle of Chancellorsville, was engaged at Brandy Station, and in the thick of the fight at Gettysburg. Moving southward. via Wapping heights, Auburn and Kelly's ford, no further loss was met with Until the Mine Run campaign, when the regiment lost 32 in the action at Locust Grove. At Brandy Station, where the Army of the Potomac made its winter quarters, a large number of the regiment reenlisted and received their veteran furlough in Jan., 1864, and the 86th continued in the field as a veteran regiment. Camp was broken in April for the Wilderness campaign, the regiment being assigned to the 1st brigade, 3d division, 2nd corps, with which it fought through all the battles of that memorable advance toward Richmond, meeting its heaviest loss at the Po river, where 96 were killed, wounded or captured. It accompanied its brigade and division to Petersburg, shared in the first assault, the engagements at the Weldon railroad, Deep Bottom, Strawberry Plains, Poplar Spring Church, the Boydton road, the Hicksford raid, Hatcher's run and in the Appomattox campaign, winning renown as a fighting regiment. It was commonly named "The fighting regiment of the Southern Tier." Out of a total enrollment of 1,318, the regiment lost 98 killed in action, 73 died from wounds, and 153 from other causes during service. The loss in officers was also heavy. Lieut.-Col. Chapin was killed and Maj. Higgins severely wounded at Chancellorsville, and Lieut.-Col. Stafford fell before Petersburg. 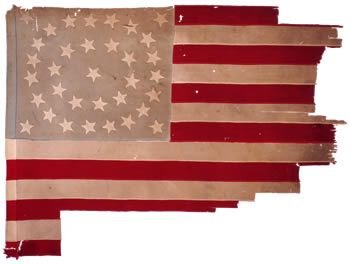 The “ladies of Addison” presented this flag to Company B, which was recruited in Addison. After company commander Captain William Angle suffered a… 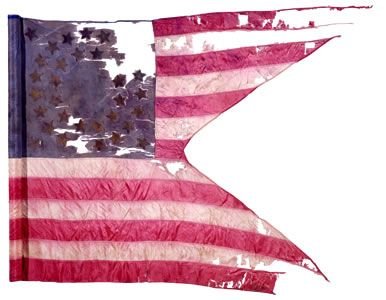