The following is taken from New York in the War of the Rebellion, 3rd ed. Frederick Phisterer. Albany: J. B. Lyon Company, 1912.
The 79th Regiment Militia, failing to be ordered to the front for three months, organized, under authority from the War Department, as volunteers at New York city, where, commanded by Lieut-Col. Samuel MeKenzie Elliott, it was mustered in the service of the United States for three years May 29, 1861. The men were recruited principally in New York city; the regiment was turned over to the State in September, 1861, and received its numerical designation December 11, 1861. In January, 1864, members of the 51st Infantry, and of the 45th, 50th and 100th Pa. Volunteers, were attached to the regiment, serving with it about two months. May 4, 1864, Col. Samuel McK. Elliott received authority to recruit a regiment, the Cameron Highlanders; this authority was modified to recruit for this regiment. May 13, 1864, the men not entitled to be mustered out were formed into two companies, A and B; those entitled to be mustered out at the expiration of the term of service of the regiment proceeded to New York city and were there discharged, under Lieut.-Col. John More, May 31, 1864. In November, 1864, the men enlisted by Colonel Elliott joined the companies in the field as Companies C and D; in January, 1865, another company, E, joined, and in March, 1865, Company F was organized in the field from recruits received.
The regiment left the State June 2, 1861; served at and near Washington, D. C, where Col. J. C. Cameron joined it, from June, 1861; in 3d Brigade, 1st Division, Army N. E. Virginia, from July, 1861; in Stevens' Brigade, Smith's Division, Army of Potomac, from October, 1861; in 2d Brigade, T. W. Sherman's Expeditionary Corps, from October 21, 1861; in 2d Brigade, 2d Division, Department South, from June, 1862; in 3d Brigade, 1st Division, 9th Corps, from July, 1862; in 1st Brigade, 1st Division, 9th Corps, from September, 1862; in the 3d Brigade, 1st Division, 9th Corps, from, June, 1863; in the 1st Brigade, 1st Division, 9th Corps, from July, 1863; in 2d Brigade, 3d Division, 9th Corps, from March, 1864; Companies A and B with 18th Corps, Army of the James, from May, 1864; in 1st Brigade, 1st Division, 9th Corps, Army of Potomac, from September 10, 1864; as Provost Guard, 9th Corps, from October 7, 1864; and it was honorably discharged and mustered out, commanded by Lieut.-Col. Henry G. Heffron, July 14, 1865, near Alexandria, Va.
During its service the regiment lost by death, killed in action, 2 officers, 83 enlisted men; of wounds received in action, 1 officer, 30 enlisted men; of disease and other causes, I officer, 82 enlisted men; total, 4 officers, 195 enlisted men; aggregate 199; of whom 11 enlisted men died in the hands of the enemy; and it, or portions of it.

The following is taken from The Union army: a history of military affairs in the loyal states, 1861-65 -- records of the regiments in the Union army -- cyclopedia of battles -- memoirs of commanders and soldiers. Madison, WI: Federal Pub. Co., 1908. volume II.
Seventy-ninth Infantry.—Cols., J. C. Cameron, Isaac I. Stevens, Addison Farnsworth, David Morrison; Lieut-Cols., David Morrison. John Morse, Henry G. Heffron; Majs., Francis L. Hagadorn, William St. George Elliott, John More, William Simpson, Andrew D. Baird. This regiment, called the Highlanders, was the original 79th militia and was composed mainly of Scotchmen. It was mustered into the service of the United States at New York city, for a three years' term, May 29, 1861, and left for Washington on June 2. It was stationed in the vicinity of Washington until the movement of the army to Manassas, when it was assigned to the 3d brigade, 1st division, Army of Northeastern Virginia and participated in the battle of Bull Run. This, the first battle of the regiment, was a severe initiation, for the command lost 198 in killed, wounded and missing, Col. Cameron being mortally wounded. During September the regiment was posted near Lewinsville, Va., where it several times encountered the enemy and was engaged in a sharp skirmish at Bailey's cross-roads. On Oct. 21, the 79th was attached to the 2nd brigade of Sherman's expeditionary corps, with which it embarked for Hilton Head, S. C., and served in that vicinity until June, 1862. It shared in the gallant attack of Stevens' division, at Secessionville, losing no out of 474 engaged. In July, the troops returned to Virginia and shared in Gen. Pope's campaign, with the 3d brigade, 1st division, 9th corps, losing 105 killed, wounded or missing during the engagements near Manassas. At Chantilly, Gen. Stevens, former colonel of the 79th, was killed. The regiment was active at South mountain, Antietam, and Fredericksburg, but was not closely engaged in the last named battle. It shared the discomforts of Burnside's "Mud March," returned to camp at Fal-mouth, and moved west with the 9th corps, to join Gen. Grant's forces before Vicksburg. The regiment took part in the siege and in the pursuit to Jackson. It then fought at Blue Springs, at Campbell's station, Tenn., and aided in the defense of Knoxville. The men bore uncomplainingly the hardships of the return of the 9th corps across the mountains to Virginia and in May, Cos. A and B were transferred to the 18th corps. The regiment shared the opening battles of the Wilderness campaign and was mustered out at the expiration of its term of enlistment, May 31, 1864. The veterans and recruits served as provost guard at corps headquarters and were reinforced in the autumn of 1864 by the addition of several companies of new recruits. This battalion served before Petersburg until the fall of the city and was mustered out at Alexandria, Va., July 14, 1865. The total enrollment of the regiment was 1,385, exclusive of the battalion organized in 1864, and it lost during service 116 by death from wounds and 83 from other causes. Its record is one of unfailing heroism and devotion to the cause for which it fought and it is ranked by Col. Fox among the "three hundred fighting regiments." 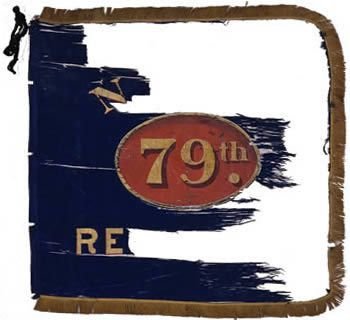 The 79th Regiment, or “Highlanders,” mustered into service for three years on May 29, 1861, and received its numerical designation on December 11,… 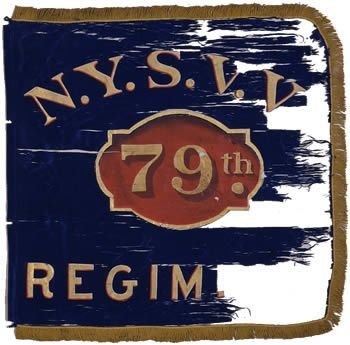 The 79th Regiment, or “Highlanders,” mustered into service for three years on May 29, 1861. When their three year term expired, those entitled were… 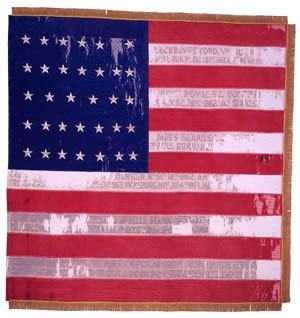 According to a presentation plate attached to the flag's staff, the 79th Regiment received this silk national color from the City of New York in 1863.…

Baird, Andrew. Papers, 1860-1913.
Description: 500 items.
Abstract: Nearly all the papers concern the wartime activities of the 79th Regiment, including muster rolls, orders, and supply lists. There are a few letters and legal documents from the postwar era.
Located at the Brooklyn Historical Society, Brooklyn, NY.

Fitch, Andrew T. Letters, 1862-1865.
14 leaves.
Letters, 1862-1865, from Andrew T. Fitch, surgeon with the 79th New York Infantry, to his father. Letters, written from Fredericksburg, Virginia and vicinity, Columbia, Adair County, Kentucky, and Petersburg, Virginia, discuss the regiment’s movements and describe marches and camp life. Also, Fitch recounts the opposition facing the Union army at Fredericksburg, the regiment’s activities in Kentucky in June 1863, the rejoicing over the capture of Fort Fisher, North Carolina in January 1865, and the daily artillery barrages at Petersburg. The last two letters are written from the Hospital, 1st Division, 9th Corps, near Petersburg, nearly seven months after the 79th New York Highlanders were mustered out of service.
Accession 38680. Located at the Library of Virginia in Richmond, Virginia.
Thank you to Ed Worman for pointing out this resource.

Heffron, Henry G. Papers (1862-1863).
Description: 2 Items
Abstract: Contents include a letter of July 23, 1863 that provides a good description of the Battle of Jackson (Miss.) and subsequent Union Army occupation of the city. Also included is an original copy of Heffron's commission as first lieutenant, January 19, 1862.
Located at the New York State Library Manuscripts and Special Collections.

Kane, John. "Letter to Simon Cameron concerning the service and death of his brother, Col. James Cameron, who died at Bull Run."