This regiment, Col. Thomas J. Parker, was organized by the State November 13, 1861, at Elmira, and there mustered in the service of the United States for three years, in December, 1861. The 64th State Militia formed the nucleus of the regiment. At the expiration of its term of service, the men entitled thereto were discharged in September and October, 1864, and the regiment retained in service, but at the same time consolidated into a battalion of six companies, A, B, D, E, G and H.
The companies were recruited principally: A at Gowanda; B at Randolph; C at Otto; D at Rushford; E at Ithaca; F at Little Valley; G at Wellsville; H at Owego; I at Olean, and K at Leon.
The regiment left the State December 10, 1861; served in the Provisional Brigade, Casey's Division, Army of the Potomac, from January, 1862; in Howard's, 1st, Brigade, Richardson's, 1st, Division, 2d Corps, Army of the Potomac, from March 13, 1862; in 3d Brigade, 1st Division, 2d Corps, Army of the Potomac, from June, 1862; in 1st Brigade, 1st Division, 2d Corps, from September, 1862; in the 4th Brigade, 1st Division, 2d Corps, Army of the Potomac, from February, 1863; and it was honorably discharged and mustered out, under Col. William Glenny, July 14, 1865, near Washington, D. C.
During its service the regiment lost by death, killed in action, 10 officers, 109 enlisted men; of wounds received in action, 3 officers, 50 enlisted men; of disease and other causes, 5 officers, 124 enlisted men; total, 18 officers, 283 enlisted men; aggregate, 301; of whom 1 officer and 31 enlisted men died in the hands of the enemy.

Sixty-fourth Infantry.—Cols., Thomas J. Parker, Daniel C. Bing-ham, Leman W. Bradley, William Glenny; Lieut-Cols., Daniel G. Bing-ham, Enos C. Brooks, Leman W. Bradley, William Glenny, Theodore Tyrer; Majs., Enos C. Brooks, Leman W. Bradley, William Glenny, Lewis H. Fassett, Horatio N. Hunt, Theodore Tyrer, Albert F. Peterson. The 64th, the Cattaraugus regiment, was the outgrowth of the 64th militia and was recruited at Gowanda, Randolph, Otto, Rushford, Ithaca, Little Valley, Wellsville, Owego, Olean and Leon. It was mustered into the U. S. service at Elmira, in Dec., 1861, for three years; left the state for Washington on Dec. 10; was quartered near the capitol; in Jan., 1862, was assigned to the provisional brigade of Casey's division; on March 13, it became a part of the 1st brigade, 1st division, 2nd corps, Army of the Potomac, and proceeded to the Peninsula with the general advance under McClellan. The regiment was present during the siege of Yorktown, but received its first real test at Fair Oaks, where it behaved with great steadiness under a fire which killed or wounded 173 of its members. It was active in the Seven Days' battles; then went into camp at Harrison's landing; arrived at Manassas too late to participate in that battle; took a prominent part in the battle of Antietam, where Gen. Richardson was killed and Gen. Hancock succeeded to the command of the division. At Fredericksburg, in the famous assault of Hancock's division on Marye's heights, the loss of the regiment was 72 in killed and wounded and immediately afterward it went into camp near Falmouth. At Chancellorsville in May, 1863, the 64th was placed on the skirmish line under Col. Nelson A. Miles and shared in the stubborn defense made by the regiments under his command, for which they won the highest commendation. The regiment moved in June to Gettysburg, where the division, under Caldwell, fought brilliantly on July 2 in the celebrated wheat-field and on the 3d defended its position stubbornly against Pickett's assault. It lost at Gettysburg 98 killed, wounded or missing out of 205 engaged. The 2nd corps fought in October at Auburn and Bristoe Station, where the 64th suffered severe loss. It participated in the Mine Run movement and established winter quarters near Brandy Station. During the winter of 1863-64 a sufficient number of the regiment reenlisted to secure its continuance in the field as a veteran organization, but after the original members not reenlisted were mustered out in the autumn of 1864 it was necessary to consolidate it into a battalion of six companies. It served through the Wilderness campaign, throughout the siege of Petersburg and in the pursuit of Lee's Army to Appomattox, losing 16 in killed and wounded at Farmville. Out of a total enrollment of 1,313, the regiment lost during service .182 by death from wounds and 129 from other causes. The division in which it served saw the hardest service and suffered the most heavy losses of any in the army and the 64th was one of the finest fighting regiments in the war. It bore without flinching the severest trials and won fame and glory for itself and the state. It was mustered out at Washington, July 14, 1865. 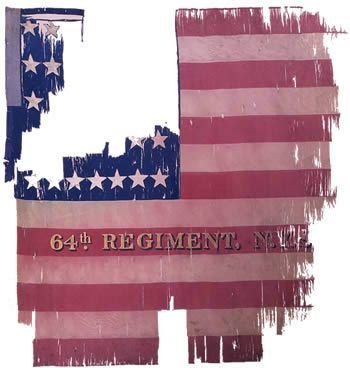 The Board of Supervisors of Cattaraugus County presented the 64th Regiment with their Regimental Color and allegedly with this national color as well.… 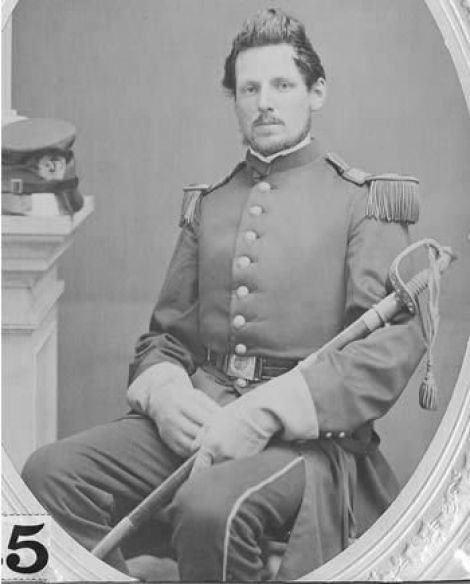 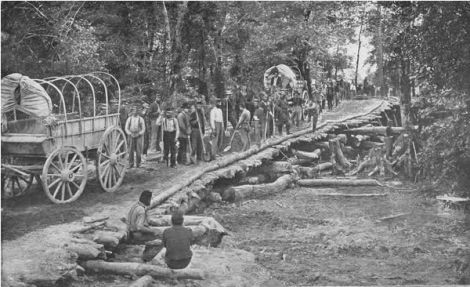 64th New York Infantry Regiment: Victory Over Swamp And Flood
Here we see the Fifth New Hampshire Infantry, reenforced by details from the Sixty-fourth New York and from the Irish Brigade, at work in the swamp strengthening the upper bridge across the Chickahominy so as to enable Sumner's troops to cross. The bridge had been completed on the night of May 29, 1862, and Colonel Cross of the Fifth New Hampshire Infantry was the first man to ride over it. The heavy rains on the night of May 30th had so loosened the supports that when Sumner led his troops across on the afternoon of May 31st only the weight of the cautiously marching column kept the logs in place. Sumner named it the Grapevine Bridge because of its tortuous course. It enabled his troops to turn the tide at Fair Oaks and ward off Federal defeat on the first day. After they had crossed much of the Grapevine Bridge was submerged by the rising flood of the Chickahominy. Taken from Photographic History of the Civil War Volume I The Opening Battles, Francis Trevelyan Miller, editor-in-chief. New York: the Trow Press, 1911. Page 279. 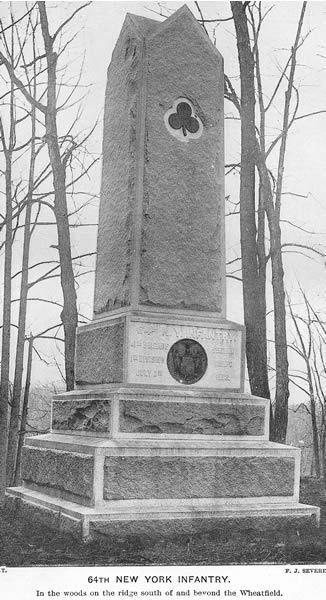 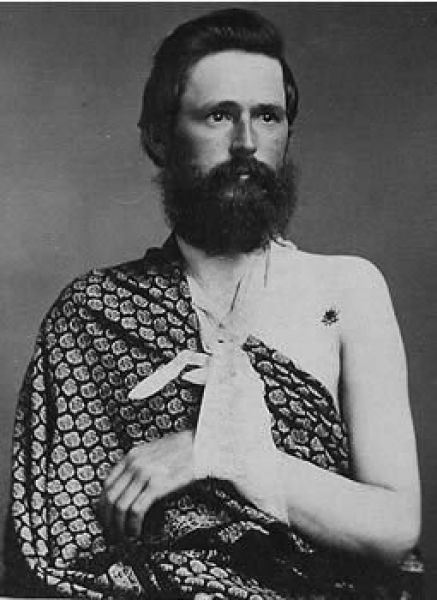 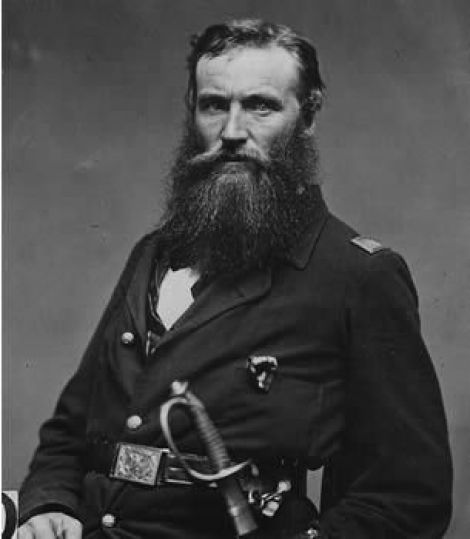 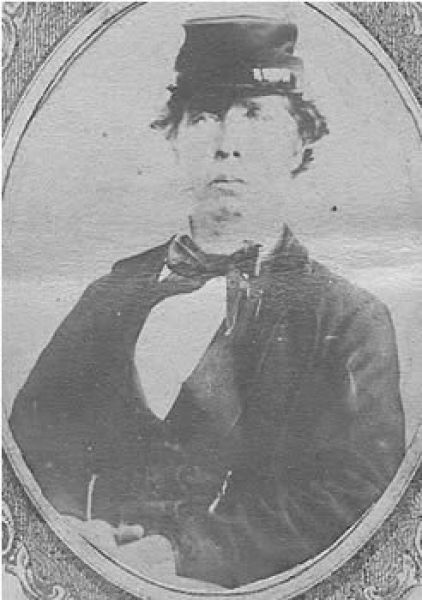 Crowley, Rodney. Letters, 1855-1891.
Description: ca. 25 items
Abstract: Letters to his family in Randolph written during service in the 64th New York Volunteers; later letters to his sister Julia Sheldon of Rockford, Illinois; and to his children. Also a few letters of Rufus Crowley, his father, and a subscription list for donations to James Williams of Randolph, whose house had burned, 1866.
Located at the Fenton Historical Society, 67 Washington Street, Jamestown, New York 14701.

Pettit, James M. Correspondence, 1816-1903, 1861-1863 (bulk).
Description: .6 cubic ft.
Abstract: Primarily Civil War correspondence from Pettit to his family and friends describing daily life in the Union Army, as well as battles (including Bull Run, Antietam, Chancellorsville, and Gettysburg), troop movements, his experiences in the field hospital at Fredericksburg after he was wounded at Gettysburg, and political developments both at home and abroad. Letters are sent from camps in Washington, D.C., Maryland, and Virginia. Also included are a few letters, 1880-1882, on the stationery of the Thomas Asylum for Orphan and Destitute Indian Children in Versailles, New York, describing conditions there.
Notes: Bio/History: Civil War Officer.
General Info: Inventory includes biographical note and description with excerpts from letters
Located at Brooklyn College. Special Collections, Brooklyn, NY.

Pittenger, J. S. Letters, 1861-1886 (bulk 1861-1864).
Description:.25 cubic ft. (1 box)
Abstract: Collection consists of letters sent by Pittenger to his wife Sarah from 1861-1864 and 1886. The letters provide a detailed account of volunteer army life, including troop movements, daily provisions, company drilling, construction of roads and buildings, illnesses, desertions, the Battles of Bull Run, Gettysburg and smaller skirmishes, and Sarah's loneliness and trouble in running the family business in Wellsville, New York.
Notes: Bio/History: Joshua S. Pittenger of Wellsville, New York, served as Captain of the 64th Regiment of the New York State Volunteers and witnessed the Battles of Bull Run and Gettysburg during his service in the Civil War from 1861-1864.
Additional information:
http://rmoa.unm.edu/docviewer.php?docId=wyu-ah07237.xml#id1164249696988
Located at the University of Wyoming.

Preston, Samuel E. Papers, 1899-1927
Description: 10 items.
Abstract: These papers consist primarily of a narrative letter, 22 January 1899 to Captain R.D. Parker regarding Preston's experiences of being taken prisoner, being confined at Andersonville and other prisons, and escaping. The papers also include copies of his official service record from the military pension bureau.
Notes: Bio/History: Civil War soldier; served in Company F or the 64th New York Infantry Regiment, 1861-1864; wounded at Gettysburg; captain at Spotsylvania, May 1864; confinement at Andersonville and other prisons until he escaped in November, 1864. Moved west after the war where he engaged in various business ventures.
General Info: Preferred citation: Samuel E. Preston Papers
Located at the New York State Library Manuscripts and Special Collections.

Raus, Edmund J. Where Duty Called Them: The Story of the Samuel Babcock Family of Homer, New York in the Civil War. Daleville, VA: Schroeder Publications, 2001.