Sixty-second Infantry.—Cols., J. Lafayette Ryker, David J. Nevin, Theodore B. Hamilton; Lieut.-Cols., David J. Nevin, Oscar V. Dayton, Theodore B. Hamilton, William H. Baker; Majs., Oscar V. Dayton, Wilson Hubbell, William H. Baker. The 62nd, "Anderson's Zouaves," composed mainly of members from New York city, Brooklyn, Albany, Troy and Saltersville, N. J., was organized at Saltersville and there mustered into the U. S. service June 30 and July 1, 1861, for three years. It left for Washington on Aug. 21, 1861, and in October was assigned to Peck's brigade, Buell's division, Army of the Potomac, which in March, 1862, became the 1st brigade, 1st division, 4th corps, Army of the Potomac, and reached the Peninsula in time to share in the operations before Yorktown, the battle of Williamsburg and the battle of Fair Oaks. In the Seven Days' battles the 62nd was closely engaged and suffered heavy loss. It arrived with the corps at Falmouth in time to participate in the battle of Fred-ericksburg, after which winter quarters were established across the river. In the Chancellorsville campaign the regiment met with its greatest losses, having been transferred in the preceding October to the 6th corps, and the 2nd and 3d divisions of which carried Marye's heights in a brilliant assault. The regiment was at this time attached to the 3d brigade, 3d division, with which it served until the reorganization of the Army of the Potomac just preceding the Wilderness campaign. It fought at Gettysburg; moved with the 6th corps through Boonsboro, Funkstown and Rappahannock Station; engaged in the Mine Run campaign, and went into winter quarters near Brandy Station. The original members of the regiment not reenlisted were mustered out at the expiration of their term of service but nine companies of the regiment remained in the service and in March, 1864, were assigned to the 1st brigade, 2nd division, 6th corps, where they served through the Wilderness campaign and the siege of Petersburg. In the opening of the fight in the Wilderness, the regiment lost 72 killed, wounded and missing. It also suffered severely in the first assault on Petersburg and at the Weldon railroad in June, 1864. At the time of Early's raid in July, the 6th corps was ordered to Washington and left its position before Petersburg on July 10. It joined in the pursuit of Early in the Shenandoah valley and was active at Charlestown, the Ope-quan, at Fisher's hill, and Cedar creek, in all of which the 62nd bore an honorable part. Returning to Petersburg in December, the troops established camp near the Weldon railroad and participated in the final assault on the fortifications and the pursuit of Lee's Army after the fall of the city, fighting their last battle at Sailor's creek, April 6, 1865. For a month the regiment was stationed at Fort Schuyler, N. Y. harbor, where it was mustered out on Aug. 30, 1865, having lost during its term of service 98 by death from wounds and 84 from other causes. 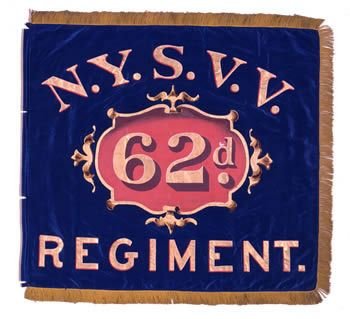 The 62nd Regiment, or “Anderson’s Zouaves,” mustered into service for three years on June 30 and July 1, 1861. When their three-year term expired,…

Hamilton, Frank Hastings. Frank Hastings Hamilton papers, 1863-1887.
Description:    200 items. 1 container. 0.4 linear feet.
Abstract:    Correspondence, telegrams, memoranda, memorial resolution, military documents, scrapbooks, clippings, and photographs relating to Hamilton's medical career in the Union Army during the Civil War and his role in the treatment of James A. Garfield before his death by assassination in 1881. Also documents Hamilton's postwar work as a surgeon and professor of medicine. Includes military records concerning Colonel Theodore B. Hamilton of the U.S. Army Sixty-second New York Infantry; Confederate army passes and currency; and personal notes and illustrations of a Confederate soldier and a Confederate guerilla.
Located at the Library of Congress

Mead, Walcott A., et al. Walcott A. Mead papers, 1856-1925.
Description:    1 volume
Abstract:    Seventeen year-old Walcott A. Mead of Shoreham, Vermont enlisted in Company D, 14th Vermont Volunteer Infantry Regiment on August 29, 1862. The 14th Vermont was a one year regiment and was mustered out July 30, 1863. Most of Mead's military service was spent at Fairfax Courthouse and Wolf Run Shoals in Northern Virginia in the defense of Washington, D.C., until his regiment was ordered to march with the Army of the Potomac to Gettysburg, Pennsylvannia on June 24, 1863. Most of his letters, written between November 4, 1862 and June 30, 1863, speak of family matters, camp life and his time in an Army hospital due to illness. In addition to his war time letters there is a copy of his Army discharge certificate and a pension certificate. Of particular interest is a short memoir of the grueling march to Gettysburg and events he observed during the battle. In addition to his war time letters, there are many patriotic envelopes and letterheads. Also included in the collection are war time letters of William McAlister of Company K, 62nd New York Infantry Regiment and Edwin C. and Francis Peck of Company G, 2nd Michigan Infantry Regiment. As well there are letters written by Peck family members to Henry W. Peck, giving news of their children who are serving in different regiments. The collection also includes several letters written to Walcott A. Mead by a school friend, John Cooper, dating from 1856 and 1857. Cooper had moved to Parkesburg, Pennsylvania and wrote about the weather, politics, robbers, and his intention to move to Illinois. All of the letters and papers are arranged in a scrapbook with labels by family members.
Located at the Vermont Historical Society.

Tierney, John (Compiler). Anderson Zouaves. http://andersonzouaves.zz.mu/index.php?title=Main_Page
This is an Anderson Zouaves Wiki and is in the process (and will be in a continual process) of being updated. In time it will be the online repository for all things related to this American Civil War Regiment. Wherever possible this wiki will include genealogical information on members of the regiment in the hope of connecting living descendants with their family's Civil War past.